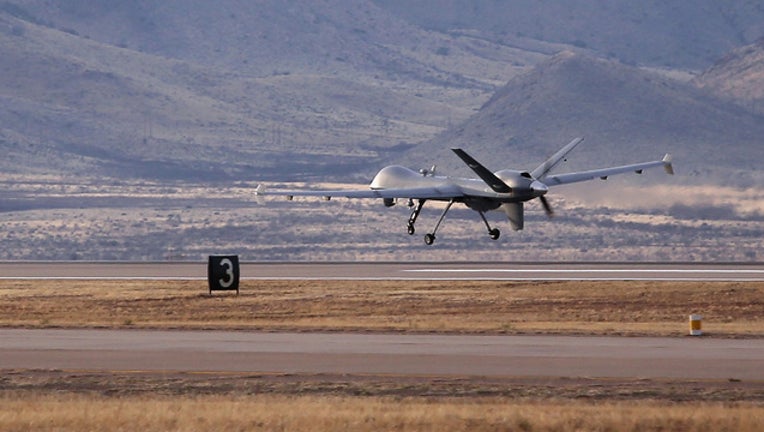 A Predator drone operated by U.S. Office of Air and Marine (OAM), takes off for a surveillance flight near the Mexican border on March 7, 2013. (Photo by John Moore/Getty Images)

WASHINGTON (FOX NEWS) - A U.S. high-altitude drone was shot down Thursday by an Iranian surface-to-air missile over the Strait of Hormuz amid heightened tensions in the region after last week’s attacks on two oil tankers, a source told Fox News.

The U.S. Navy’s MQ-4C drone, , which has the same wingspan as a Boeing 737, was over international airspace at the time and about 17 miles from Iran, the source said.

Capt. Bill Urban, a U.S. Central Command spokesman, declined to comment on the reported attack when reached by the AP, but he said no drone was over Iranian territory.

RNA news agency, the country’s state-run news arm, identified the drone as an RQ-4 Global Hawk. Iran’s Revolutionary Guard confirmed the shooting and said it occurred when the drone entered into its airspace in southern Iran’s Hormozgan province.

The U.S. said Iran fired a missile at another drone last week that responded to the attack on two oil tankers near the Gulf.

Another senior U.S. official told Fox News last week that an MQ9 Reaper drone was fired on by the Iranians shortly after it arrived at the scene where the MV Altair tanker sent out a distress signal.

Secretary of State Mike Pompeo has blamed Iran for the "blatant assault" on oil tankers in the Gulf of Oman.

After the tanker incident, Pompeo said his assessment was based on "intelligence, the weapons used, the level of expertise needed to execute the operation, recent similar Iranian attacks on shipping, and the fact that no proxy group operating in the area has the resources and proficiency to act with such a high degree of sophistication.”

Get updates on this story from FoxNews.com