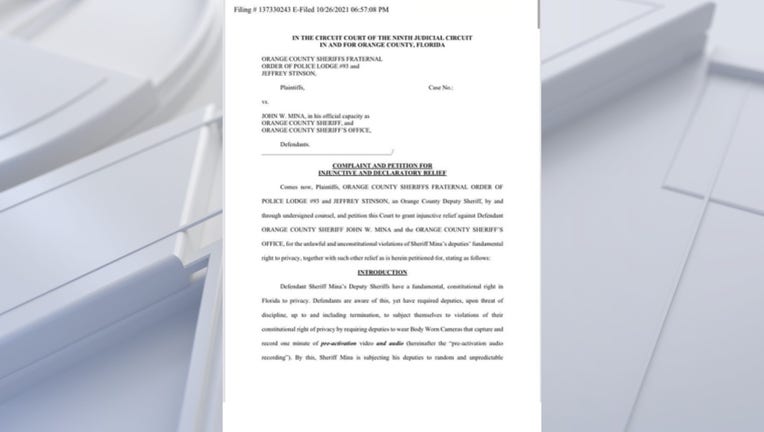 ORANGE COUNTY, Fla. - The union that represents Orange County deputies is suing both the sheriff and the agency, saying their right to privacy is being violated because of a new body camera policy.

From the moment an Orange County deputy puts on a body camera, the camera and mic are always hot.

"Every minute that goes by that previous minute is erased by a fresh minute. So, it’s always recording you."

Once the bodycam is activated, one minute of pre-recorded video gets saved. But now, a new policy at the Orange County Sheriff’s Office will record both audio and video, one minute before a body camera is activated.

"Capturing private conversations with their significant other, their loved ones, friends, other deputies. At the end of the day, that’s going to be captured somewhere in an evidence system that’s owned and operated the Orange County Sheriff’s office."

"Those are private conversations. We would never release those to the public. Unless there was some law enforcement reason."

Sheriff John Mina says he changed the policy to protect civilians and deputies.

"It helps us be more transparent. It helps us to get a better picture of what happened. It helps the state attorney prosecute cases more effectively," he said.

Sheriff Mina says not having audio in the early stages of an arrest can make it difficult.

"Especially in critical, fast happening incidents, we’re not capturing all the audio. So, that’s causing certain cases to be dropped here at the State Attorney’s Office," Sheriff Mina said.

Sheriff Mina says he'll revert back to the old policy if he finds out the audio is used for something else.

But, the union says it shouldn't be there in the first place.

Stinson says many deputies work late and may call home to check in with their family, or two deputies may have a private conversation about work.

He says those conversations should remain private.