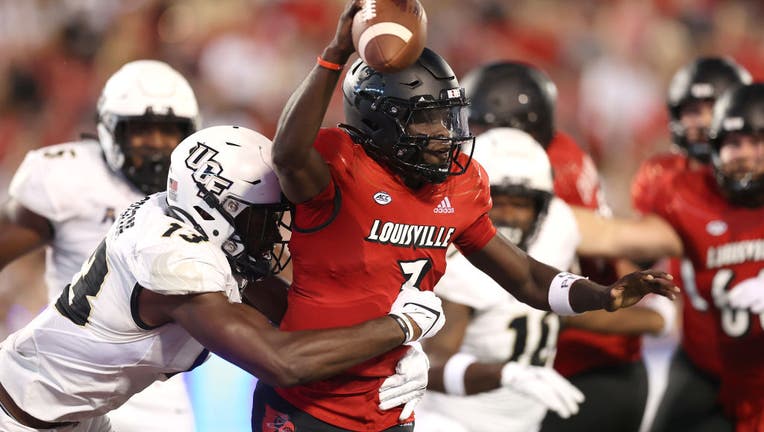 LOUISVILLE, KENTUCKY - SEPTEMBER 17: Malik Cunningham #3 of the Louisville Cardinals runs with the ball while defended by Landon Wilson #13 of the UCF Knights at Cardinal Stadium on September 17, 2021 in Louisville, Kentucky. (Photo by Andy Lyons/Get

Central Florida looks to win its ninth straight at home and even the all-time series between the Knights and Louisville Cardinals, who won last year’s meeting 42-35 in Louisville. It’s the first of two Power Five opponents UCF will host over three weeks, looking to build momentum for the start of American Athletic Conference play on Oct. 1.

Louisville QB Malik Cunningham against a UCF defense that limited South Carolina State to just 91 yards total offense in the Knights’ 56-10 season-opening victory last week. Cunningham is No. 3 on the Cardinals’ all-time passing list, but is coming off having a streak of 30 consecutive games with at least one touchdown rushing or passing snapped during a 31-7 loss at Syracuse.

Louisville: A couple of transfers — RB Tiyon Evans (Tennessee) and WR Tyler Hudson (Central Arkansas) — had solid debuts for the Cardinals against Syracuse. Evans finished with 89 yards on 13 carries. Hudson had eight receptions for 102 yards.

UCF outgained South Carolina State 605 yards to 91 in its season opener, with Plumlee completing 20 of 31 passes for 308 yards. The Knights QB also rushed for 100 yards and a touchdown. ... Cunningham is third on Louisville’s career passing list with 10,801 yards. ... This is the first meeting between the teams in Orlando.