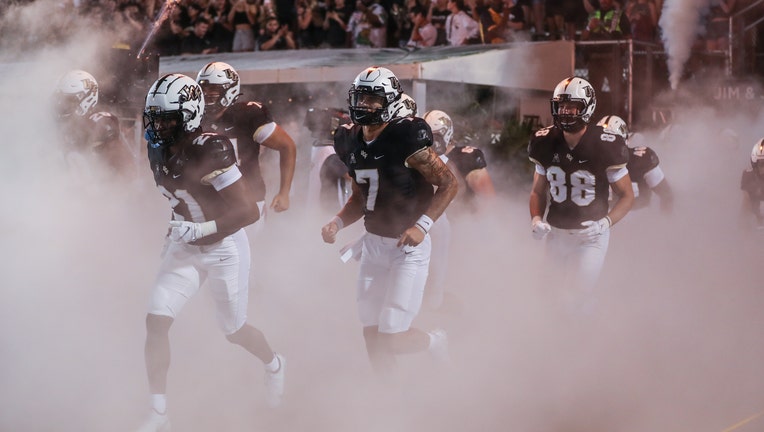 ORLANDO, FL - SEPTEMBER 02: Derek Gainous #21, Davonte Brown #7 and Jake Hescock #88 of the UCF Knights run out of the tunnel prior to a game against the Boise State Broncos at the Bounce House on September 2, 2021 in Orlando, Florida. (Photo by Alex

ORLANDO, Fla. - The Big 12 extended membership invitations Friday for BYU, UCF, Cincinnati and Houston to join the Power Five conference that will be losing Oklahoma and Texas to the Southeastern Conference.

The eight continuing members of the Big 12 unanimously approved the applications of the four schools.

The moves come six weeks after the SEC invited Texas and Oklahoma to join its league in time for the 2025-26 season. There remains the possibility that could happen sooner, but the Big 12 is focused on its additions for now.

After identifying its primary expansion targets last week, the Big 12 moved quickly to make it happen. The four schools had previously been vetted and interviewed by the league in 2016 when it considered expansion before staying at 10 teams.

BYU said all its sports will begin Big 12 schedules in the 2023-24 athletic season. BYU is an independent in football, but competes in the West Coast Conference for basketball and its Olympic sports.

UCF, Houston and Cincinnati are in the American Athletic Conference, which requires members to give 27 months’ notice if they plan to leave the league, though there could be negotiations between the schools and that league to reduce the time before beginning Big 12 play.

"Today’s news confirms what we have said all along regarding our status as a power conference," AAC Commissioner Mike Aresco said. "The irony that three of our schools are being asked to take the place of the two marquee schools which are leaving the Big 12 is not lost on us. Our conference was targeted for exceeding expectations in a system that wasn’t designed to accommodate our success."

Aresco said the ACC expected Houston, Cincinnati and UCF to "abide by the conference bylaws to ensure an amicable and orderly transition" as the league considers its options.

The Longhorns and Sooners have said they will honor their current contracts with the Big 12 and do not plan to join the SEC until 2025, when the conference’s current television rights contracts with ESPN and Fox run out. If they did stay, the Big 12 could have up to 14 members for at least a season or two.

With the additions, the Big 12 will be spread across eight states and three time zones. There are more than 2,300 miles between the UCF campus in Orlando and BYU in Provo, Utah. Once settled in the Big 12, the Knights and Cougars will both face average trips of around 1,300 miles each way when traveling for conference games.

West Virginia still will average about 1,100 miles each way on the road, but the Mountaineers at least picked up a relatively short trip with Cincinnati just more than 300 miles from Morgantown. Houston faces much shorter trips for its Texas-based foes.

"Joining the Big 12 Conference is a historic step in our institutional journey and signifies the tremendous growth and success attained academically and athletically over the last decade," Houston chancellor Renu Kahtor said.

Half of the league’s 12 charter members will remain when Texas and Oklahoma are gone.

Arkansas had left the SWC a few years earlier to join an expanded 12-team SEC, starting play there with South Carolina in the 1992 season. The SEC is now set to grow to 16 teams, with its last four additions all coming from the Big 12.

The Big 12 has been a 10-team league since the last significant round of conference realignment a decade ago that started with Nebraska going to the Big Ten and Colorado to the Pac-12, before Texas A&M and Missouri left for the SEC. TCU and West Virginia, the two teams added then, are both now in their 10th Big 12 season.