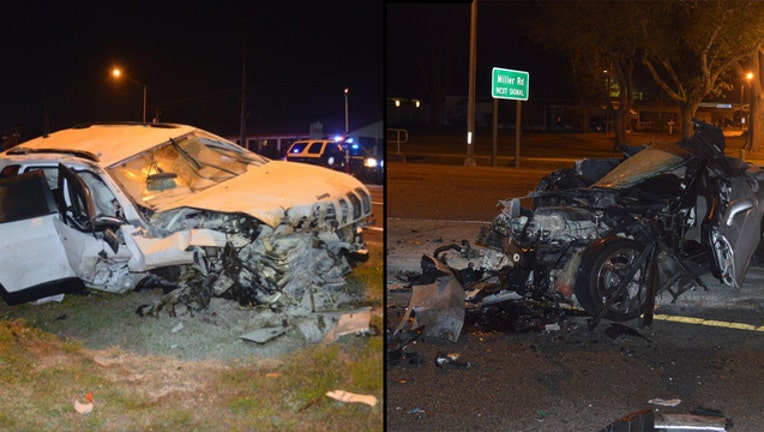 VALRICO, Fla. (FOX 13) - Two impaired drivers found themselves in a hospital Wednesday morning after a head-on collision, troopers said, with one driver traveling in the wrong direction.

Around midnight, Florida Highway Patrol troopers responded to the crash at State Road 60 and Miller Road in Valrico. Investigators said 70-year-old Walt Pfeifer was headed westbound in the eastbound lanes of S.R. 60 in his 2017 Jeep Cherokee.

Meanwhile, 34-year-old Matthew Bell was traveling eastbound on SR-60 in his 2012 Chevrolet Corvette, they said. As both drivers approached the Miller Road intersection, their vehicles crashed into each other. The Jeep overturned.

The crash closed the eastbound lanes of SR-60 for nearly six hours. Both drivers were taken to Tampa General Hospital. As of Wednesday morning, Pfeifer was recovering from serious injuries while Bell was recovering from critical injuries, troopers said.

Pfeifer was not wearing a seatbelt, troopers noted.

Images from the crash scene show the Corvette was mostly unrecognizable. The front of the car was destroyed, while the Jeep had serious front-end damage.

Investigators believe alcohol was a factor, and both drivers were operating their vehicles while intoxicated. Troopers said charges are pending.