LOS ANGELES - Twitter announced a new “pre-bunk” feature Monday, which will allow users to tell the difference between misinformation and genuine, factual news.

The company stated that users will be presented with a series of prompts that will alert them preemptively that they may encounter misinformation “and provide them with credible, factual information on the subject,” according to a Twitter spokesperson.

The first prompt addresses voting by mail ahead of the presidential election. It will inform users of the ensured safety and security when it comes to mail-in/absentee ballots. 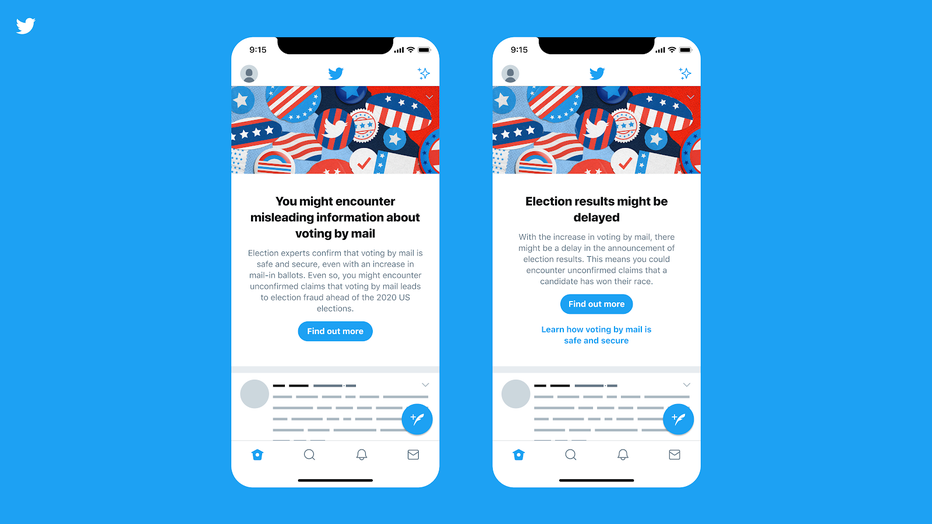 Twitter’s new prompts will be presented ahead of the 2020 presidential election.

“The first prompt will confirm that voting by mail is safe and secure, and the second will remind people that there might be a delay in the announcement of election results. Both will link to Twitter Moments that provide more context and compile the latest credible information on the topic from election experts, journalists and other authoritative news sources,” according to an emailed statement from Twitter.

RELATED: 'Can I change my vote' Google searches spike following Trump tweet: What you need to know

The prompts, which will be available in 42 languages, will appear in the home timeline of every user located within the United States, and will also appear when people type related terms, phrases or hashtags.

The rollout of the feature comes just days before the 2020 presidential election, and it’s just one of the many initiatives Twitter has launched to combat misinformation.

On Oct. 20, Twitter put into effect a change in its "retweet" process to help prevent abuse and the spread of misinformation.

"People who go to Retweet will be brought to the Quote Tweet composer where they’ll be encouraged to comment before sending their Tweet," according to the company's blog.

The big tech giant's aim is to no longer have users retweet at will, but instead prompt them to share written thoughts before sending messages and posts back out into cyberspace. A user can, however, leave the composer blank and still hit the retweet button and the retweeted message will proceed as it normally would.

“Twitter has a critical role to play in protecting the integrity of the election conversation, and we encourage candidates, campaigns, news outlets and voters to use Twitter respectfully and to recognize our collective responsibility to the electorate to guarantee a safe, fair and legitimate democratic process this November,” according to the company’s blog.