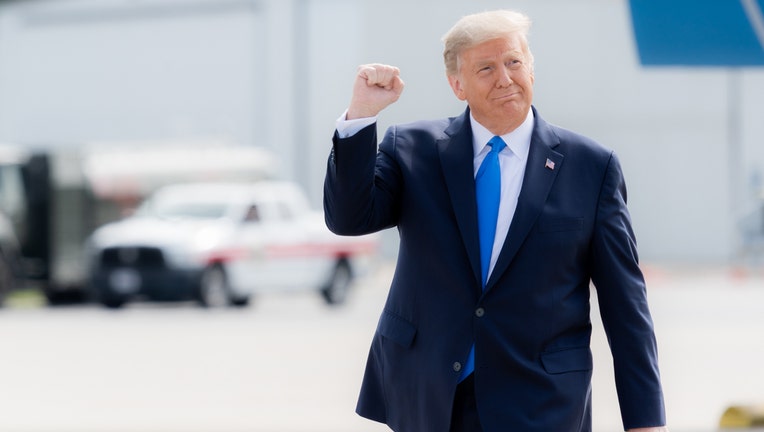 President Donald J. Trump gestures with a fist pump as he walks across the tarmac upon his arrival Thursday, Oct. 15, 2020, to Pitt-Greenville Airport in Greenville, S.C. (Official White House Photo by Shealah Craighead)

ATLANTA - In a TV interview on Tuesday, former President Trump expounded on his recent statements objecting to Major League Baseball's recent decision to move the All-Star Game out of Atlanta.

The league's move was a reaction to Georgia's recently passed voting legislation, which was signed into law by Republican Gov. Brian Kemp.

Trump suggested MLB was a "woke" organziation, during an interview with Newsmax. He also claimed fans were giving up on America's pastime and reiterated a previous call for a boycott of the sport.

"They're woke and woke is not good for our country," Trump told the network. "I think people are giving up on baseball anyway. You look at the fans ... everything is way down. I don't think anybody cares. But they shouldn't be doing that. They shouldn't be hurting the people of Georgia.

EXPLAINER: What is in Georgia's new election law?

"I'm just not very interested in baseball for the last number of years. You want to find a game, it's on every channel, and yet you can't find anything," he told Newsmax. "I would say boycott baseball ... why not?"

The "Midsummer Classic" was set for July 13 at Truist Park, home of the Atlanta Braves, until MLB decided Friday to shift the game to Coors Field in Denver, home of the Colorado Rockies.

The bill’s passage was motivated by suspected voter fraud in Georgia's presidential election — claims that were ultimately rejected as the state's votes were certified in Biden's favor. Republican supporters say the law is needed to restore confidence in Georgia’s elections following the contentious 2020 presidential election and the state's two U.S. Senate runoff elections in January.

Democrats and voting rights advocates say Georgia's new voting law, which Kemp signed March 25, would make it harder for people, particularly those of color, to vote.

What is in the new election reform law

An in-depth look at what is actually in the new election reform law.

Psaki refuted that the laws were similar, noting that Colorado mails absentee ballot requests to everyone who is eligible to vote and 94% of the state voted by mail in the 2020 election. She also said the state allows for a "range of materials" to be provided as identification to vote in person.

"But it’s important to remember the context here, the Georgia election bill was built on a lie. There was no widespread fraud in the 2020 election," Psaki continued. "Georgia’s top Republican election officials have acknowledged that repeatedly. What there was, however, was record-setting turnout, especially by voters of color.

"What we're seeing here is for pols who didn't like the outcome, they’re not changing their policies to win more votes, they’re changing the rules to exclude more voters," the press secretary said.

Colorado requires voters to show identification when voting in person, and the state says that first-time mail-in voters may be required to include a copy of their identification with their ballot. When it comes to verifying mailed ballots, the state relies on signature matching other than those from first-time mail-in voters, which is what Georgia did in the 2020 election.

In future elections, Georgia will check absentee ballots based on driver’s license numbers, state ID numbers, or other documentation, according to the Atlanta Journal-Constitution.

"For those who are keeping track, Georgia has 17 days of early voting. Colorado has 15. When it comes to cancel culture, facts don’t matter," Kemp wrote on Twitter.

Georgia enacted sweeping election reform last week that required voter ID for absentee voting rather than relying on signature matching for verification, limited ballot drop boxes to one per county or one per 100,000 voters, expanded early voting days, and standardized early voting hours to a minimum of 9 a.m. to 5 p.m. and a maximum of 7 a.m. to 7 p.m. The legislation barred outside groups from passing out food and water to those in line within 150 feet.

In addition, the law handed more election authority to the GOP-controlled state legislature. It states that the General Assembly is to select the chair of the state elections board, rather than the board being chaired by the Georgia secretary of state.

Get the latest updates to this story on FOXNews.com.