WASHINGTON - President Donald Trump delivered an update Friday on Operation Warp Speed, the White House effort to get a COVID-19 vaccine to market.

The event marked the president’s first address in more than a week, and his first since major news outlets, including the Associated Press and FOX News, projected that Joe Biden won the 2020 presidential election.

Trump was briefed by advisers in the Oval Office earlier Friday on the subject and spoke from the Rose Garden.

Trump called U.S. work on the vaccine the “single greatest mobilization in U.S. history” in pioneering and developing vaccines and therapies in record time — five times faster than the 8 to 12 years it normally takes.

The address came at a time when the virus is surging again across the U.S., sending deaths, hospitalization and new infection figures soaring. COVID-19 is blamed for more than 240,000 deaths and over 10.4 million confirmed cases in the U.S., according to data compiled by Johns Hopkins University.

On Monday, Pfizer Inc. said its COVID-19 vaccine may be 90% effective, based on early and incomplete test results. The company said it did not purposely withhold trial results, as Trump has suggested.

Trump said that “millions of doses” of the vaccine are ready to be distributed across the country and that by April the vaccine will be available to the general population “with the exception of places like New York state.”

The president suggested that for “political reasonings,” New York would not immediately receive the vaccine, saying that Gov. Andrew Cuomo does “not trust where the vaccine is coming from.”

“We won’t be delivering it [the vaccine] to New York until we have authorization to do so and that pains me to say that,” Trump said. 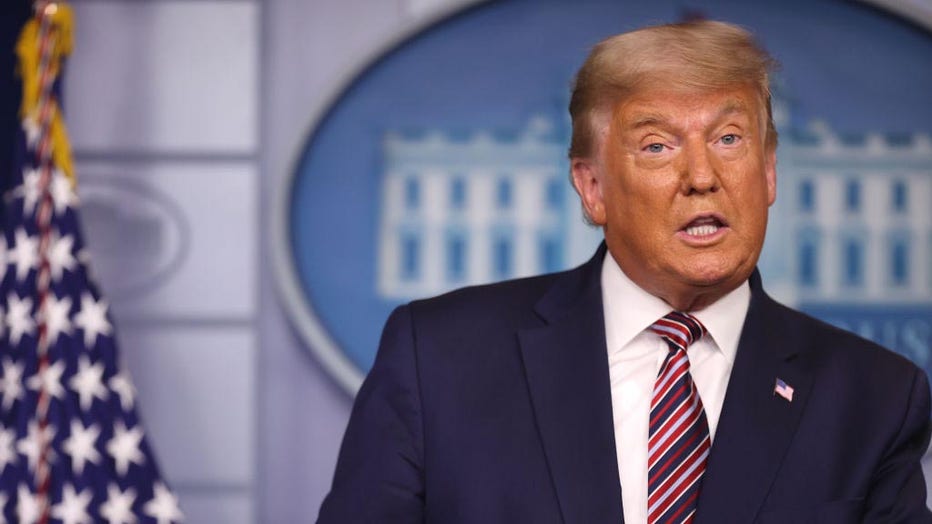 President Donald Trump speaks in the briefing room at the White House on Nov. 5, 2020 in Washington, D.C. (Photo by Chip Somodevilla/Getty Images)

Both Cuomo and California Gov. Gavin Newsom have said that their states will review the safety and efficacy of the vaccine before distributing it to residents.

California, Washington, Oregon and Nevada announced in October that they are working together as part of a COVID-19 "Scientific Safety" review workgroup, where their own scientists will independently review any vaccine approved by the FDA for distribution.

“We believe in science, public health and safety,” Washington Gov. Jay Inslee said in a statement in October. “Any COVID vaccine must be guided by the expertise of scientists and medical professionals and that’s just what this workgroup will do. The Western States Pact will continue working together to ensure the best health outcomes for everyone in our states.”

Trump said Friday that “this administration will not be going to a lockdown.”

“Hopefully whatever happens in the future, who knows, which administration it will be, I guess time will tell, but I can tell you this administration will not go to a lockdown,” Trump said.

Many governors and other elected officials are similarly showing little appetite for imposing the kind of lockdowns and large-scale business closings seen last spring. Some also continue to resist issuing statewide mask rules.

Among the reasons given: public fatigue, fear of doing more damage to already-crippled businesses, lack of support from Washington, and the way efforts to tame the virus have become fiercely politicized.

Meanwhile, President-elect Joe Biden called on the Trump administration to take “urgent action” on fighting the recent surge in coronavirus cases across the U.S.

In a statement released just moments before Trump’s address, Biden said, “I renew my call for every American, regardless of where they live or who they voted for, to step up and do their part on social distancing, hand washing, and mask wearing.”

PBS’ Yamiche Alcindor shared a copy of Biden’s statement to Twitter on Friday.

Public health experts worry that Trump’s refusal to coordinate with the Biden transition team during the final two months of his presidency will only worsen the effects of the virus and hinder the nation’s ability to swiftly distribute a vaccine next year.

“It’s a big problem,” said Dr. Abraar Karan, a global health specialist at Brigham and Women’s Hospital and Harvard Medical School. “The transition is not going to happen until January, and we are in a complete crisis right now. We already know where this is headed. ... It’s not good enough to say we’re going to wait until the next president to address this.”

Thus far, Trump has refused to concede to the president-elect and instead has challenged the results in a barrage of lawsuits in states that broke for Biden. Experts said the Trump campaign’s legal effort faced long odds given the Electoral College tally and recent court rulings that found no evidence of widespread vote fraud.

RELATED: 2020 election was ‘most secure in American history’, according to CISA committees

The president’s only public event this week was an appearance at a Veterans Day observance ceremony at Arlington National Cemetery. Trump’s relative silence comes as numerous White House and campaign officials have tested positive for the virus in recent days.

Trump’s travel despite the virus has taken its toll on his protectors as well. The U.S. Secret Service is also experiencing a significant number of cases, many believed to be linked to the crush of rallies in the closing days of the campaign, according to one official.

The White House coronavirus task force held its first post-election meeting Monday. Officials discussed the rising case numbers and the promise of a vaccine in development by Pfizer, and they recognized the service of Navy Rear Adm. John Polowczyk, a member of the task force who retired Monday.

But Trump, who does not take part in the task force meetings, remains preoccupied with last week’s election results, according to the Associated Press. He has yet to weigh in on the recent spike in virus cases that has state and local officials scrambling and hospitals concerned about their ability to treat those stricken.

In the closing days of the campaign, Trump sought to reassure Americans that the country was “rounding the corner” on the virus, and he wrongly predicted that Democrats' focus on the disease would go away right after the election.

The president pushed a sunny public tone even after he tested positive for the virus in early October and was hospitalized for three days. His wife, Melania, and teenage son, Barron, also contracted the virus.

Biden, for his part, largely framed the election as a referendum on Trump’s handling of the pandemic. He has made addressing the virus his top priority as he moves forward with his transition. He spoke by phone Thursday with House Speaker Nancy Pelosi and Senate Minority Leader Chuck Schumer about the intensifying pandemic and prospects for passage of a COVID-19 relief bill in the lame duck session of Congress.

Incoming White House chief of staff Ron Klain said Biden will appoint a “COVID coordinator” who will lead the administration’s pandemic response. Klain, speaking on MSNBC Thursday night, said the individual will have “direct access” to the president and will brief him daily on the pandemic. A team of people underneath the coordinator will supervise vaccine distribution, address supply chain disruptions and improve access to testing.

Lawrence Gostin, a public health expert at Georgetown University’s law school, said Biden will only be able to “scratch the surface” of tackling a pandemic that could be a “raging forest fire” by the time he takes office on Jan. 20.

He added that even the good news on Pfizer’s development of a vaccine that showed 90% efficacy could be diminished if Trump doesn’t begin coordination efforts with Biden’s team on how to roll out the vaccine. Some public health experts believe the task of persuading Americans to take the vaccine and widely distributing it could be as complicated as the vaccine's development.

“I fear the next three months ahead could be the worst we’ve faced during the pandemic,” Gostin said. “America is like a ship at storm, and the captain has decided to go play golf.”

The story was reported from Cincinnati. The Associated Press contributed.