For people with severe but stable heart disease from clogged arteries, a procedure to improve blood flow may reduce chest pain more than just taking medication, but it won't cut patients' risk of having a heart attack or dying over the following few years.

PHILADELPHIA (AP) - People with severe but stable heart disease from clogged arteries may have less chest pain if they get a procedure to improve blood flow rather than just giving medicines a chance to help, but it won't cut their risk of having a heart attack or dying over the following few years, a big federally funded study found.

The results challenge medical dogma and call into question some of the most common practices in heart care. They are the strongest evidence yet that tens of thousands of costly stent procedures and bypass operations each year are unnecessary or premature for people with stable disease.

That's a different situation than a heart attack, when a procedure is needed right away to restore blood flow.

There might even be harm: To doctors' surprise, study participants who had a procedure were more likely to suffer a heart problem or die over the next year than those treated with medicines alone.

Hochman co-led the study and gave results Saturday at an American Heart Association conference in Philadelphia.

"This study clearly goes against what has been the common wisdom for the last 30, 40 years" and may lead to less testing and invasive treatment for such patients in the future, said Dr. Glenn Levine, a Baylor College of Medicine cardiologist with no role in the research. Some doctors still may quibble with the study, but it was very well done "and I think the results are extremely believable," he said.

About 17 million Americans have clogged arteries that crimp the heart's blood supply, which can cause periodic chest pain. Cheap and generic aspirin, cholesterol-lowering drugs and blood pressure medicines are known to cut the risk of a heart attack for these folks, but many doctors also recommend a procedure to improve blood flow.

That's either a bypass — open-heart surgery to detour around blockages — or angioplasty, in which doctors push a tube through an artery to the clog, inflate a tiny balloon and place a stent, or mesh scaffold, to prop the artery open.

Twelve years ago, a big study found that angioplasty was no better than medicines for preventing heart attacks and deaths in non-emergency heart patients, but many doctors balked at the results and quarreled with the methods.

So the federal government spent $100 million for the new study, which is twice as large, spanned 37 countries and included people with more severe disease — a group most likely to benefit from stents or a bypass.

All 5,179 participants had stress tests, usually done on a treadmill, that suggested blood flow was crimped. All were given lifestyle advice and medicines that improve heart health. Half also were given CT scans to rule out dangerous blockages, then continued on their medicines.

The others were treated as many people with abnormal stress tests are now: They were taken to cardiac catheterization labs for angiograms. The procedure involves placing a tube into a major artery and using special dyes to image the heart's blood vessels. Blockages were treated right away, with angioplasty in three-fourths of cases and a bypass in the rest.

Doctors then tracked how many in each group suffered a heart attack, heart-related death, cardiac arrest or hospitalization for worsening chest pain or heart failure.

After one year, 7% in the invasively treated group had one of those events versus 5% of those on medicines alone. At four years, the trend reversed — 13% of the procedures group and 15% of the medicines group had suffered a problem. Averaged across the entire study period, the rates were similar regardless of treatment.

If stents and bypasses did not carry risks of their own, "I think the results would have shown an overall benefit" from them, said another study leader, Dr. David Maron of Stanford University. "But that's not what we found. We found an early harm and later benefit, and they canceled each other out." 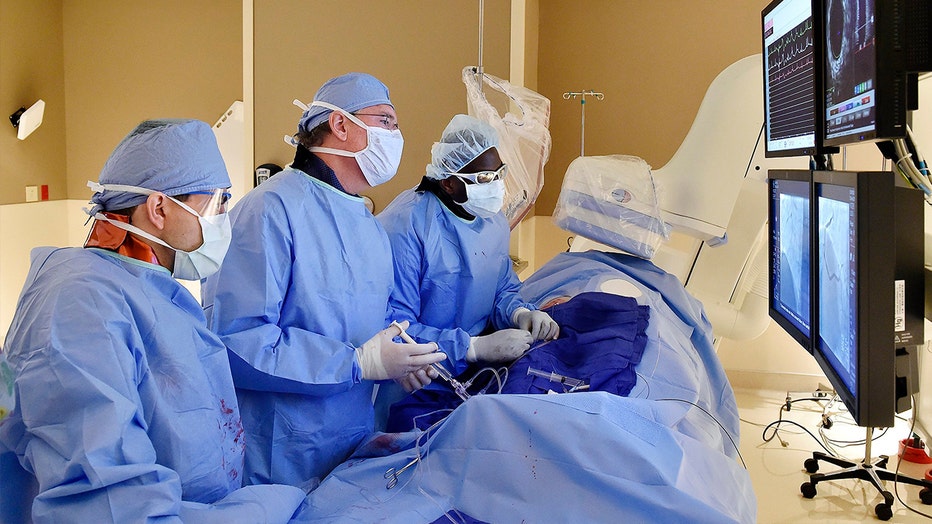 Why might medicines have proved just as effective at reducing risks?

Bypasses and stents fix only a small area. Medicines affect all the arteries, including other spots that might be starting to clog, experts said.

Drugs also have improved a lot in recent years.

Having a procedure did prove better at reducing chest pain, though. Of those who had pain daily or weekly when they entered the study, half in the stent-or-bypass group were free of it within a year versus 20% of those on medicines alone. A placebo effect may have swayed these results — people who know they had a procedure tend to credit it with any improvement they perceive in symptoms.

Dr. Alice Jacobs, a Boston University cardiologist who led a treatment-guidelines panel a few years ago, said any placebo effect fades with time, and people with a lot of chest pain that's unrelieved by medicines still may want a procedure.

The bottom line: There's no harm in trying medicines first, especially for people with no or little chest pain, doctors said.

When told they have a problem that can be fixed with a stent, "the grand majority of patients in my experience will opt to undergo that procedure” to get improvement right away, said Dr. Jay Giri, a cardiologist at the University of Pennsylvania with no role in the study.

Maryann Byrnes-Alvarado is not among them. The 66-year-old New York City woman said she joined the study six years ago after having trouble walking, which "scared me to death," but so did the idea of a heart procedure.

She was relieved when she was assigned to the medication treatment group. Her doctor altered her blood pressure medicine, added a cholesterol drug and aspirin, and adjusted her diet. Now her risk factor numbers are better and she can walk again without difficulty.

"I believe I got the best care that I could get" and avoided an operation, she said.