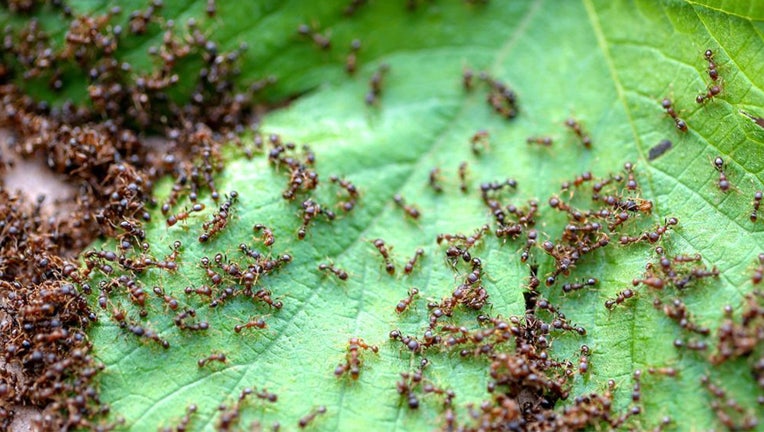 FILE - Swarm of ants gathering on a leaf. (CFOTO/Future Publishing via Getty Images)

In a recent study published in PNAS on Sept. 19, researchers estimated there are 20 quadrillion ants walking around on Earth. That’s 20 followed by 15 zeros — that’s a lot.

Scientists poured over 489 different studies that reported on values of the average ant population on the planet, the lead author of the study, Patrick Schultheiss, told FOX TV Stations.

"We calculated average ant densities for the different ecosystems on Earth (tropical forests, temperate grasslands ...) and extrapolated to the global surface area of each ecosystem. All ecosystems together give us the total number of ants in the world," Schultheiss explained.

Why count all the ants?

Researchers wanted a better understanding of where ant populations are denser compared to others, Schultheiss explained.

"This can tell us a lot about the ecological roles that ants perform," Schultheiss said.

The study revealed ant populations are far more prevalent in tropical climates, a fact that Schultheiss claims was unknown until now.

"There are particularly many ants in tropical forests and tropical drylands such as savannas," he said.

They may be annoying, but ants are important

While they may invade your homes and your picnics, ants are far more than just pests, according to Schultheiss. They’re an essential part of our fragile ecosystem.

"Ants are absolutely necessary to ensure that natural processes continue to run. Without ants, natural areas would quickly accumulate a lot of dead material, both from plants and from animals, and the soil would compact and become hard," Schultheiss said.

Schultheiss hopes to continue further research on ant populations to determine whether or not their numbers have increased or declined over time.

"This is the first time that anyone has tried to count all ants on Earth, and not just guess at their number. We hope to provide an answer to this in our next study," he said.