Disney and Uinversal hotels to close on Friday

Both Disney and Universal on Monday announced it would be closing Disney Springs and CityWalk, respectively, at midnight on Monday. Guests at the resort hotels will be asked to leave no later than Friday.

ORLANDO, Fla. - Families staying at Disney-owned hotels tell FOX 35 News they weren’t expecting the news they got Monday morning, that they need to be out of their hotels by 5 p.m. Friday.

“I was a little bit in shock because I actually didn’t think they’d close the hotel. I thought that would be still open. Still people coming in,” Liam McMullen said after his family got a knock on their hotel room door at breakfast time. “This lad gives us a letter, 'we’re shutting down Friday' and that was a shock,” McMullen said.

This family was already feeling a bit uneasy being on theme park property after Disney closed all of their parks.

They say the mood at the Saratoga Springs Resort was different Monday.

"Everyone is feeling a little bit anxious about it. Feels like we don’t know where we’re going," McMullen said. 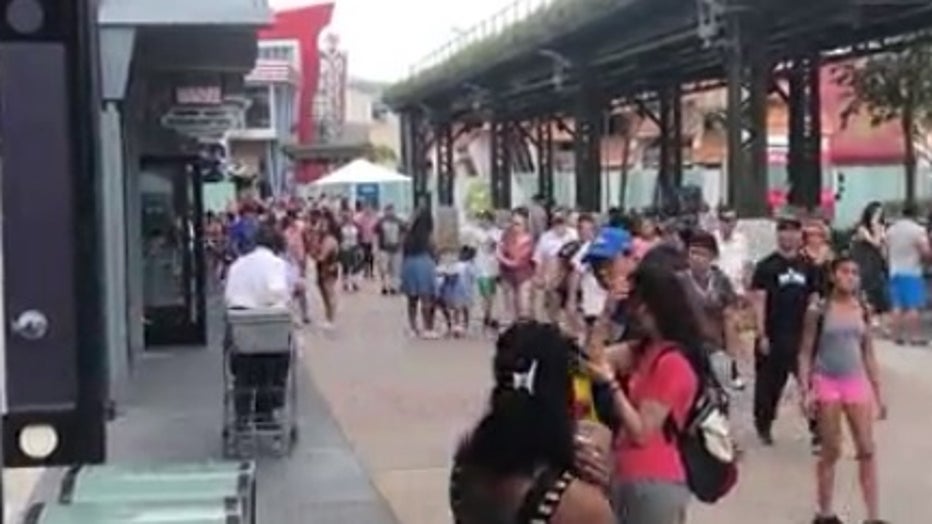 His wife said the closest Starbucks to them on property was only doing takeaway food on Monday and that the restaurant where they had breakfast was also changing their procedures. No condiments were on the tables.

“You can’t pick anything up. No sugars, nothing like that. You’ve got to ask for it, which is good because nobody’s got their sticky fingers on it, I guess.”

Disney also announced that it is closing all Disney-owned stores at close of business Monday, including those at Disney Springs.

Disney Springs is still open, saying in a statement that it will let individual vendors decide if they’d like to keep their doors open.

The Starbucks located inside Disney Springs was already closed Monday.

At lunchtime, parking garages at Disney Springs were less than half full.

The popular attraction was noticeably less busy than usual during Spring Break.

Universal Orlando announced that Universal City Walk will be closing until at least March 31, as of close of business Monday.

Universal also announced that guests will need to be out of their Orlando area hotels by Friday at 5 p.m.