Neil McDonald was greeted with cheers after recovering from a nine-week stay in intensive care for COVID-19.

It’s a clear line of demarcation. On one side, the cold zone, where only a surgical mask, scrubs and shoe coverings are necessary. On the other, the warm zone, where the gloves come on. And the N95 mask. And the gown. And the hairnet. And the face shield.

Another step through glass doors and it’s into the hot zone, where coughing patients in green-patterned gowns await.

It’s outside this unit, in an area not marked by red tape or glass doors, that worries the nurses of “4 North” most.

It’s home: Where their kids play and their spouses sleep. Where PPE are only letters of the alphabet for toddlers learning their ABCs. Where the coronavirus is called “The Big Cough” and the worldwide pandemic means you have to stay at home because there are “little monsters” everywhere. 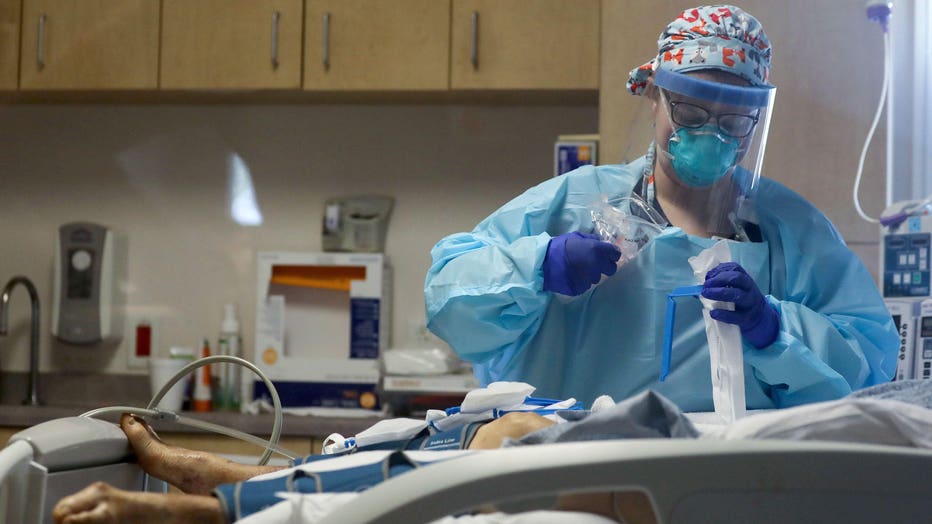 For the nurses of “4 North,” like their colleagues before them from New York and across the globe, home is fraught with uncertainty. Are they bringing the virus there? Are they exposing their partners and children? Should they isolate or quarantine themselves? Should they quit their jobs to keep their families safe?

As the pandemic rages on and cases climb throughout California, once again one of the nation’s hot spots, the answers remain unclear.

In the meantime, the nurses forge ahead. They care for their patients during 12-hour shifts, taking temperatures and holding their hands through gloves and wondering when — if — it will all end. And then they go home, to a new routine of changing clothes in the garage and rushing inside to shower before they can kiss their kids goodnight.

The Associated Press spent several days in the coronavirus unit at St. Jude’s and followed four nurses and their families after their shifts were over.

Here are their stories, from work and home:

She had just given birth to her youngest son, Arshan, prematurely and was supposed to return to work as a nurse on Valentine’s Day.

The coronavirus pandemic was slowly making its way to the United States. Information was scarce. The effects of the virus on babies, especially ones born premature, was unknown.

Michel took six weeks of unpaid maternity leave to buy time. She started a new job at St. Jude’s in March, returning to a field very different from the one she had left before giving birth. Now, she doubles up on purple gloves and seals her cellphone and IDs in plastic.

“I cry almost every night,” she said. “If it was only about me, it would be a different story.”

Her older son, 2-year-old Leonidas, knows not to hug his mother when she first gets home. He’ll sit outside as she showers after her shift, chattering about his day.

But there are things she can’t tell him about hers, like the time she spent three hours alone with a patient as she died, holding her hand and brushing her forehead, telling the woman over and over again that her family loved her.

Like when her own uncle died in Iran, succumbing to the virus within two days without access to a ventilator.

Instead, she teaches her son how to give “air hugs” and reads to him from children’s books with titles like “My Mom is a Nurse.”

Her mother has never kissed Arshan, and Leonidas misses his hugging his aunt. The toddler won’t be attending preschool with his new backpack anytime soon.

“I love them to death but did we make a mistake, having kids and bringing them into this world?” Michel pauses. “I never doubted before.”

“You just want to make sure they’re safe.”

For the month of April, the Cushing family lived apart.

Spencer Cushing spent his days — and some of his nights — at St. Jude’s, as a nurse caring for “step-down” patients recovering from the most serious COVID-19 symptoms. When his shifts were over, though, he wouldn’t go home to his wife, Eleanor, and young sons, 3-year-old James and baby Walter.

“We weren’t sure what was safe,” Cushing said. “But we knew what we were doing was the safest.”

So he rented his own apartment, returning there after his shifts as Eleanor put the boys to bed alone at their home.

James began sleepwalking. Walter grew four new teeth and learned to roll over. Eleanor gave up her own part-time night nursing shifts at St. Jude’s so she could stay home with the kids.

On his days off, Cushing would come over with breakfast burritos and groceries and talk to his family from a distance. Sometimes he came back at night, when the boys were sleeping, to have a socially distanced date with Eleanor over a patio campfire.

In the meantime, life at the hospital remained a cycle of donning and doffing protective gear. Some patients recovered. Others didn’t.

After a month, the Cushings decided Dad could come home. They felt safe with St. Jude’s preparations and plans, and the feared shortage of protective equipment hadn't hit Southern California.

“You couldn’t stay away for six months,” Eleanor said to her husband. “We’re going to be seeing these patients for a long time.”

Cushing moved back in. Eleanor returned to working one night shift a week. James stopped sleepwalking and began preparing for his fourth birthday.

The 28-year-old nurse knew it was coming. Comfort care had been arranged. His family, covered in PPE, was there. The Ativan and morphine, medications to relax him, were ready.

She took her 65-year-old patient off the machine that was helping him breathe. She held the man’s wife close, their blue gowns and purple gloves matching. She shed tears that clung to her face shield.

“Times like these, you will remember this,” Younkin’s grandmother, a nurse during the polio epidemic, later told her. “You don’t forget them.”

A few days later, the young nurse's voice broke as she sat cross-legged on a blanket during a sunny day in the park with her husband and giggling infant son, Jackson.

Becoming a nurse was her lifelong dream. She was an EMT at 18 years old. She wanted to follow her grandmother’s path.

Now her career has forced her to blur and blend her two lives. She agonizes over her every move in the hospital — “Did I put my gear on the right way, did I take it off the right way, did I touch something wrong accidentally?” — and leaves her shoes in the car after her shifts. She juggles decisions like breastfeeding during a pandemic and whether she should move out of her home to keep her son and husband safe.

“The thought of infecting either of them or my family,” she said, her voice catching and her husband, Cody, rubbing her back. “It’s crazy.”

The pandemic has forced conversations that no young mother should have with a young father, just months after the birth of their first child. They talk about what would happen if she were infected and hospitalized.

“If I were to die, don’t come,” Younkin told her husband emphatically. “Don’t risk yourselves.”

When Jackie Vargas is in the hospital, she feels safe. She’s been a nurse for 11 years, and she knows what dangers lurk in the COVID-19 ward where she’s been working long hours for months.

It’s at home where the anxiety escapes, its symptoms infecting her whole family. Vargas’ husband is a firefighter in Long Beach, and both are fighting to stay healthy so they can keep working.

So she doesn’t hug her mother-in-law, who is taking care of Vargas’ younger kids. Through a glass door, she visits her own mom and oldest daughter, Kaila, who has already had the virus and is staying with her grandma.

The ICU nurse who has cared for dozens of fevered, sick patients could do nothing more than monitor her 20-year-old’ daughter's fever over FaceTime. The necessary PPE — like face shields and gowns — is only for the hospital.

Watching her patients alone in the ICU, away from their families, can be emotionally draining.

She tries to soothe her mind and body with “the longest baths” filled with eucalyptus Epsom salt and lavender, as well as journaling and meditation. But sometimes it’s hard to calm down.

“Some of the stuff gets to me, the sad stories,” she said. “It takes me time to let go, let go of what I’ve seen.”

Her mother, who begged her for years to become a nurse, now pleads for her only child to quit her job. They haven’t touched in months, talking through that glass door as Vargas’ youngest children splash in Grandma Rose’s pool.

Her husband sleeps in the living room if he was exposed at work or one of her patients is very ill. If either of them contract COVID-19, the plan is to quarantine in a tent in the backyard.

Vargas worries about her son, Kai, and her 10-year-old daughter, Ava, watching them as they munch poolside on roasted chicken that Grandma Rose ordered from El Pollo Loco. She avoids kissing their faces and lingering too long at bedtime, but she knows it might not be enough.

“I don’t know where there’s a safe place for them to go,” she lamented.

So she goes back to the hospital.