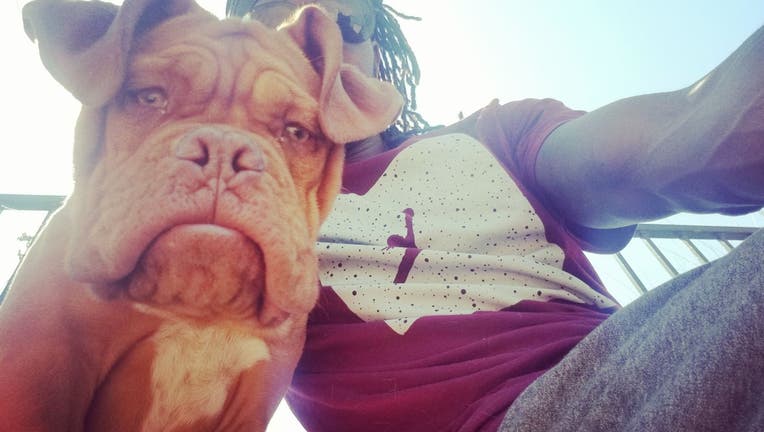 ARLINGTON, Texas - Police in Texas are asking for the public's help after a local veteran's service dog was stolen last month.

Someone took Rosalyn, a 2-year-old mastiff, from Emmanuel Bernadin's home after breaking in on Oct. 19, according to the Arlington Police Department.

The perpetrator also stole "several other items," the department said. But Bernadin told Fox 4 News he just wants his companion back.

"She's the sweetest thing," he said. "The days are just really hard without her."

Arlington Police Lt. Chris Cook said there are no suspects or witnesses at this time.

"People don't just steal dogs," he told Fox 4. "It's just not a common theme, so we're kind of baffled as to who would think in their right mind, 'We're not only going to take your property, but we're going to steal your dog.'"

Bernadin, an Iraq War veteran, told Fox 4 he was with a friend when he got a call from a neighbor telling him his sliding glass door was open.

He went home and found Roz was gone. Jewelry and electronics were also stolen, he said.

“I deal with a lot of night terrors," Bernadin told Fox 4. "It’s very hard to turn off the conditions of war, and Roz is there to wake me up at times when I shouldn’t be alone by myself asleep."

The veteran said he enlisted in the Navy in 2007 and served two tours in Iraq and Afghanistan, medically retiring after his second tour.

Police are asking anyone who might have information to call the Arlington Police Department at 817-459-6482 or leave an anonymous tip with Tarrant County Crime Stoppers at 817-469-8477.