Orlando police are searching for the suspects accused of stealing and totaling a Lamborghini that belonged to a Magic basketball player.

LAKE MARY, Fla. - An arrest has been made in the theft of a Lamborghini from the Fields Motorcars dealership in Orlando.

A 16-year-old suspect is accused of breaking into the business and taking the prized possession of Orlando Magic Guard-Forward Terrence Ross.  Ross said he received the car for his birthday just a few months earlier and took the vehicle in for servicing.

The break-in is alleged to have happened just after midnight on June 1.  Orlando police officers were notified of the incident about an hour later.

Deputies from the Orange County Sheriffs Office spotted the 2021 orange Lamborghini Urus at the intersection of Teresa and Long Rd. around 3 a.m. but it wasn't until approximately 5 a.m. that the vehicle was recovered following a crash in Maitland.  The suspect was not located. 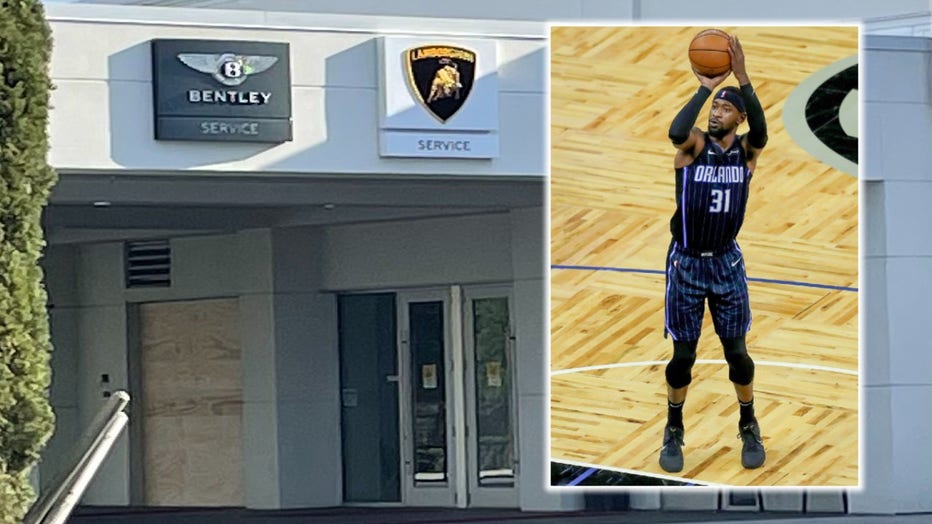 On July 1, detectives with the Orlando Police Department's Criminal Investigations Division identified the suspect who is now charged with burglary of a structure and third-degree grand theft.

"Detectives were able to piece together the events from that night thanks to several investigative methods, the prompt actions taken by patrol officers, and the assistance from witnesses and our law enforcement partners," read a statement sent to FOX 35 News.

The teen suspect is now in juvenile custody in Miami.

The Manufacturer's Suggested Retail Price (MSRP) of a Lamborghini Urus starts at roughly $218,009.

Here are the details released by OPD:

The suspect, an unknown male wearing a black hoodie, red ski mask, dark-colored shorts, and light-colored shoes is seen at the rear of the business looking into various vehicles and pulling on the door handles of vehicles backed up to the south side of the building utilizing a flashlight.

The gray Dodge Dart returns and backs up to the glass on the east side of the building (point of entry).

The suspect exits the business, runs back into the gray Dodge Dart, and exits the parking lot driving away.

The suspect is seen running back through the east side of the parking lot into the rear (south) side of the business, again jumping the barricade. The suspect approaches the orange Lamborghini, closes the hood, and uses the key fob that was taken from inside the business to enter the vehicle. He looks in the trunk, and then enters the driver’s seat.

OPD receives the call about the commercial burglary. Shortly after, the Dodge Dart used to break the glass was found parked at a nearby business. Officers determined that the gray Dodge Dart had been reported stolen from Orange County.

Deputies from the Orange County Sheriffs Office gained a visual of the 2021 orange Lamborghini Urus at the intersection of Teresa and Long Rd.

Officers from the Maitland Police department received a call about a crash involving an orange Lamborghini located in their jurisdiction. Maitland PD also received a call from a resident who said that a young Hispanic male was sleeping in the elevator at the 1000 block of Orlando Ave, Maitland. The caller said the juvenile asked for a ride but then left suddenly.