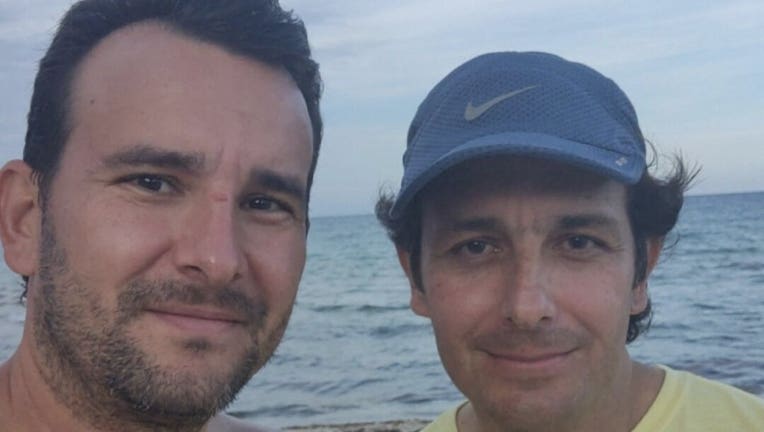 Luis Fernando Barth is pictured on the right. Besides him is his brother, Sergio Barth. (Photo from Sergio Barth via WSVN)

Officials said 90 victims have been identified and 88 next of kin notified. As of Wednesday evening, 240 people are accounted for and eight are potentially unaccounted for. All eight of those people have open missing persons reports with the Miami-Dade Police Department.

The latest update from Miami-Dade County officials revealed that one more victim has been recovered and identified as 51-year-old Luis F. Barth Tobar.

Meanwhile, a Florida judge on Wednesday approved the sale of the oceanfront property where a collapsed Florida condominium building once stood, with proceeds intended to benefit victims of the deadly disaster.

At a hearing, Miami-Dade Circuit Judge Michael Hanzman ordered that the process begin to sell the site of Champlain Towers South, which could fetch $100 million to $110 million according to court records.

"He wants us to start exploring a potential sale," Goldberg said of the judge in an email. "He did say he wants the land to be sold and the proceeds to go directly to the victims as soon as possible."

Goldberg said the decision did not necessarily preclude a buyer from turning at least a portion of the site into a memorial, as some people have advocated. Other survivors want the structure rebuilt so they can move back in.

Hanzman’s ruling came as part of a series of lawsuits filed in the wake of the June 24 collapse. A cause has not yet been pinpointed, although there were several previous warnings of major structural damage at the 40-year-old building.

MORE NEWS: Child tax credit payments to go out this week: What to know

The judge put the lawsuits on a fast track and authorized Goldberg to begin disbursing Champlain Towers insurance money to the victims and families.

The judge also approved returning $2.4 million in deposits that some Champlain condo owners had already made toward an assessment to pay for $15 million in planned major repairs.

In nearby Miami Beach, residents of an 82-year-old, two-story apartment building were ordered to evacuate because of concrete deterioration. The city ordered the evacuation of Devon Apartments on Monday and is giving residents until next Monday to leave the building, city spokeswoman Melissa Berthier said in an email Wednesday.

The apartment building is about 2 miles (3 kilometers) from Champlain Towers South.

After the collapse, Miami-Dade Mayor Daniella Levine Cava ordered an audit of all buildings over 40 years old. A condominium in nearby North Miami Beach also was ordered evacuated over safety concerns shortly after that audit started.

During a news conference Tuesday, Levine Cava said the number of people considered missing in the collapse has dwindled as authorities work to identify everyone connected to the building. The mayor said 14 people remain unaccounted for, which includes 10 victims whose bodies have been recovered but not yet identified — leaving potentially four more victims to be found.

"It’s a scientific, methodical process to identify human remains. As we’ve said, this work is becoming more difficult with the passage of time," Levine Cava said, adding that it is "truly a fluid situation."

The collapse left officials around the county grappling with concerns about older residential buildings.

Manny J. Vadillo, an attorney who represents the owners of the Devon Apartments, told WTVJ that they have worked "diligently" with the city since deciding in May to demolish the building by December. 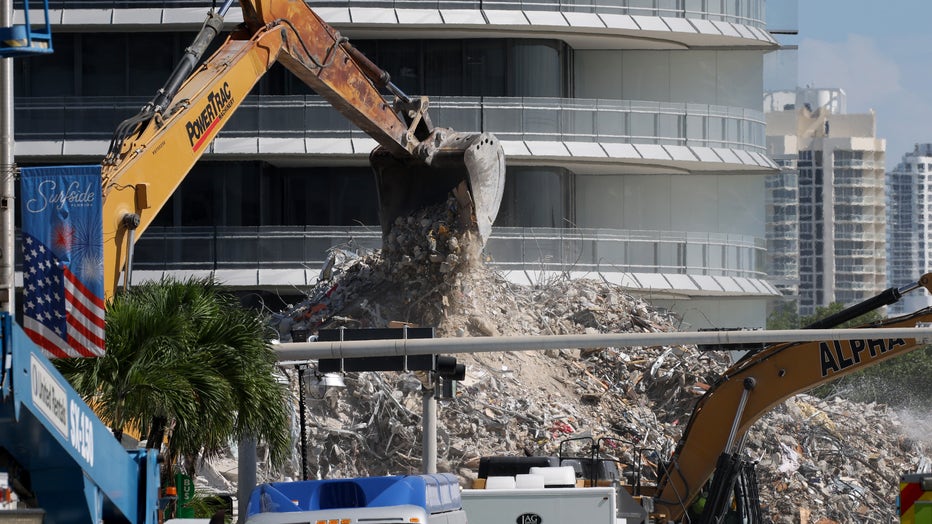 Construction equipment is used to dig through the mound of debris from the collapsed 12-story Champlain Towers South condo building is seen through fencing on July 11, 2021 in Surfside, Florida. The death toll from the collapse his risen to 90 people

He said they have started to "vacate the building in an orderly fashion," adding that 14 people remained inside. He said the owners are helping residents move.

"My clients are extremely sensitive to safety and, in fact, visited the property several times since last week to speak with tenants when communications started with the city to ensure tenants were not caught by surprise," Vadillo said. "Some tenants have been there many years."

Resident Esmart Romero told WSVN that he was not surprised the city deemed the building unsafe.

"If you look at the condition of this apartment, it’s not good," Romero said. "You get what you pay for."