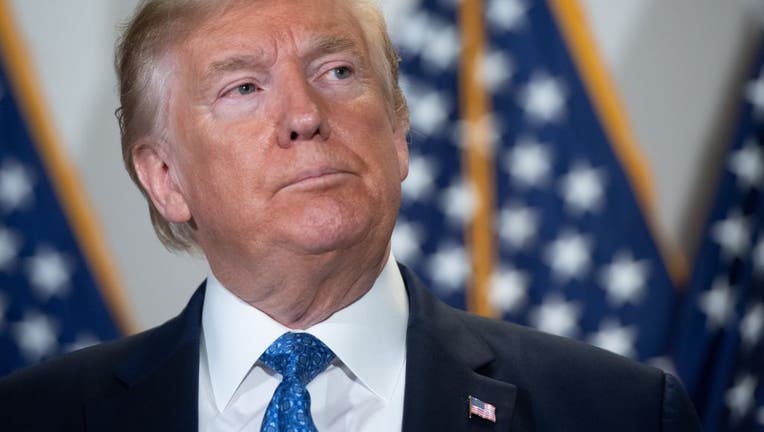 US President Donald Trump speaks during a press conference following the Senate Republicans policy luncheon on Capitol Hill in Washington, DC, on May 19, 2020.  (SAUL LOEB/AFP via Getty Images)

WASHINGTON - Former President Donald Trump is reacting to the Cleveland Indians recently changing its name to the Guardians.

The baseball club announced the name change Friday — effective at the end of the 2021 season — with a video on Twitter narrated by actor and team fan Tom Hanks. The decision ends months of internal discussions triggered by a national reckoning by institutions and teams to drop logos and names considered racist.

In a statement, Trump said the change is disrespectful to Native Americans.

"Can anybody believe that the Cleveland Indians, a storied and cherished baseball franchise since taking the name in 1915, are changing their name to the Guardians? Such a disgrace, and I guarantee that the people who are most angry about it are the many Indians of our Country. Wouldn’t it be an honor to have a team named the Cleveland Indians, and wouldn’t it be disrespectful to rip that name and logo off of those jerseys?  The people of Cleveland cannot be thrilled and I, as a FORMER baseball fan, cannot believe things such as this are happening. A small group of people, with absolutely crazy ideas and policies, is forcing these changes to destroy our culture and heritage. At some point, the people will not take it anymore!"

Owner Paul Dolan said last summer’s social unrest, touched off by the killing of George Floyd in Minneapolis, spurred his intention to change the name.

Dolan is expected to provide more details on the choice and background on the change at a news conference at Progressive Field before the Indians host the Tampa Bay Rays.

Dolan said the new name mirrors the city and its people.

"Cleveland has and always will be the most important part of our identity," he said in a statement. "Therefore, we wanted a name that strongly represents the pride, resiliency and loyalty of Clevelanders. ‘Guardians’ reflects those attributes that define us."