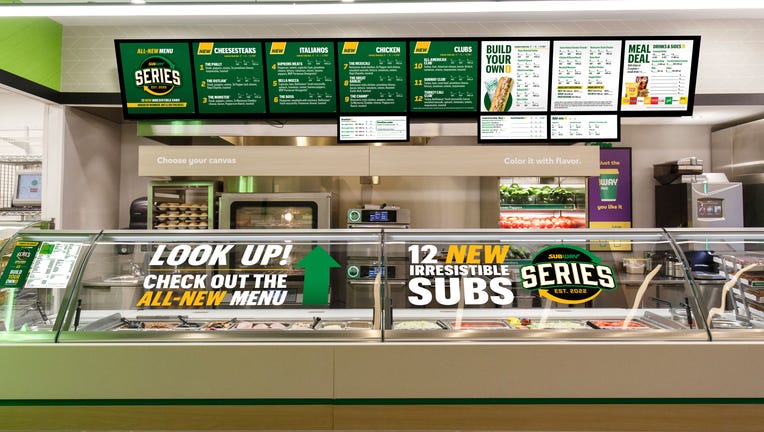 The new Subway Series menu is pictured at a restaurant location in a provided image.

MILFORD, Conn. - Subway is giving away up to 1 million free sandwiches across the U.S. in honor of the restaurant chain’s "most significant menu update in its nearly 60-year history."

Those who visit participating Subway locations between 10 a.m. and 12 p.m. local time on July 12 can get a free 6-inch sandwich from the chain’s new "Subway Series" menu. The updated menu, which launched on Tuesday, features 12 new signature sub that can be ordered by name or number — instead of its traditional customization.

The rebrand is part of Subway’s "transformation journey" that began last summer following declining U.S. sales and media coverage in the past over claims about its tuna sandwich. In July 2021, the Connecticut-based company added more than 20 new or refreshed ingredients to the Subway menu and also did a similar sub sandwich giveaway.

Instead of picking ingredients and toppings throughout the ordering process, customers can now say a sandwich number or name and 6-inch or footlong. The new Subway Series menu includes meat, cheese, vegetables, sauce and freshly-baked bread and is divided into four categories:

Subway restaurants, which grew to popularity with their $5 footlongs, among other advertisements, are franchised. Today there are more than 37,000 Subway restaurants in over 100 countries, ranking among the largest fast-food restaurant chains in the world.

Rideshare driver travels to all 50 states to try local food, learn about America

Kreskin Torres, a 33-year-old Army veteran, kicked off his adventure in Los Angeles, California, and since then, he has visited 49 states. Soon, he will fly to Honolulu, Hawaii, and rent a car to achieve his 50-state milestone.

In early 2021, Subway received not-so-favorable media attention after two California residents sued the restaurant chain alleging that its tuna was "anything but tuna" and calling it "tuna salad" constituted fraud and false advertising. Subway responded, saying in part that the accusation was "reckless and improper."

"The taste and quality of our tuna make it one of Subway’s most popular products and these baseless accusations threaten to damage our franchisees, small business owners who work tirelessly to uphold the high standards that Subway sets for all of its products, including its tuna," the company said at the time.

A federal court judge later dismissed the customers’ lawsuit in October but allowed the plaintiffs to resubmit an amended complaint. For its part, Subway now has a whole tuna sandwich section on its website "to set forth the facts and help clarify any misunderstandings."