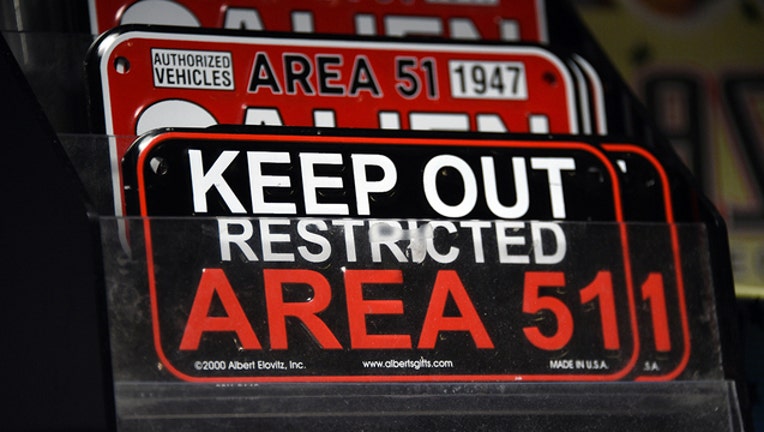 Alien and Area 51 themed gifts are displayed for sale at the Little A'le'Inn restaurant and gift shop in Rachel, Nevada. (Photo by David Becker/Getty Images)

FOX NEWS - When the masses possibly descend on the rural Nevada landscape later this month for the viral "Storm Area 51" event and related festivals that have popped up after its creation, don't expect to set out for the full alien experience with Will Tryon's tour company.

Area 51 is popularly known as the site of rumored government studies of outer space aliens. The "Storm Area 51" Facebook event went viral in July as people pledged to crash the secret military base in an attempt to "see them aliens." More than 3 million Facebook users have now said they are going, with over 1.4 million replying they were interested.

After going viral, the event — which started as a joke — spurred two rural Nevada counties to draft emergency declarations, with local law enforcement planning to team resources with the state and neighboring counties ahead of the Sept. 20-22 events.

Tryon, the owner of Las Vegas Adventure Tours and operator of GetYourGuide's Area 51 tour, told Fox News on Monday that his company won't be taking customers out into the area from Sept. 19 to 22 out of concerns that things could "get difficult," including the possibility that the few gas stations in the area may run out of fuel.

"We have to think first of the safety of their customers," he said. "I don't think putting a customer in that kind of situation is a safe choice."

One of the alien-related festivals is scheduled to take place in the town of Rachel, located about 148 miles north of Las Vegas. The town's official website warns there is no gas or store in the town of 54 people, with the nearest gas station either 50 miles south in Ash Springs or 110 miles north in Tonopah.

Tryon, who has been running the Area 51 tour for over 18 years, told Fox News he wasn't surprised the Facebook event went viral because people across the country want to know what's happening at the top-secret military base.

"It's simply a rebound of the American desire to know," he said Monday. "Although storming Area 51, I think, isn't a good idea. They take that whole place seriously."

He stressed, however, that those staying in Las Vegas can't get back and forth on one tank of fuel if they plan on attempting to make a trek on their own, especially if there is traffic or any other incident on the few roadways in the region.

"Getting caught in the desert isn't a good thing, " he told Fox News. "You can dehydrate and end up with serious issues."

That's why he recommends people make sure they go through a certified tour operator, especially avoiding the weekend of scheduled events. In his company's full-day tours, travelers head out along the infamous "Extraterrestrial Highway" and showcase the scenic desert complete with stops at the Little A'le'Inn, 6-foot Indian petroglyphs that resemble aliens, and get the chance to stand at the perimeter of the military base without fear of arrest.

"For the enthusiasts, it's a pilgrimage," Tryon told Fox News. "It has such mystique about it."

Tryon, who hosts tours for visitors from all over the world, said the viral Facebook event has caused "a nice uptick" in interest for tours in the area.

Lauren Hillhouse, GetYourGuide's destination manager for Arizona and Nevada, told Fox News on Monday that the area typically sees interest from travelers in the U.S., but the European-based tour company has seen searches spike from people in places such as South America, Germany, Spain, and Italy. Traffic to its Area 51 activities page soared to 20 times normal levels in the past month, according to GetYourGuide.

"I think they're looking for attractions, but what they are finding are tours," she said Monday.

Hillhouse said that Area 51 tours were not even on her top points of interest until the Facebook event "exploded." She said that, aside from avoiding the rural area between Sept. 19 to 22, anyone who is interested in visiting the Area 51 region should make sure to sign up for a legitimate tour and legitimate experience.

"Go through a verified source, do your research and be prepared for it," she told Fox News.

Tryon, who "fell in love" with the Southwest about 27 years ago, said he plans to be out next weekend on his own with a film crew — and extra gas — to keep tabs on whatever happens.

He's also convinced the military has had a space ship and even aliens there, citing information about the crash of an unidentified object in Roswell, N.M., on July 8, 1947. Government officials have labeled the crashed object a weather balloon.

"Are we alone in the universe? Of course, we're not," he told Fox News.

He also said information from earlier this year, about U.S. Navy pilots reporting having spotted UFOs while training over the East Coast in 2014 and 2015, just adds to the intrigue that people have for the secret site.