State and local officials nationwide are imposing new coronavirus restrictions and pleading with the public in an increasingly desperate attempt to stop the explosive spread of the disease as many Americans resist calls to limit gatherings and travel heading into the holidays.

Nevada Gov. Steve Sisolak tightened restrictions on casinos, restaurants and private gatherings beginning Tuesday. In California, where most counties are under a curfew, Los Angeles County officials will prohibit in-person dining for at least three weeks, and a judge on Monday denied a request to temporarily restore indoor service at restaurants and gyms in San Diego County. Nebraska Gov. Pete Ricketts warned that he could impose tighter social-distancing restrictions before Thanksgiving if hospitalizations continue to rise.

Sisolak, who has avoided tightening mandates throughout the fall because of the potential damage to Nevada’s tourism-based economy, said the trends led to an “inescapable conclusion.”

“We are on a rapid trajectory that threatens to overwhelm our health care system, our front-line health workers and your access to care. So it’s time to act,” said Sisolak, who recently contracted COVID-19.

Around 83,000 people in the U.S. are hospitalized with COVID-19, according to the Covid Tracking Project. Infections have led to a shortage of hospital beds and health care workers, and they threaten non-COVID-19-related surgeries and other care.

Colorado Gov. Jared Polis on Monday issued an executive order authorizing the state health department to order hospitals and emergency departments to transfer non-virus patients and to cease admitting new ones to deal with the influx of coronavirus cases.

In Washington state, elective procedures such as joint and heart valve replacements and some cancer surgeries could be postponed to make room for coronavirus patients, said Washington State Hospital Association CEO Cassie Sauer.

Adding to the stress: Some of the new restrictions are throwing people out of work again.

Economists worry that companies laying off workers will reverse the solid job gains since the spring and even push up the unemployment rate again. In a troublesome sign, the number of Americans seeking unemployment aid rose last week for the first time in five weeks.

About 20 million Americans are now receiving some form of unemployment benefits, but about half will lose those benefits when two federal programs expire at the end of the year.

But the message from President-elect Joe Biden to local health officials is that the best way to get the economy back on track is to get the virus under control until a vaccine is widely available.

Despite pleas from the Centers for Disease Control and Prevention to skip Thanksgiving travel and not spend the holiday with people from outside their household, about 1 million people a day packed airports and planes over the weekend. The crowds are expected to grow.

Even so, health officials are trying everything they can to slow the spread and address an even worse surge that many say is inevitable.

In North Dakota — which ranks first in the country in new COVID-19 cases per capita and where the governor only recently began requiring masks in public — health officials are rolling out free rapid COVID-19 testing for teachers, staff and school administrators. The pilot project is designed to slow the virus’ spread by identifying and quickly isolating people who may be asymptomatic.

Massachusetts is launching television and digital ads in several languages to encourage residents to wear masks, keep their distance from others and get tested, Gov. Charlie Baker said. The Oklahoma City Council planned to vote Tuesday on whether to extend a mask mandate.

New York Gov. Andrew Cuomo said he is reopening an emergency COVID-19 field hospital on Staten Island, the first such facility in the state to relaunch since the state partly tamed the pandemic over the summer. New York state has averaged nearly 5,500 new cases per day over the past seven days.

The temporary hospital cared for 200 patients last spring, when New York City’s hospital wards were overwhelmed with seriously ill and dying patients. Now, Cuomo said, officials are concerned it might be needed again, as the virus has spread in the borough at a faster rate than in the rest of the city. Staten Island has averaged 209 new cases of COVID-19 per day over the past seven days — up 86% from two weeks ago. 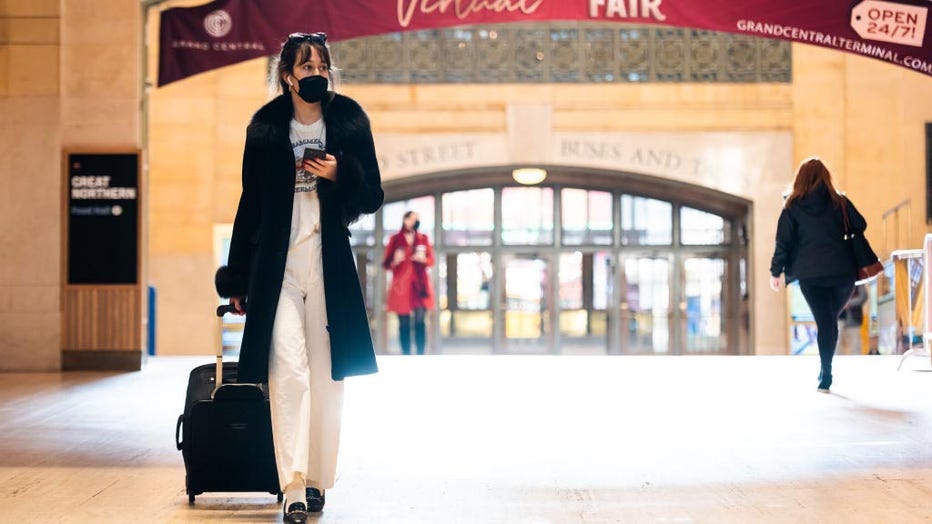 A person walks with luggage in Grand Central Terminal on Nov. 23, 2020 in New York City. (Photo by Noam Galai/Getty Images)

Some governors appeared reluctant to get too strict.

North Carolina Gov. Roy Cooper issued an executive order on Monday that mandates increased mask-wearing, but he did not tighten occupancy limits on businesses. The Democrat is holding out hope that increased compliance with existing health guidelines will stabilize the worsening trends in his state.

In Utah, Republican Gov. Gary Herbert relaxed restrictions on social gatherings ahead of Thanksgiving weekend. He said people still must wear masks, but he will not extend his previous two-week order that required people to limit social gatherings to people in their immediate household.

Still, he recommended smaller gatherings for the holiday.

“You increase the risk when you bring people into your home,” he said during a press briefing. “That’s just the harsh reality.”