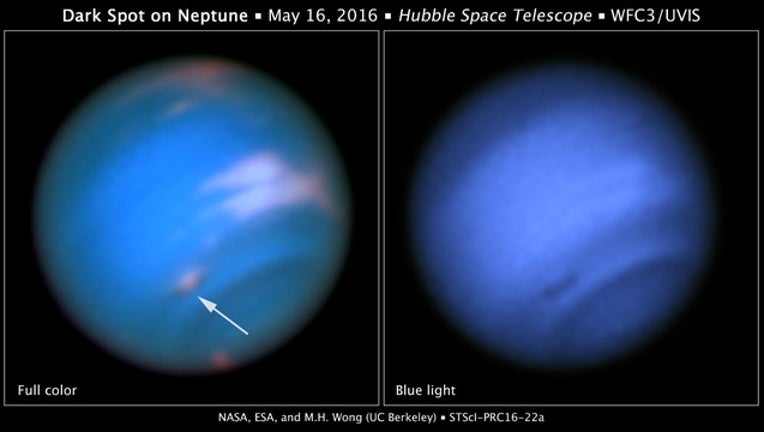 Pancake-shaped clouds not only appear in the children's book "Cloudy With a Chance of Meatballs," but also 3 billion miles away on the gaseous planet Neptune. Image from Hubble website.

LOS ANGELES, CA (FOX 11) - There is renewed interest in our eighth planet Neptune, as new images coming from the Hubble Telescope show a dark vortex in its atmosphere. The dark vortex is "like huge, lens-shaped gaseous mountains," University of California research astronomer Mike Wong said in a statement. Seen for the second year in a row, the spot is estimated to be about 3,000 miles wide.  The images were obtained May 16, 2016, and the discovery was announced the day after.  The Hubble announced this news on Thursday in a statement online.

Similar features were seen when Voyager 2 flew by the planet in 1994. The Hubble Telescope also witnessed this dark spot in 1994, but the vortex is the first one observed on Neptune in the 21st century.

Planetary astronomers hope to better understand how these dark vortices originate, what controls their drifts and oscillations, how they interact with the environment, and how they eventually dissipate, according to UC Berkeley student Joshua Tollefson. Tollefson was recently awarded a prestigious fellowship to study Neptune's atmospheres, according to NASA.

Neptune is the farthest known planet from the Sun in our Solar System. It's the fourth-largest planet by diameter and the third-largest by mass. You can't see Neptune with the naked eye, but if you search with amateur astronomy equipment, you'll see a blue dot in the sky, similar to it's neighboring planet, Uranus.

Neptune was discovered by mathematical prediction rather than observation back in 1846 by Johann Galle within a degree of the position predicted by Urbain Le Verrier. It's largest moon, Triton, was discovered shortly thereafter, but the remaining 14 moons were located by telescope much later in the 20th century.