Authorities say a SEPTA police officer was shot while providing covering fire for another officer who was pinned down by a barricaded gunman Wednesday night in Frankford. The officer was rushed to Temple University Hospital where he underwent emergency surgery and is in stable condition.

PHILADELPHIA - A suspect is dead and three people, including a SEPTA Transit Police officer, are in stable condition after a shootout in Philadelphia’s Frankford neighborhood Wednesday night.

Philadelphia police say officers who were in the area of the Arrott Transportation Center when they heard gunshots around 7 p.m.

The officers responded to Griscom and Arrott streets where they found two women, ages 57 and 42, with gunshot wounds to the hip area.

Police then spotted a suspect, who was armed, and chased him to a property on the 4700 block of Leiper Street. Once inside the residence, police say he barricaded himself in and began firing at police from different floors of the building. 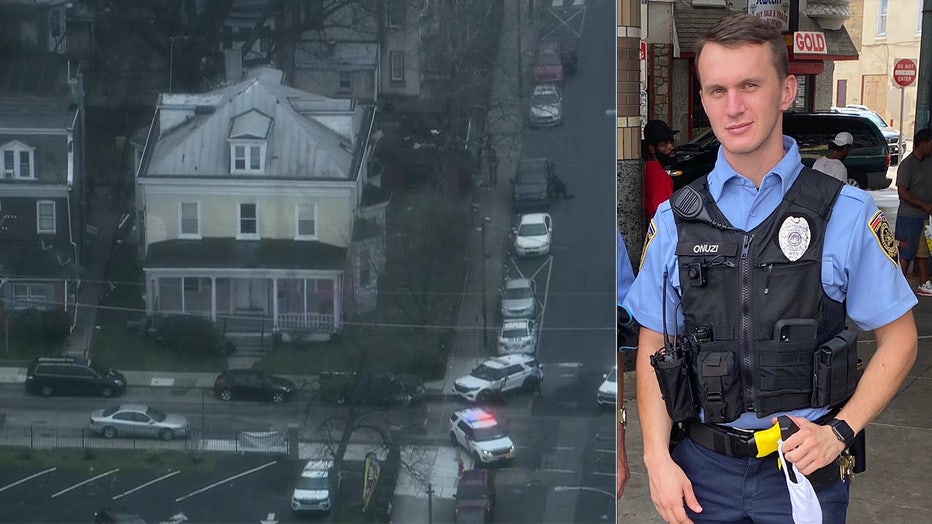 Ervis Onuzi, 28, has been identified as the SEPTA Transit Police officer who was wounded during a gun battle with a suspect on Wednesday.

A gunfight ensued with multiple police officers returning fire toward the windows of the home.

During the gunfight, SEPTA Police Chief Thomas Nestel says a Philadelphia police officer became pinned down by gunfire coming from the residence. Nestel says that a SEPTA officer, later identified as 28-year-old Ervis Onuzi, drew his assault weapon and charged the gunman in order to provide covering fire to the trapped officer.

That’s when authorities say the Officer Onuzi was shot once in the abdomen. Onuzi, a three-year-veteran of the force, was rushed to Temple University Hospital where he underwent emergency surgery.

The officer and both women who were injured are expected to be okay.

A crowd of police officers gathered outside of Temple University Hospital where a SEPTA police officer who was injured in a shootout with a barricaded suspect was brought. The officer, 28, was placed in stable condition after undergoing emergency surgery.

A massive law enforcement presence converged on the house, including Philadelphia police and SWAT officers. Philadelphia police say they used technology to determine that the suspect was down near a second floor window. SWAT team members entered the property and found the suspect dead of an apparent self-inflicted gunshot wound to the head.

"Here we are again on another night in our city and just this completely and totally unacceptable and reckless gun violence," Philadelphia Police Sgt. Eric Gripp said. "Nearly took three innocent people's lives, and we're so grateful that it wasn't worse than it was."

Police have not yet identified the suspect, but sources tell FOX 29's Steve Keeley that the suspect is believed to have been 18-years old.