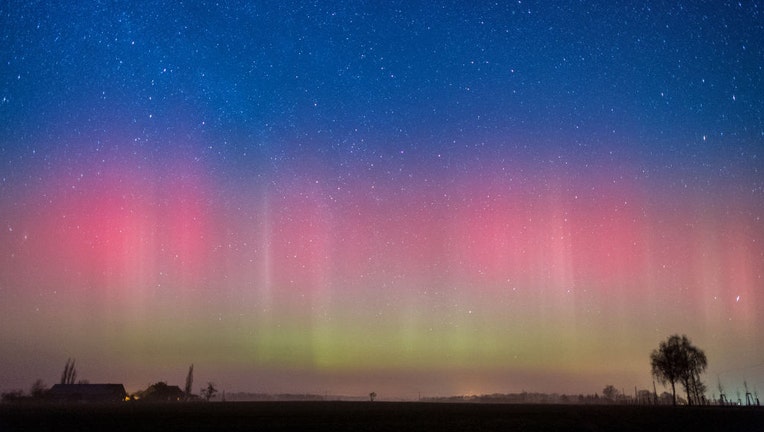 BOULDER, Colo. - NOAA's Space Weather Prediction Center has issued a Geomagnetic Storm Watch and predicts the storm could reach level 3 on their 5-level scale when the flares arrive around Wednesday evening.

Earth's magnetic field shields us from any human health impacts, but while the storm may cause a few issues with satellite and radio signals, the most visible effect would be a colorful show of the aurora that could be visible at latitudes farther south than usual.

The SWPC suggests auroras could be visible from Pennsylvania to Iowa to Oregon.

Solar activity has been increasing over the last several months as the sun emerges from the lull in its 11-year-solar cycle and begins its trek toward the peak of the current cycle, expected in 2024. Multiple sunspots are now visible on the sun's surface and one of them unleashed a pair of larger solar flares about 8.5 hours apart on Monday.

The first solar flare was at around 10 a.m. ET and was quickly overtaken by the larger flare later that afternoon. The energy was forecast to reach Earth's magnetic field around Wednesday evening.

Forecasters say these level 3 conditions may be observed on average about 130 days per 11-year solar cycle.

Will the weather cooperate?

Unfortunately, the weather forecast is cloudy Wednesday night for much of the upper Midwest and Great Lakes region. Skies over Northern Lights-favorite areas of Minnesota, Wisconsin and northern Michigan are looking rather gray.

The Northeast is also looking mostly cloudy but may see a few breaks in the overcast:

Prospects are better across the northern Rockies into the Dakotas and it's hit-and-miss in the Pacific Northwest as weak front blows through Washington and Oregon in the afternoon and evening.

Light pollution from nearby urban areas will make it difficult to spot the aurora.

"When (the aurora) are fairly dim, it's harder for your eyes to see the colors and distinguish between city lights," says Don Hampton, a researcher at the University of Alaska, Fairbanks. "You want to be out of town a couple of miles. If you can be in a farm field or something, look off to the north with fewer lights."

You'll also want to make sure the sun is well below the horizon -- think 11 p.m. to 3 a.m. local time -- so the skies are as dark as they can be, and hope a bright moon isn't around to blast the sky with competing for light.