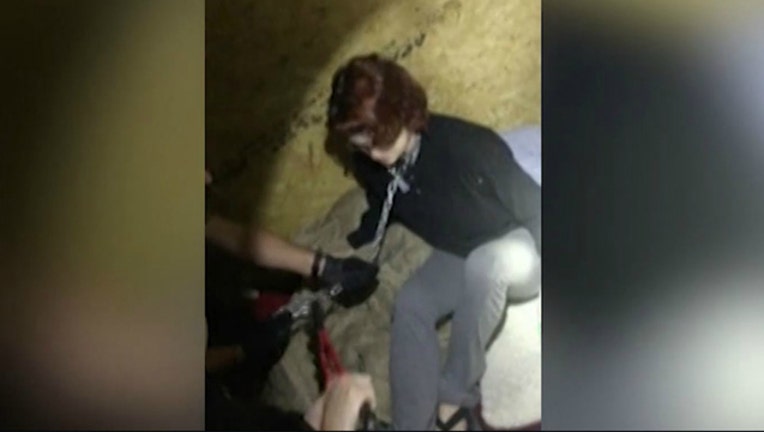 COLUMBIA, S.C. (AP) -- After hearing a woman's screams inside a large metal container, investigators sawed and pried open the bin, rescuing the woman who had been chained inside for about two months by a serial killer, according to new videos released by prosecutors.

The videos also show Todd Kohlhepp, in cold and emotionless detail, confessing to killing seven people in South Carolina. He pleaded guilty two weeks ago to avoid the death penalty and was sentenced to life in prison. On Friday, prosecutors released several videos, dozens of pictures and hundreds of pages of evidence against him.

In the rescue video, once the container was opened after the 10-minute operation, officers walked in carefully with their hands on their guns and found a clothed Kala Brown, sitting on the floor with a chain around her neck stretching to the wall.

"Do you know where your buddy is?" an officer said.

"Charlie? He shot him," she said quietly.

"Todd Kohlhepp shot Charlie Carver three times in the chest, wrapped him in a blue tarp, put him in the bucket of the tractor, locked me down here. I've never seen him again. He says he's dead and buried. He says there are several bodies dead and buried out here," she said.

Investigators found three bodies on the rural Spartanburg County property. They had gone to the land on Nov. 3 to look for Brown and her boyfriend, 32-year-old Charles Carver. The couple had been missing for two months, and Brown's cellphone indicated she might have been in the area when she vanished.

Authorities say on the way to the hospital, Brown told them about how Kohlhepp confessed to killing a married couple before she was captured, and about killing four people at a Spartanburg County motorcycle shop -- murders that were unsolved for 13 years.

After authorities let Kohlhepp talk to his mother and promised to give her money from his accounts, he confessed in several other videos released by prosecutors.

Kohlhepp bragged in one video about wearing gloves when loading his gun to assure no fingerprints were on the casings. He also told authorities he pulled the gun apart and threw the components into different trash bins, putting the barrel into a bag of used kitty litter.

Even though it had been 13 years, Kohlhepp detailed each shot he fired at the Superbike shop, including final shots to the forehead of 30-year-old Scott Ponder; 52-year-old Beverly Guy; 30-year-old Brian Lucas; and 26-year-old Chris Sherbert.

"That was one big building. I cleared that building in under 30 seconds," Kohlhepp said. "I'm sorry, but you guys would have been proud."

The investigators asked if anyone begged for their lives or said anything to him.

"I don't remember any of that. I will tell you that once I engaged, I was engaged. It was almost like a video game. It's not a game -- you've been there, sir, you know what I am talking about," Kohlhepp said.

Kohlhepp also killed 29-year-old Johnny Coxie and 26-year-old Leigh McCraw-Coxie in December 2015. They, like Carver and Brown, were lured to Kohlhepp's land after he promised them work.

Kohlhepp killed Coxie immediately and tried to keep McCraw-Coxie locked away, but he said he killed her after several days because she tried to burn the container after he gave her cigarettes.

"She wanted Little Caesar's pizza. I hate that (expletive). It gives me heartburn," Kohlhepp said. "Dr. Pepper, cinnamon rolls and freaking Newports. If you go down to that building, you'll find an unused package of Newports that I bought for her."

Kohlhepp denied killing anyone else. He did say he shot a man in Arizona when he was 14, but could give few details. Authorities have not charged him with any additional crimes in other states.

Kohlhepp moved to South Carolina in 2001 after 14 years in prison for a kidnapping in Arizona. Authorities there said the then 15-year-old Kohlhepp forced a 14-year-old neighbor back to his home at gunpoint, tied her up and raped her.