A Marion County K-9 is doing fine after a felony suspect he was chasing choked the dog during the pursuit.

MARION COUNTY, Fla. - A Marion County Sheriff's K-9 is doing fine after being choked by a burglary suspect the dog was chasing, deputies say.

The Sheriff's Office posted video of the pursuit to Facebook. They say 30-year-old James Rutledge Jr. was wanted after smashing the window of a car parked at a daycare, stealing a purse inside, and using the stolen bank cards at a nearby Walmart.

The Ocala Police Department located Rutledge and attempted to make a traffic stop from which they say Rutledge fled. Rutledge reportedly crashed his vehicle and ran on foot.

In the video, Rutledge is seen holding Adelmo's neck down to the ground, trying to choke him, the Sheriff's Office says.

"Let go of my dog!" the deputy yells. 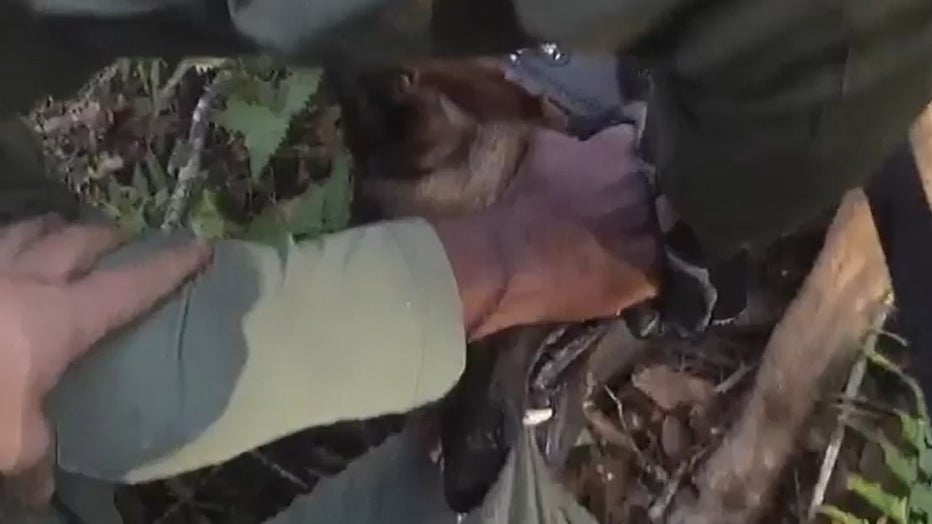 "Peterson had to utilize his taser in order to get Rutledge to release Adelmo’s neck."

While deputies put handcuffs on Rutledge, Adelmo bites into the suspect who continues to scream.

RELATED: Officer moved to tears after being gifted with stuffed animal resembling his late K-9 partner

"You shouldn't have fought him like that," a deputy says.

Rutledge was arrested and transported to the Marion County Jail. The Sheriff's Office says that K-9 Adelmo is doing fine after the attack.