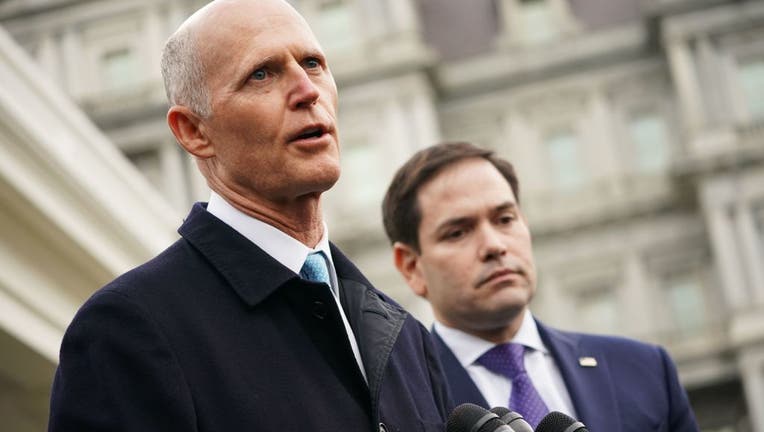 US senators Marco Rubio (L) and Rick Scott speak to reporters after a meeting with US President Donald Trump on Venezuela, outside of the West Wing of the White House in Washington, DC on January 22, 2019. (Photo by MANDEL NGAN / AFP) (Photo credit s

TALLAHASSEE, Fla. - Amid increasing pressure from outgoing President Donald Trump, Florida Republican U.S. Sens. Marco Rubio and Rick Scott are staying tight-lipped on how they will vote Wednesday when Congress is set to certify the results of the 2020 presidential election.

Presidential electors throughout the country certified their state election results in December, all but dissolving Republicans’ hopes that Trump still had a path to the 270 electoral votes required for him to win a second term.

Florida’s electors met on Dec. 14, delivering the state’s 29 votes to Trump in a largely ceremonial meeting that went off smoothly.

Both Rubio and Scott have presidential aspirations, according to many analysts, and their vote Wednesday could be part of the calculations for their political futures.

Eleven Republican senators have said that they will not be voting during Wednesday's congressional tally of Electoral College votes.

Florida Atlantic University political science professor Kevin Wagner told The News Service of Florida Tuesday that, while the political impact of objecting to the certification is uncertain, any potential objection won’t change the results of the election.

"Ultimately there’s not a lot at stake, procedurally. Which is to say, in order for an objection to be sustained, you would need a vote of both the House and the Senate," which Wagner says is improbable, particularly in the Senate. "Procedurally, objecting at this point just delays the process, because they will just have to debate the objections."

Still, the Florida GOP senators face political pressure to side with Trump and his loyalists, particularly in a state where Republicans made great gains in the 2020 election. Trump won the state by about 375,000 votes or three percentage points, a margin of victory considered a landslide by Sunshine State standards.

"If you put the political lens on it, there’s a reason why Leader McConnell did not want the objection because it forces senators to go on the record in a way that has political implications," Wagner said.

But a small group of Republican senators has committed to voting against certification of the election results, with Texas Sen. Ted Cruz --- another potential 2024 presidential candidate --- leading the charge.

The fall-out of a vote in support of Biden's election poses a "no-win situation" for Scott and Rubio, according to Wagner.

"The most active and vocal part of the Republican Party are President Trump supporters," Wagner said.

If the Florida senators do not support Trump’s effort to overturn the November election results, they "risk the possibility that a significant portion of the Republican party will not support (them), and that’s a big deal, especially in primaries," Wagner said.

"But if you do vote in support of the president, you might alienate a good number of more moderate Republican voters ... and at some point, you may need those voters," he added.

Rubio, who ran against Trump for president in 2016 and will be up for reelection in 2022, has declined to comment on how he intends to vote on Wednesday.

Scott, who will be on the 2024 ballot if seeks reelection, has also remained mum.

"Senator Scott is reviewing his options and will announce his decision at the appropriate time," Scott’s office said in a statement this week.

As potential presidential candidates weigh their options, it remains unknown whether Trump’s popularity among Republican voters will endure.

"To what extent are supporters of the president going to be as an important part of the Republican party as they are right now? Do they become more active? Or do they fade a bit," Wagner said. "For politicians looking at this, with political aspirations, it’s kind of a question of where the Republican Party will be in two years --- and no one knows."

Trump continues to assert that he won the presidential election and that the results were "rigged" or fraudulent, a belief that many of his allies endorse.

Protestors marched to Rubio’s home in Miami over the weekend, demanding he challenge the election results.

At least two Florida GOP congressmen, Rep. Brian Mast of Palm City and Rep. Matt Gaetz of Fort Walton Beach, have been vocal about planning to object to the certification of results.

"Will you vote to uphold democracy and certify the general election results tomorrow January 6th or will you stand on the side of autocracy and conspiracy theories?" the party said in a press release. "We know that many of your Republican colleagues, including members of the Florida delegation, have already said that they will be putting a Trump autocracy over country, but Floridians deserve to know if you will be supporting American democracy, or be voting in favor of autocracy."