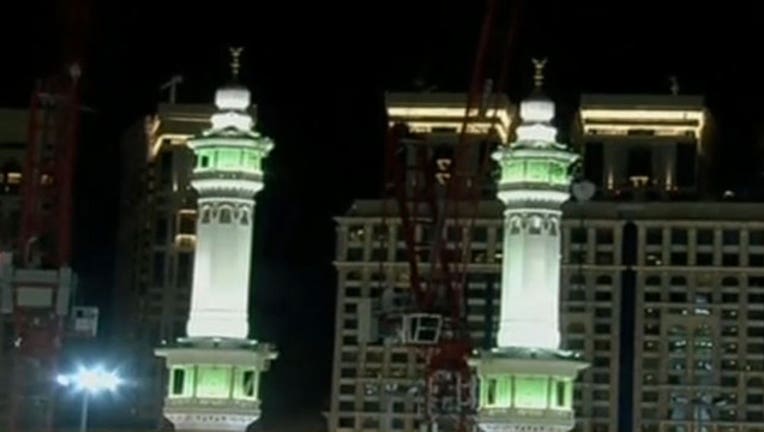 RIYADH, Saudi Arabia (AP) - A towering construction crane collapsed on Friday during a violent rainstorm in Saudi Arabia's city of Mecca, Islam's holiest site, crashing into the Grand Mosque and killing at least 87 people ahead of the start of the annual hajj pilgrimage later this month.

Videos and photos posted by social media users showed a grisly scene, with police and onlookers attending to bloodied bodies on the polished mosque floors.

Saudi Arabia's civil defense authority provided a series of rising casualty numbers on its official Twitter account. As of late Friday, it said those injured in the disaster numbered 184.

A photo posted online by the authority showed police and workers in hardhats inspecting a pile of collapsed concrete slabs inside a part of the sprawling, ornately decorated mosque.

Authorities did not provide details on the victims' nationalities, but it was likely that the tragedy will touch several countries.

The Grand Mosque and the cube-shaped Kaaba within it draw Muslims of all types from around the world throughout the year, though numbers increase significantly in the run-up to the hajj.

Performing the pilgrimage once during one's lifetime is a duty for all able-bodied adult Muslims.

Pan-satellite Al-Jazeera Television broadcast footage from inside the mosque compound said to be from the aftermath of the accident, showing the floor strewn with rubble and what appear to be pools of blood.

Another video, on a Twitter posting, captured the apparent moment of the crane's collapse during a heavy rainstorm, with a loud boom, screams and confusion.

Other Saudi officials could not immediately be reached or referred queries to the civil defense statements.

Several cranes surround the mosque to support an ongoing expansion and other construction work that has transformed the area around the sanctuary.

Steep hills and low-rise traditional buildings that once surrounded the mosque have in recent years given way to shopping malls and luxury hotels — among them the world's third-tallest building, a giant clock tower that is the centerpiece of the Abraj al-Bait complex.

The Binladin family has been close to the ruling Al Saud family for decades and oversees major building projects around the country. The Binladen family disowned one of its many members, late al-Qaida leader Osama bin Laden, in the 1990s.

It was not immediately clear who owned the crane that collapsed or whether it was involved in the expansion of the mosque or another project nearby.