LiveNOW from FOX has a conversation with a criminologist on the Alec Baldwin movie set shooting that took the life of one.

The armorer on the set of "Rust" offered a chilling theory through her attorneys about what led to the accidental shooting death of Halyna Hutchins.

Armorer Hannah Gutierrez Reed was one of four people who handled the weapon prior to Alec Baldwin firing it while rehearsing a scene for the indie-western. As a result, Santa Fe County Sheriff Adan Mendoza said that the investigation is largely focused on her as well as how a live round made its way to the set of the film at all.

Speaking on the "Today" show Wednesday, Jason Bowles and Robert Gorence claimed that the bullets their client loaded into the gun on the day of the shooting were taken from a box that was only supposed to contain dummy rounds that were incapable of firing. However, because the ammunition was left unattended from roughly 11 a.m. to 1 p.m. that day, they believe the opportunity was there for a disgruntled crew member to mix a live round into the box. 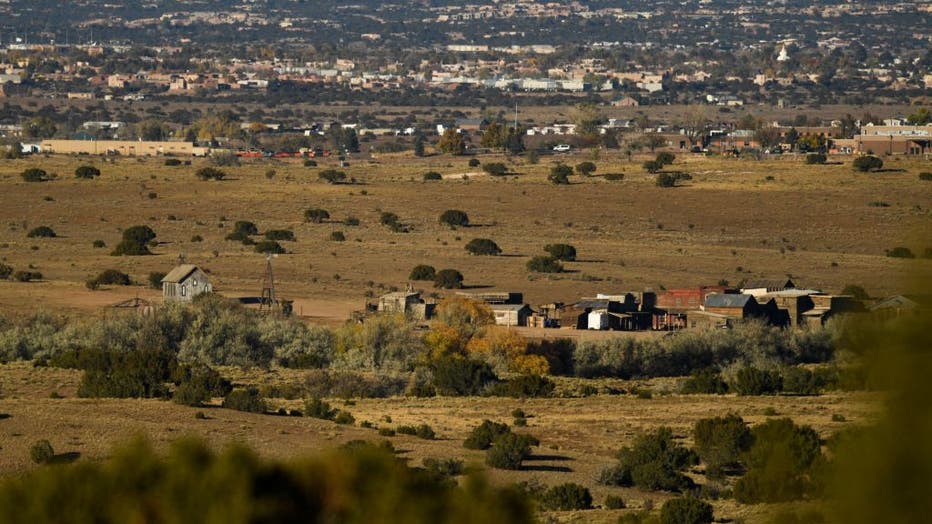 Buildings at the Bonanza Creek Ranch film set, near where a crew member was fatally shot during production of the western film "Rust", are seen on Oct. 28, 2021 in Santa Fe, New Mexico. (Photo by PATRICK T. FALLON/AFP via Getty Images)

The attorneys stopped short of making any kind of legitimate allegation against anyone, calling the idea of intentional sabotage just one of many working theories that they are investigating.

The attorneys took things a step further and noted that there was a two-hour time span in which potential sabotage could have taken place.

"We know a couple of facts. We know there was a live round in a box of dummy rounds that shouldn’t have been there. At least one round. We have people who walked off set because they were disgruntled. We have a timeline of approximately 11 a.m. to 1 p.m. that day in which the firearms at that time were unattended," Bowles said. "So there was opportunity to tamper with this scene and yes, we’re looking at that possibility."

According to a search warrant executed by the Sante Fe County Sheriff’s Department, the firearm was taken to a secure safe inside a prop truck when the crew broke for lunch. However, the ammunition was left unattended on the set and there was also ammunition inside the prop truck. None of that ammunition was supposed to be live, though. As a result, Gutierrez Reed’s attorneys believe that it’s possible someone who had an issue with the production could have stepped in and intentionally sabotaged the set with live rounds.

Police and prosecutors investigating the fatal shooting on the "Rust" film set involving actor Alec Baldwin held a press conference in Santa Fe, New Mexico, and released new details in the case. Authorities have recovered the gun and live round that killed cinematographer Halyna Hutchins and said all the crew members involved are cooperating. As of now there have been no charges filed against anyone in connection with the shooting.

The discussion over "disgruntled" crew members is likely a reference to the fact that the morning of the shooting, several of the camera crew walked off the job after days of arguing with the production company over lodging accommodations and working hours. The Los Angeles Times previously reported that Hutchins was involved in the disputes and did her best to resolve them before camera operators ultimately had enough and collected their personal equipment the morning of the shooting.

On Tuesday evening, Baldwin shared a lengthy statement from Terese Davis, who worked in the costume department, in which she claimed that allegations of poor working conditions on the set were either untrue or exaggerated.

Alec Baldwin spoke to photographers in Vermont where he said he is cooperating with police and has been speaking to them every day. Baldwin maintained that he could not speak on the active investigation. (Credit: FOX News Digital)

Gutierrez Reed previously said in an affidavit that there should have been no live rounds on the set. In a statement previously provided to Fox News, Bowles and Gorence reiterated those claims.

"Safety is Hannah’s number one priority on set," her attorneys said in the statement. "Ultimately this set would never have been compromised if live ammo were not introduced. Hannah has no idea where the live rounds came from."

However, because multiple live rounds were taken as evidence from the scene, including the round that killed Hutchins and wounded director Joel Souza, Sheriff Mendoza previously said that was "not an accurate statement" from the armorer.