Many gathered in Washington D.C. on Sunday and held a rally in support of Ukraine, as Russia's war on the country entered its 11th day. U.S. Senator Portman (R-OH) delivered remarks about the ongoing invasion and what else needs to be done in Congress and the administration to better support Ukraine.

On Day 11 of Russia’s war on Ukraine, Russian troops battered encircled cities with missiles and a second attempt to evacuate civilians from Mariupol failed as the besieged port city was shelled.

The number of Ukrainians forced from their country increased to 1.5 million, and the Kremlin’s rhetoric grew, with Russian President Vladimir Putin warning that Ukrainian statehood is in jeopardy. He likened the West’s sanctions on Russia to "declaring war."

Here’s a look at key things to know about the conflict Sunday:

The plan agreed to with Russian forces had been to allow people fleeing the combat and shelling to leave along designated humanitarian "green corridors," but Gerashchenko said on Telegram that Russians had not respected the truce.

A day earlier, Ukrainian officials similarly said Russian artillery fire and airstrikes had prevented residents from leaving before the agreed-to evacuations got underway in Mariupol and the nearby city of Volnovakha. Then, Putin accused Ukraine of sabotaging the effort.

Russia has sought to cut off Ukraine’s access to the Sea of Azov in the south. Capturing Mariupol could allow Russia to establish a land corridor to Crimea, which it annexed in 2014.

Oleksiy Arestovich, an adviser to President Volodymyr Zelenskyy, said Ukrainian officials and international humanitarian organizations were working with Russia through intermediaries to establish humanitarian corridors from the hard-hit Kyiv suburbs of Bucha and Hostomel. 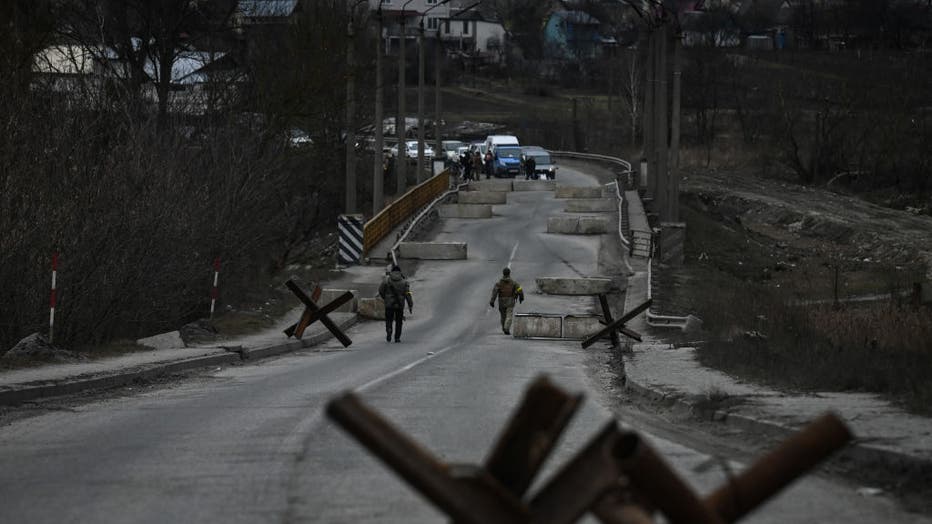 What else is happening on the ground?

Russian forces launched hundreds of missiles and artillery attacks across the country, including powerful bombs dropped on residential areas of Chernihiv, a city north of the capital of Kyiv, Ukrainian officials said. But a miles-long Russian armored column threatening the capital remained stalled outside Kyiv.

In the Kyiv suburbs of Bucha, Hostomel and Irpin, efforts to evacuate residents on Sunday were unsuccessful..

Zelenskyy said those who order and carry out such crimes should be brought to justice.

Russian Defense Ministry spokesman Igor Konashenkov said in a statement carried by the state news agency Tass that employees of those plants should not go to work.

Zelenskyy pushed his call for foreign countries to impose a no-fly zone over Ukraine. Establishing a no-fly zone would risk escalating the conflict by involving foreign militaries directly. Although the United States and many Western countries have backed Ukraine with weapons shipments, they have sent no troops.

Zelenskyy said in a video address on Sunday that "the world is strong enough to close our skies" and this weekend urged U.S. officials help his country obtain warplanes to fight the invasion and retain control of its airspace.

NATO countries have ruled out policing a no-fly zone, which would bar all unauthorized aircraft from flying over Ukraine.

Russian Defense Ministry spokesman Igor Konashenkov said Sunday that some Ukrainian combat planes had redeployed to Romania and other Ukraine neighbors he didn’t identify. He warned an attack from planes operating out of those nations could be deemed an engagement by them in the conflict.

Directly witnessed or confirmed by The Associated Press

Onlookers in Chernihiv cheered as they watched a Russian military plane fall from the sky and crash, according to video released by the Ukrainian government. In Kherson, hundreds of protesters waved blue and yellow Ukrainian flags and shouted, "Go home."

In Irpin, near Kyiv, a sea of people on foot and even in wheelbarrows trudged over the remains of a destroyed bridge to cross a river and leave the city. Assisted by Ukrainian soldiers, they lugged pets, infants, purses and flimsy bags stuffed with minimal possessions. Some of the weak and elderly were carried along the path in blankets and carts.

Kyiv’s central train station remained crowded with people desperate to leave, and frequent shelling could be heard from the center of the capital city.

Intense diplomatic efforts continued, with U.S. Secretary of State Antony Blinken in Moldova pledging America’s support to the small Western-leaning former Soviet republic. The country is coping with an influx of refugees from Ukraine and keeping an eye on Russia’s intensifying war with its neighbor.

Blinken says the United States and its allies are having a "very active discussion" about banning the import of Russian oil and natural gas.

In a call with Putin that lasted nearly two hours on Sunday, French President Emmanuel Macron repeated calls for Russia to halt military operations, protect civilians and allow humanitarian aid. A French official who spoke anonymously, in line with the French presidency’s practices, said Macron told Putin that nuclear facilities must not be targeted and that Putin said he does not intend to attack nuclear plants and agreed on the principle of "dialogue" on the issue.

The director general of the International Atomic Energy Agency, Rafael Mariano Grossi, said Sunday Ukrainian staff members at the Zaporizhzhya nuclear plant are now required to seek approval for any operation, even maintenance, from the Russians. He said Russians who seized what is Ukraine’s largest nuclear plant last week have impeded normal communications by switching off some mobile networks and internet at the site.

Putin continued to blame the war on the Ukrainian leadership and slammed their resistance to the invasion. He said if they continued to resist, "They are calling into question the future of Ukrainian statehood."

In a call with Turkish President Recep Tayyip Erdogan on Sunday, Putin said the invasion could be halted only "only if Kyiv ceases hostilities," according to a Kremlin statement on the phone call.

Israel’s prime minister spoke with Putin on Sunday, a day after they met directly in Russia. Naftali Bennett was in Moscow on Saturday to met with Putin, then spoke to Zelenskyy and on Sunday with German Chancellor Olaf Scholz.

Israel is one of the few countries that has good working relations with both Russia and Ukraine.

Also Sunday, Pope Francis said he had dispatched two cardinals to Ukraine — a highly unusual move — saying "the Holy See is willing to do everything to put itself in service for peace."

The death toll of the conflict has been difficult to measure. The U.N. human rights office said at least 364 civilians have been confirmed killed since the Feb. 24 invasion, but the true number is probably much higher.

The World Health Organization said it verified at least six attacks that have killed six health care workers and injured 11 others.

Attacks on health care workers are a violation of international humanitarian law, WHO Director-General Tedros Adhanom Ghebreyesus said on Twitter.

Ukrainian refugees continued to pour into neighboring countries, including Poland, Romania and Moldova. The number of people who have left since fighting began has now reached 1.5 million, according to U.N. refugee agency.

Two of the so-called Big Four accounting firms — KPMG and PricewaterhouseCoopers — said Sunday they were pulling out of Russia, ending relationships with member firms based in the country.

TikTok said users won’t be able to post new videos in Russia in response to the government’s crackdown on social media, and American Express announced it was suspending all operations in Russia and Belarus.

Netflix also announced it was suspending its service in Russia but did not provide additional details.