Russian forces expanded their offensive in Ukraine on Friday as they conducted airstrikes in new areas in the country's west, while Russian President Vladimir Putin approved the recruitment of "volunteers" from Syria and elsewhere to join the fight.

The West ramped up economic pressure on Russia, as the U.S. and its allies downgraded Russian's trade status — the latest in efforts to further isolate Russia for the invasion.

The war has forced more than 2.5 million people to flee Ukraine, while others seek refuge in basements, subway stations and underground shelters. More evacuations were expected, though repeated attempts to allow people to flee the besieged port city of Mariupol in the south have failed under continued Russian shelling.

Ukraine President Volodymyr Zelenskyy said via video from Kyiv: "It’s impossible to say how many days we will still need to free our land, but it is possible to say that we will do it." 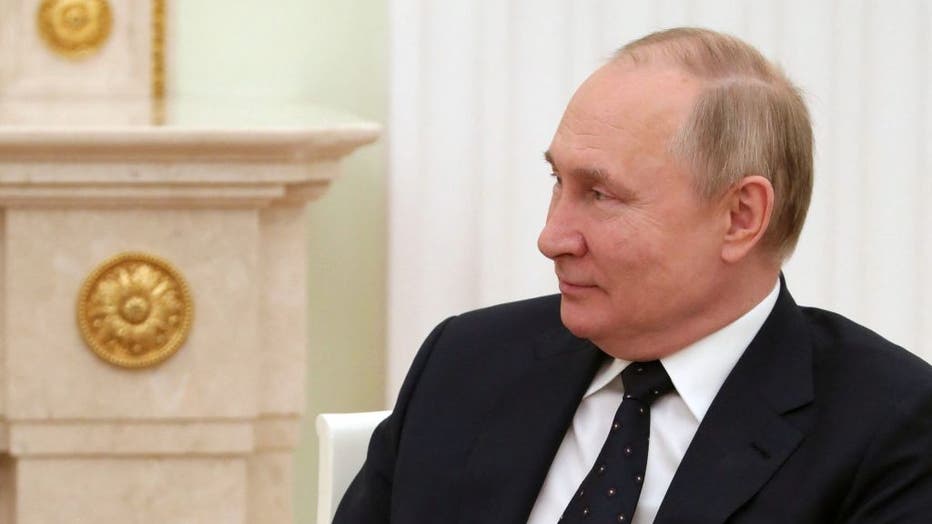 Russian President Vladimir Putin attends a meeting with his Belarus counterpart at the Kremlin in Moscow on March 11, 2022. (Photo by MIKHAIL KLIMENTYEV/SPUTNIK/AFP via Getty Images)

Here are some key things to know about the war:

What's happening on the ground?

New areas in western Ukraine came under attack Friday, as Ukrainian authorities said Russian airstrikes hit in the western cities of Ivano-Frankiivsk and Lutsk — far from Russia’s main targets elsewhere in the country.

Russia said it used high-precision long-range weapons to put military airfields in the two cities "out of action." Lutsk Mayor Ihor Polishchuk said four servicemen were killed and another six were wounded.

Russia’s Defense Ministry also said Friday that an offensive, led by fighters from the separatist-held Donetsk region, were further squeezing the southern port city of Mariupol. Ukrainian Deputy Prime Minister Iryna Vereshchuk said some 1,300 civilians have been killed in Mariupol throughout the siege, but it was not possible to independently verify the figure.

The Defence Intelligence of Ukraine has posted on Twitter that Russian President Vladimir Putin is "preparing a terrorist attack on the Chernobyl nuclear power plant." The department tweeted that a "man-made catastrophe" is planned at the plant and will be manipulated to appear as if Ukraine was responsible for the attack.

Satellite images show a huge Russian convoy that had been mired outside Kyiv has fanned out into towns and forests, but it wasn't immediately clear if that posed an immediate threat to the capital city.

Three more Russian airstrikes hit the industrial city of Dnipro in eastern Ukraine on Friday, killing at least one person, according to the Ukrainian interior ministry.

Thousands of civilians and soldiers on both sides are believed to have been killed in the invasion.

More shelling and airstrikes pummeled Mariupol on Friday, leaving apartment complexes on fire as temperatures hovered around freezing. The city of 430,000 has been without food, running water and electricity for 10 days. Residents know little of the military situation, but know it’s not safe to go outside.

A newborn girl nestled against her mother after Russian airstrikes hit the Mariupol maternity hospital where the woman was to give birth. Mariana Vishegirskaya had her baby, Veronika, via cesarean section in another hospital on the city's outskirts a day after the Wednesday attack at hospital shocked the world.

On the outskirts of Kyiv, AP reporters witnessed a teenage girl recovering at a hospital after her family was ambushed as they tried to flee.

In Baryshivka, a village east of Kyiv, people surveyed damage and boarded up windows after a Russian bombing reduced a restaurant and a cinema to hanging metal, dust, glass and other debris. Ivan Merzyk, a 62-year-old resident, said: "Putin created this mess, thinking he will be in charge here. Ukrainians are a free nation. We are not going away from here and we don’t want to see any Russian here."

Who are the ‘volunteer’ fighters in this war?

Putin approved bringing "volunteer" fighters from Syria and other countries to join Russia’s offensive. Russia's defense minister said there had been "more than 16,000 applications" from the Middle East. He said many were from people who fought alongside Russia against the Islamic State group.

Kremlin spokesman Dmitry Peskov confirmed the recruits include fighters from Syria, where Russia intervened in the civil war in 2015 on the side of President Bashar Assad.

Meanwhile, the Ukrainian government says about 20,000 foreigners have joined the so-called International Legion for the Territorial Defense of Ukraine to fight the Russians.

The pro-Ukrainian fighters are given weapons when they arrive. About 100 Americans are among the fighters. The U.K. has warned veterans not to travel to Ukraine to fight there, saying those who do will be court-martialed.

Are people being safely evacuated?

Ukrainian authorities said there are plans for several evacuation and humanitarian aid delivery routes. The top priority remains freeing people from the city of Mariupol and getting aid to its desperate population.

Buses were being sent Friday to multiple Kyiv suburbs to bring people to the capital, where authorities say half of the metropolitan area's population, or around 2 million, has already fled.

There were also efforts to create new humanitarian corridors around the cities of Kherson in the south, Chernihiv in the north and Kharkiv in the east. Russian forces were blockading Kharkiv and pushing their offensive in the south around three cities and towns, including the hometown of Ukraine’s president, Kryvyi Rih.

What about Russia's claims that bioweapons are being developed in Ukraine?

Russia requested a meeting of the U.N. Security Council to discuss its baseless claims that the U.S. was conducting "biological activities" in Ukraine — an allegation that has been denied by both Washington and Kyiv.

At Friday's meeting, the United States accused Russia of "lying and spreading disinformation" as part of a potential false-flag operation — a scenario that U.S. Secretary of State Antony Blinken warned last month could happen as Putin seeks to justify his violent attack on Ukraine. U.S. Ambassador Linda Thomas-Greenfield said Friday that the U.S. believes Russia could use chemical or biological agents.

The Pentagon said Friday it supports labs in Ukraine that are devoted to identifying and responding to biological threats. The labs are owned and operated by Ukraine. The work of the labs is not secret, and experts say they are not being used for bioweapons.

China, meanwhile, is amplifying the unsubstantiated and inflammatory claims.

What's the view from inside Russia?

Moscow is making more moves to restrict access to foreign social media platforms. On Friday, Russian's communications and media regulator said it's blocking access to Instagram because it’s being used to call for violence against Russian soldiers.

That comes after Facebook owner, Meta Platforms, which also owns Instagram, said it had "made allowances for forms of political expression that would normally violate our rules on violent speech, such as ‘death to the Russian invaders’." Meta's statement stressed it would not allow credible calls for violence against Russian civilians.

Meanwhile, YouTube started blocking global access to channels associated with Russian state-funded media, and said it is removing content about Russia’s invasion of Ukraine that violates its policy about minimizing or trivializing "well-documented violent events."

RELATED: Ukraine crisis: How you can help UNICEF, Project HOPE, and GlobalGiving

Are more sanctions against Russia happening?

U.S. President Joe Biden announced an agreement Friday with other nations to revoke Russia’s "most favored nation" trade status, which would allow for higher tariffs to be imposed on Russian imports.

Western nations have been largely united in punishing Russia economically.