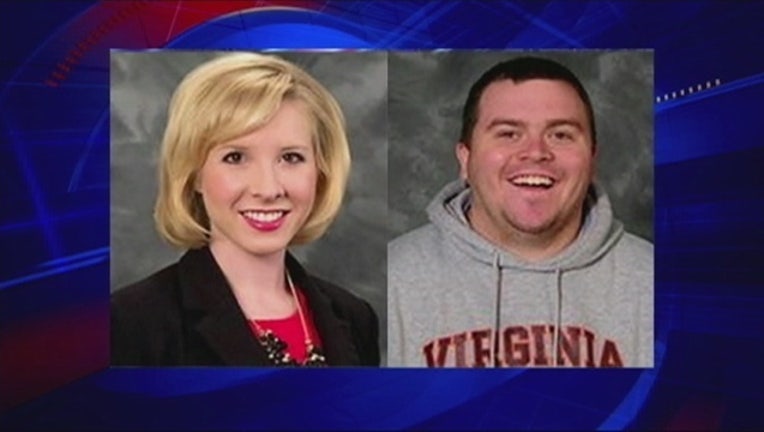 Alison Parker, 24, and Adam Ward, 27, of news station WDBJ in Roanoake, Virginia were killed one year ago on live television.

NEW YORK (FOX 5 NY) - One year ago Friday, a local news reporter in Virginia and a photographer were ambushed at point-blank range and killed by a former colleague while on live television.

Fellow journalists from across the country took to social media on the anniversary of the deaths of reporter Alison Parker, 24, and photographer Adam Ward, 27, of news station WDBJ in Roanoake, to express condolences and messages of remembrance.

WDBJ held a moment of silence during their morning newscast Friday. The video was shared on social media.

Parker was interviewing Vicki Gardner, a member of the local chamber of commerce, at about 6:45 a.m. on Aug. 26, 2015, when the gunman opened fired.

Gardner was also shot. She underwent surgery and continues to recover.

Vester Lee Flanagan II later led police on a road chase, before crashing his car. The former reporter who went by the name Bryce Williams when he worked on-air, later died at a hospital in northern Virginia. Police said he had shot himself.

Video posted to Twitter and Facebook of the horrific shooting from the gunman's perspective showed an outstretched arm holding the handgun and firing repeatedly at Parker as she tried to run away.

"Vester was an unhappy man. He quickly gathered the reputation of someone difficult to work with." said WDBJ News Director Marks. "He was sort of  looking out for people he could take offense to. After many incidents of his anger coming to the fore, we dismissed him. He didn't take that well. We had to call police to escort him from the building," said Marks.

Flanagan had reportedly filed complaints with the Equal Opportunity Commission after he was fired. The complaints were dismissed.