Arlington teen fights back after man attacks her near her home

A 14-year-old Arlington girl fought back when a man attacked her in the street Tuesday night.

ARLINGTON, Va. (FOX 5 DC) - A 14-year-old Arlington girl fought back when a man attacked her in the street Tuesday night.

Riley England says she was walking a little boy home from school with a friend when she noticed a man following them. It was just after  5 p.m. and already dark when the three turned onto South Irving Street from Second Street.

Sitting in the comfort of her Arlington Heights home with her mom Dawn by her side, Riley choked up retelling the story to FOX 5.

"I smacked him and I screamed," she said.

And then Riley says the man did something odd. He just stood there. (He) "watched me for a little until people started coming out and then he ran away".

Riley says she and her friend and the little boy then ran to a nearby home where a neighbor took them in.

Just prior to the assault Riley had called her mom to say she thinks she was being followed, then hung up. 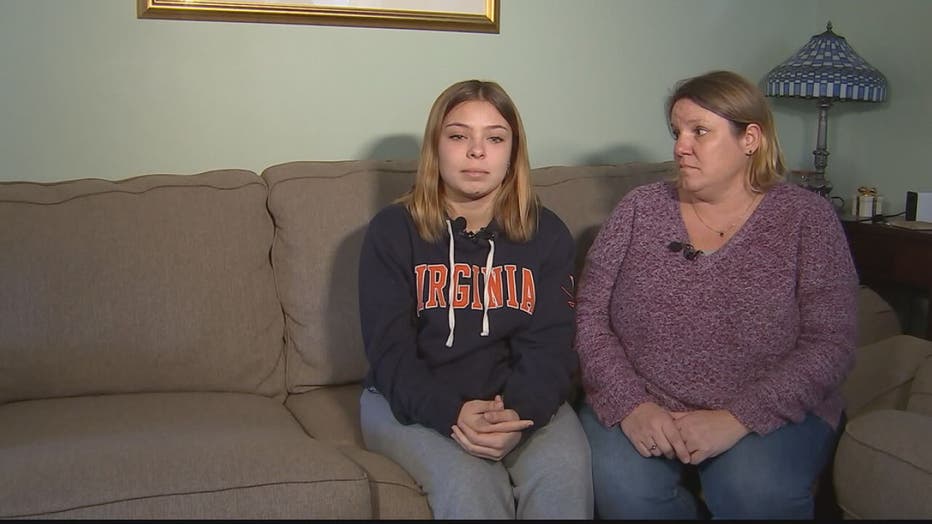 "As soon as I got to my car", said Dawn England. "I tried to call her again and she was already in hysterics crying she couldn't speak to me and a neighbor told me where they were and by the time I got home the police were already here".

Riley says she first noticed the man near the Dominion Apartments on South Courthouse Road. He was in blue pants and a hoodie and was on a cell phone and smoking. She says after the attack the police took her clothes and a cigarette butt the man may have discarded.

On the Nextdoor app, people have had nothing but praises for Riley, who is a freshman in high school.

"OMG...what a brave kid! Thank God she is ok!" said one person. Another wrote, "Bravo to your daughter for keeping her cool and handling the situation just right. That is absolutely terrifying."

Riley says she is telling the story because she wants the man caught.

"Because I don't know what his intentions were. If he saw me and was bored or had been watching me for a while," she said.

Police say they have so far found no video of the man or the assault. They have put out the following description:

The suspect is described as a white male, 30 – 40 years old, 5’7” – 5’9” tall with a lanky build. He has dark hair, a dark brown goatee with highlights of gray and stubble around the cheeks. He was wearing a tan hoodie and baggy, light blue jeans at the time of the incident.