Queen Elizabeth visited Tampa’s MacDill Air Force Base in 1991 to knight General Norman Schwarzkopf after the two countries served side by side in Desert Storm.

TAMPA, Fla. - Following the pomp and circumstance of Queen Elizabeth’s gallant arrival to Tampa in 1991 aboard the royal yacht Britannia, was a much more subdued private ceremony in which she knighted the general behind Operation Desert Storm.

In 1991, few details were released about the event that was held behind closed doors for the queen, her husband, General Norman Schwarzkopf and his wife at MacDill Air Force Base.

It wasn't until after he was knighted that General Schwarzkopf posed on the steps of Central Command with the ribbon of knighthood in his hands.

Following the ceremony, he stated, "You know what? We're really brothers in arms, comrades in arms throughout the entire war. And this war today, I mean, the war today represented the culmination of all of that. I told the queen when she gave it to me that the greatest honor I had was the fact of serving side by side with the magnificent men and women of the armed service of the United Kingdom." 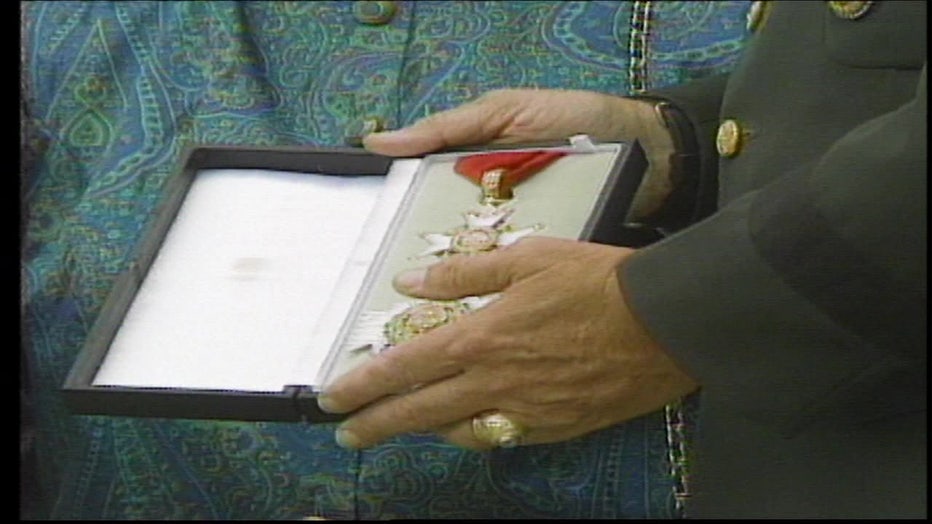 General Schwarzkopf was knighted by Queen Elizabeth during her 1991 visit to Tampa.

Though there is no monarchy in America, General Schwarzkopf received royal treatment after returning home, but he didn’t let it go to his head.

When a British reporter asked where he would put the necklace, the General quipped, "Around my neck, of course."

Queen Elizabeth visited Tampa in 1991. After arriving at Harbor Island aboard the Britannia in 1991, Queen Elizabeth attended a reception at the University of Tampa where she was gifted a crystal palm tree. She then visited with General Norma Schwarzkopf who told her about Operation Desert Storm before she jetted off to Texas with her husband from MacDill Air Force Base.

The queen’s visit to MacDill Air Force Base wasn’t just for higher ranks. With Queen Elizabeth at one end and her husband at the other, the pair worked the crowd inside Hangar three. Among those in line were those who might be called ‘commoners’ across the pond.

To put into perspective how lucky these people really are, consider the fact that few people in Britain had the opportunity given to select men and women at MacDill Air Force Base in 1991.