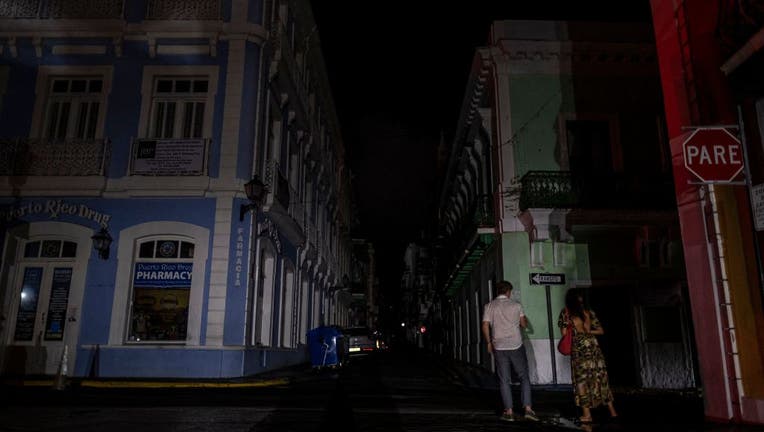 A couple walks on a dark street in San Juan, Puerto Rico after a major power outage hit the island on April 6, 2022. (Photo by Ricardo ARDUENGO / AFP) (Photo by RICARDO ARDUENGO/AFP via Getty Images)

Crews have restored power to some 650,000 customers out of nearly 1.5 million, but people in several neighborhoods have complained that the electricity went out once again as the island struggles to emerge from the blackout that also left more than 160,000 clients without water.

The outage forced the government to cancel classes and shutter agencies for the second day in a row on this U.S. territory of 3.2 million people as frustration and anger bubbled over.

"This is unbearable," said Maribel Hernández, 49, as she wiped her forehead with a small blue washcloth that she hung over her left shoulder.

Hernández, who is recovering from cancer, has been sleeping on the concrete floor in her home’s narrow outdoor patio with only a sheet because her mattress doesn’t fit there. She worries about being mugged because she lives in a working-class neighborhood with a high crime rate, but the heat inside her house is overwhelming.

"Those who have generators are doing well, but what about people like us?" she said, adding that she’s been forced to throw out all her food.

Officials with Luma, which took over transmission and distribution from Puerto Rico’s Electric Power company last year, have said they don’t know exactly when power would be fully restored but note crews have been working nonstop. 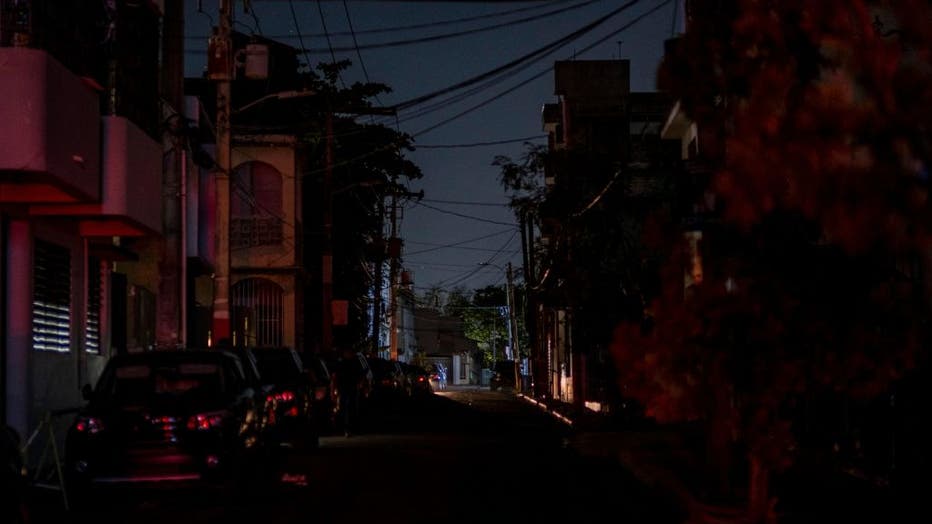 The headlights of a car are seen on an otherwise dark street in San Juan, Puerto Rico after a major power outage hit the island on April 6, 2022. (Photo by Ricardo ARDUENGO / AFP) (Photo by RICARDO ARDUENGO/AFP via Getty Images) 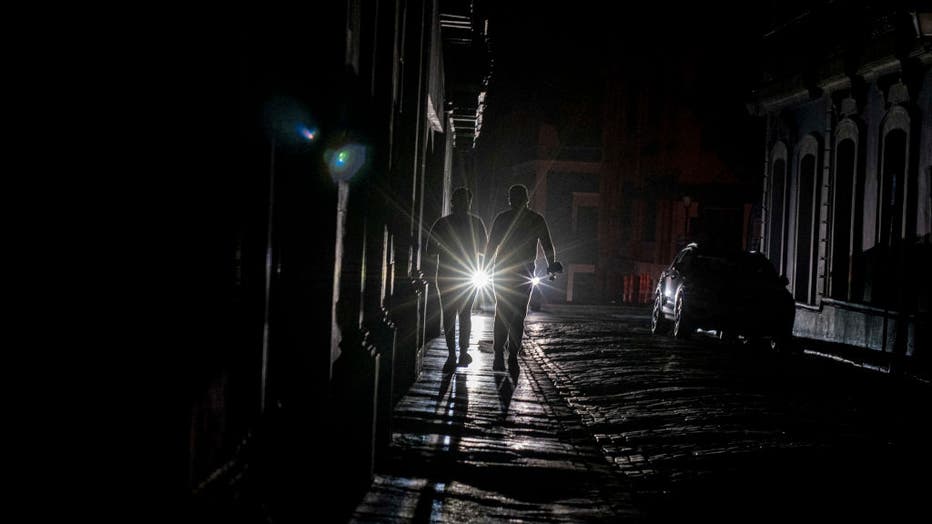 A cars headlights are seen past people walking on a dark in San Juan, Puerto Rico after a major power outage hit the island on April 6, 2022. (Photo by Ricardo ARDUENGO / AFP) (Photo by RICARDO ARDUENGO/AFP via Getty Images)

Hours later, dozens of angry protesters marched in front of the company’s headquarters, throwing eggs at the front door and dropping off bags of room-temperature chicken, cheese and ground meat.

The company has said that a circuit-breaker failure could have caused the blackout after a fire erupted late Wednesday at the Costa Sur power plant in southern Puerto Rico, but that it will be weeks before they’ll know the exact cause of the interruption.

Meanwhile, the lack of power prompted at least one city to distribute food to the elderly and ice to those with health conditions including diabetes as many wonder when exactly they’ll have lights again.

"I haven’t slept," said Fernando García, a 51-year-old construction worker who is more worried about not being able to find work in the past two days given the outage. "I don’t have a budget right now."

García stood outside a small outdoor cafeteria selling eggs and greasy turnovers known as empanadillas, grateful that the owner allowed him to charge his phone for the day as he continued to look for work. 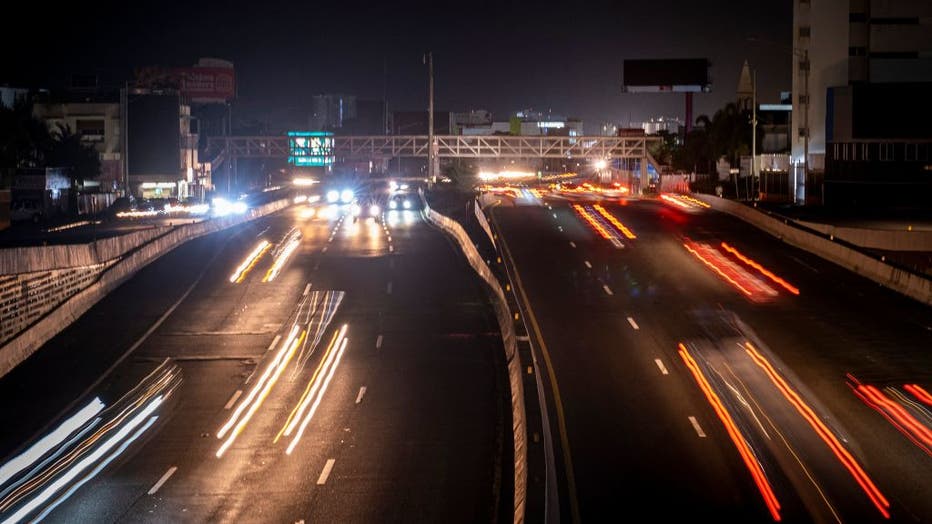 Motorists drive at night on a road in San Juan without street lights after a major power outage hit the island of Puerto Rico on April 6, 2022. (Photo by Ricardo ARDUENGO / AFP) (Photo by RICARDO ARDUENGO/AFP via Getty Images)

Luma CEO Wayne Stensby has called the outage "very unusual" and said it demonstrated the fragility of Puerto Rico’s electrical grid, which Hurricane Maria razed in 2017 as a powerful Category 4 storm. Emergency repairs were made at the time, but reconstruction efforts have yet to start on the crumbling electrical grid that has caused weekly outages in dozens of communities

Late Thursday, the U.S. Federal Emergency Management Agency said it had approved nearly $9.5 billion to Puerto Rico’s power company in September 2020 to rebuild the grid, but that it has not yet received any transmission and distribution projects for evaluation and approval of construction funds.

In addition, the Costa Sur generation plant, one of four main ones on the island, was damaged during a series of strong earthquakes that struck southern Puerto Rico in recent years.

Kevin Acevedo, a vice president for Luma, said Friday that the company hopes to have restored power to 1 million customers by late Friday night. 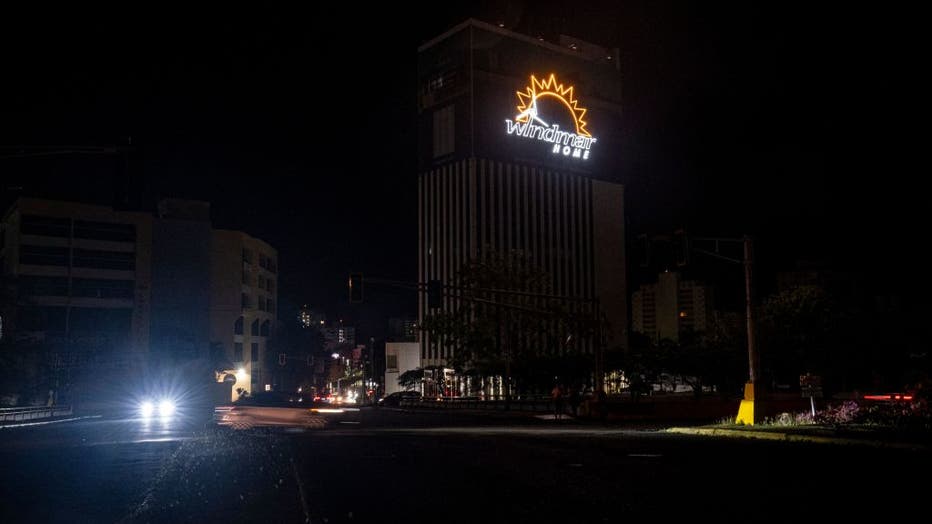 A billboard from a residential solar energy company in seen lit up in San Juan after a major power outage hit the island of Puerto Rico on April 6, 2022. (Photo by Ricardo ARDUENGO / AFP) (Photo by RICARDO ARDUENGO/AFP via Getty Images)

Those who have power back said they are relieved but worry about the impact the outage had on shrinking budgets already hard hit by the island’s more than decade-long economic crisis.

Felicia Serrano, manager of a small grocery store in a community called Barrio Obrero in the capital of San Juan, said she lost $2,000 worth of merchandise as a result of the blackout. The store runs on a small generator that keeps the lights on but doesn’t have the power to keep large refrigerators running.

"Ýou’re working under a lot of stress when you have no lights," she said as she grabbed large bunches of green plantains and placed them on worn shelves.

Many are now worried about the state of the electrical grid just two months before the Atlantic Hurricane season starts.

The outage comes as Puerto Rico’s electric power company tries to emerge from bankruptcy and restructure some $9 billion in public debt. The company has long struggled with corruption, mismanagement and a lack of investment into aging infrastructure.