Some protesters say they are not afraid of the virus and want businesses to reopen.

Rallying while Orange County officials held a news conference about the latest on the coronavirus, protesters brought signs and music, pushing for the state, and especially small businesses, to reopen.

For hours, protesters took to Downtown Orlando for one reason and one reason only: Pushing to reopen Florida.

"We believe that small business owners should have the right to govern themselves and decide if they want to open their businesses," said protester Richard Moffitt.

Nearly 50 representatives from hospitals, theme parks, small businesses and nonprofits will make up the task force and determine when best to reopen the county.

Mayor Demings made it clear "that decision will be based on the medical science and also as business-friendly as well."

The science and data about coronavirus is something the protesters don't trust.

The group was not wearing masks and not socially distancing.

"We don’t fear this virus down here. No. Me, personally? Not one bit. The numbers have not reached the normal seasonal flu," Moffitt said. 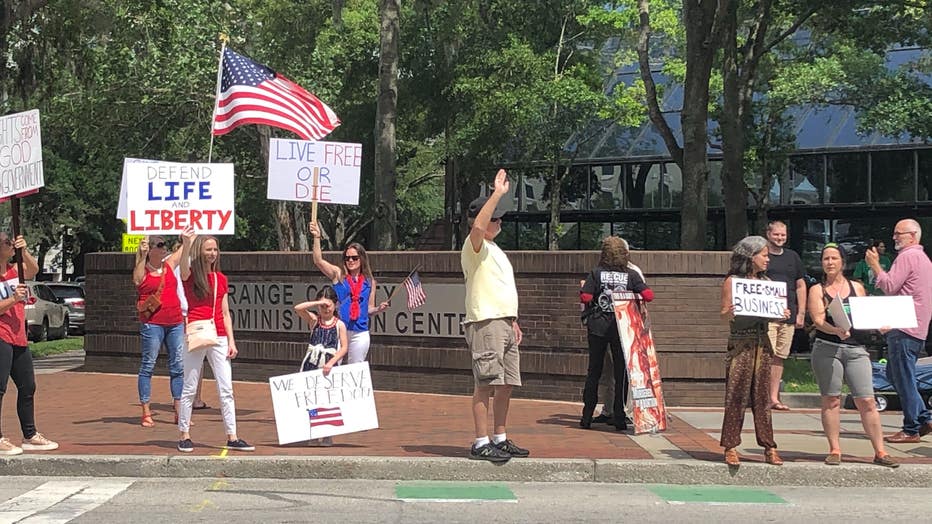 When asked about the protesters, Dr. Raul Pino with the county health department said, "The science is there. They don’t want to believe it. That’s fine. We just hope that they don’t have a price to pay for that."

"In my humble opinion, it’s much of a circus," Mayor Demings said.

No date to reopen has been set.

Mayor Demings says it will be a phased-in approach determined by the task force and based on data.

The new task force has its first meeting Wednesday morning.