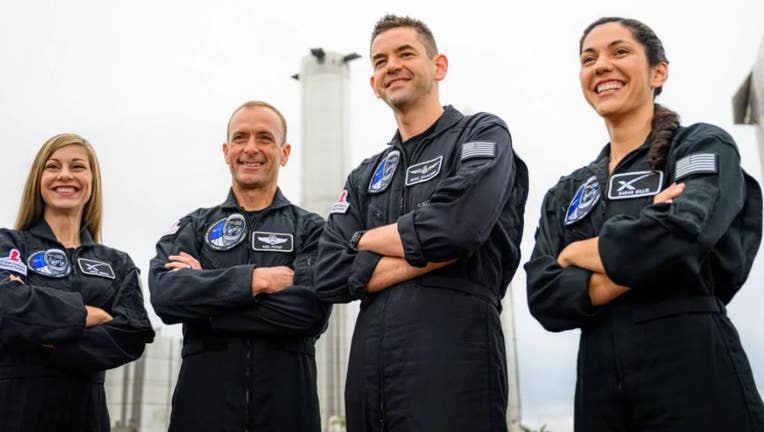 LOS ANGELES - Plans for three more crewed SpaceX private missions were announced this week, the first of which is targeted for launch later this year and will again be commanded by Jared Isaacman — a billionaire tech entrepreneur who previously experienced his own SpaceX flight.

If all goes well, the last of the three missions could be the first crewed flight aboard SpaceX’s Starship, the tallest and most powerful rocket ever built.

Isaacman, who founded the credit card processing company Shift4Payments, on Monday unveiled the Polaris Program— which aims to launch up to three human spaceflight missions in the future. The first mission, called Polaris Dawn, will include Isaacman, two SpaceX engineers and a retired Air Force pilot who will blast off aboard a Falcon rocket no earlier than November 2022.

They will circle the earth for up to five days, flying higher than any previous Dragon mission to date and hoping to reach the highest Earth orbit ever flown.

Isaacman previously paid an undisclosed amount for a three-day spaceflight for himself and three others last September as part of the Inspiration4 mission. That flight reached more than 350 miles high — well above the orbit of the International Space Station.

This time, SpaceX will be shooting for more than 400 miles in order to pass through part of the Van Allen radiation belts surrounding Earth. They'll also conduct a spacewalk, using new SpaceX suits, and use Starlink internet satellites launched by SpaceX to test communication from orbit.

Isaacman said that he and Elon Musk’s SpaceX are sharing costs for the upcoming flight but he would not provide details.

"The Polaris Program is an important step in advancing human space exploration while helping to solve problems through the use of innovative technology here on Earth," Isaacman said in a statement.

The second mission will build upon Polaris Dawn, continuing to "expand the boundaries of future human spaceflight missions, in-space communications and scientific research," according to the program’s website.

The third mission will be the first human spaceflight on Starship. Last week, Musk said he was awaiting final approval from the Federal Aviation Administration before launching the nearly 400-foot rocket on its first orbital test flight without humans on board.

NASA plans to use the fully reusable Starship to land astronauts on the moon as early as 2025. Musk, meanwhile, hopes to deploy a fleet of Starships to create a city on Mars, hauling equipment and people there.

The Polaris Dawn crew — Isaacman, SpaceX employees Sarah Gillis and Anna Menon and retired Air Force lieutenant colonel and Thunderbird pilot Scott Poteet — were selected because they "know each other well and have a foundation of trust they can build upon" as they seek to accomplish several first-time objectives.

Isaacman has over 7,000 flight hours of aviation experience, including ratings in multiple experimental and ex-military aircraft. He helped conceive of Inspiration4, SpaceX’s first flight of an all-civilian crew, which helped raise over $240 million for St. Jude Children’s Research Hospital.

Isaacman said Polaris Dawn will continue to raise funds and awareness for the hospital.