U.S. House Speaker Nancy Pelosi speaks in Poland after she led a delegation to Ukraine to meet with President Volodymyr Zelensky

ZAPORIZHZHIA, Ukraine - A long-awaited evacuation of civilians from a besieged steel plant in the Ukrainian city of Mariupol was under way Sunday, as U.S. House Speaker Nancy Pelosi revealed that she visited Ukraine’s president to show unflinching American support for the country’s defense against Russia’s invasion.

Video posted online by Ukrainian forces showed elderly women and mothers with small children bundled in winter clothing being helped as they climbed a steep pile of debris from the sprawling Azovstal steel plant’s rubble, and then eventually boarded a bus.

Ukrainian President Volodymyr Zelenskyy said more than 100 civilians, primarily women and children, were expected to arrive in the Ukrainian-controlled city of Zaporizhzhia on Monday.

"Today, for the first time in all the days of the war, this vitally needed (humanitarian) corridor has started working," he said in a pre-recorded address published on his Telegram messaging app channel.

U.S. House Speaker Nancy Pelosi and a congressional delegation affirmed U.S. support for Ukraine as it defends itself against Russian attacks.

The Mariupol City Council said on Telegram that the evacuation of civilians from other parts of the city would begin Monday morning. People fleeing Russian-occupied areas in the past have described their vehicles being fired on, and Ukrainian officials have repeatedly accused Russian forces of shelling evacuation routes on which the two sides had agreed.

Later Sunday, one of the plant’s defenders said Russian forces resumed shelling the plant as soon as the evacuation of a group of civilians was completed. 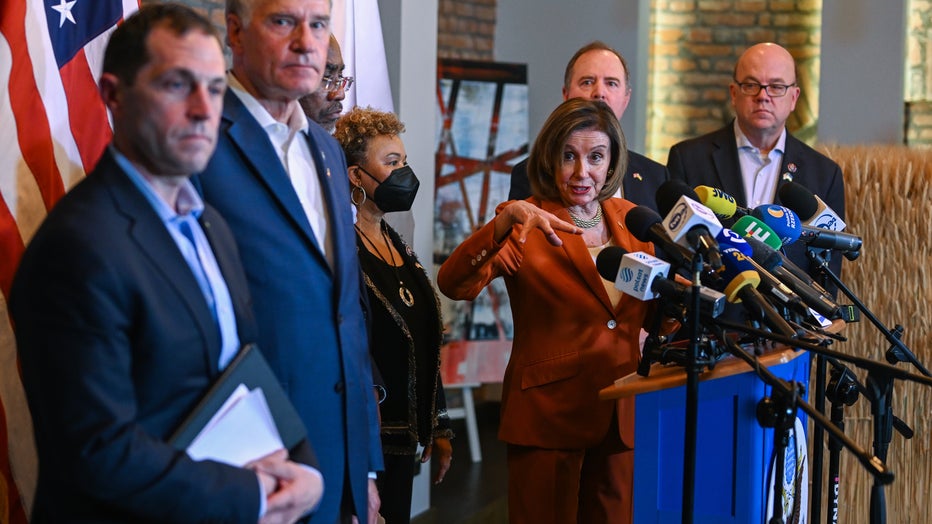 RZESZOW, POLAND - MAY 01: US Speaker of the House, Nancy Pelosi speaks to media together with a congressional envoy after a trip to Ukraine at the Bristol Hotel on May 01, 2022 in Rzeszow, Poland. (Photo by Omar Marques/Getty Images)

"Several dozen small children are still in the bunkers underneath the plant," Shlega said. "We need one or two more rounds of evacuation."

Sviastoslav Palamar, deputy commander of the Azov Regiment, which is helping defend the steel plant, told The Associated Press in an interview from Mariupol on Sunday that it has been difficult even to reach some of the wounded inside the plant.

"There’s rubble. We have no special equipment. It`s hard for soldiers to pick up slabs weighing tons only with their arms," he said. "We hear voices of people who are still alive" inside shattered buildings.

As many as 100,000 people may still be in blockaded Mariupol, including up to 1,000 civilians hunkered down with an estimated 2,000 Ukrainian fighters beneath the Soviet-era steel plant — the only part of the city not occupied by the Russians.

Ukrainian officials have estimated that about 2,000 of their troops are inside the plant in Mariupol, along with about 1,000 sheltering in the facility’s underground tunnels. Credit: Azov Battalion via Storyful

Mariupol, a port city on the Sea of Azov, is a key target because of its strategic location near the Crimea Peninsula, which Russia seized from Ukraine in 2014.

U.N. humanitarian spokesman Saviano Abreu said civilians who have been stranded for nearly two months at the plant would receive immediate humanitarian support, including psychological services, once they arrive in Zaporizhzhia, about 140 miles (230 kilometers) northwest of Mariupol.

Mariupol has seen some of the worst suffering. A maternity hospital was hit with a lethal Russian airstrike in the opening weeks of the war, and about 300 people were reported killed in the bombing of a theater where civilians were taking shelter.

A Doctors Without Borders team was at a reception center for displaced people in Zaporizhzhia, in preparation for the U.N. convoy’s arrival. Stress, exhaustion and low food supplies have likely weakened civilians trapped underground at the plant.

Ukrainian regiment Deputy Commander Sviatoslav Palamar, meanwhile, called for the evacuation of wounded Ukrainian fighters as well as civilians. "We don’t know why they are not taken away, and their evacuation to the territory controlled by Ukraine is not being discussed," he said in a video posted Saturday on the regiment’s Telegram channel.

Video from inside the steel plant, shared with The Associated Press by two Ukrainian women who said their husbands were among the fighters refusing to surrender there, showed men with blood-stained bandages, open wounds or amputated limbs, including some that appeared gangrenous. The AP could not independently verify the location and date of the video, which the women said was taken last week.

Meanwhile, Pelosi and other U.S. lawmakers visited Kyiv on Saturday. She is the most senior American lawmaker to travel to the country since Russia’s Feb. 24 invasion. Her visit came just days after Russia launched rockets at the capital during a visit by U.N. Secretary-General António Guterres.

Rep. Jason Crow, a U.S. Army veteran and a member of the House intelligence and armed services committees, said he came to Ukraine with three areas of focus: "Weapons, weapons and weapons."

In his nightly televised address Sunday, Zelenskyy said more than 350,000 people had been evacuated from combat zones thanks to humanitarian corridors pre-agreed with Moscow since the start of Russia’s invasion. "The organization of humanitarian corridors is one of the elements of the negotiation process (with Russia), which is ongoing," he said.

Zelenskyy also accused Moscow of waging "a war of extermination," saying Russian shelling had hit food, grain and fertilizer warehouses, and residential neighborhoods in the Kharkiv, Donbas and other regions.

"What could be Russia’s strategic success in this war? Honestly, I do not know. The ruined lives of people and the burned or stolen property will give nothing to Russia," he said.

In Zaporizhzhia, residents ignored air raid sirens and warnings to shelter at home to visit cemeteries Sunday, when Ukrainians observe the Orthodox Christian day of the dead.

"If our dead could rise and see this, they would say, ‘It’s not possible, they’re worse than the Germans,’" Hennadiy Bondarenko, 61, said while marking the day with his family at a picnic table among the graves. "All our dead would join the fighting, including the Cossacks."

Russian forces have embarked on a major military operation to seize significant parts of southern and eastern Ukraine following their failure to capture the capital, Kyiv.

Getting a full picture of the unfolding battle in eastern Ukraine is difficult because airstrikes and artillery barrages have made it extremely dangerous for reporters to move around. Also, both Ukraine and Moscow-backed rebels have introduced tight restrictions on reporting from the combat zone.

But Western military analysts have suggested the offensive was going much slower than planned. So far, Russian troops and separatists appeared to have made only minor gains in the month since Moscow said it would focus its military strength in the east. 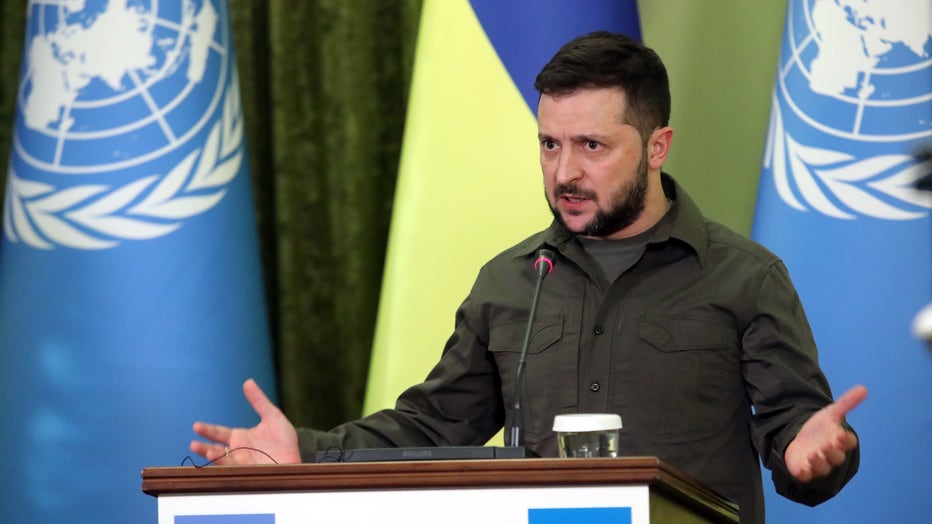 Hundreds of millions of dollars in military assistance has flowed into Ukraine since the war began, but Russia’s vast armories mean Ukraine will continue to require huge amounts of support.

With plenty of firepower still in reserve, Russia’s offensive could intensify and overrun the Ukrainians. Overall the Russian army has an estimated 900,000 active-duty personnel, and a much larger air force and navy.

In Russia’s Kursk region, which borders Ukraine, an explosive device damaged a railway bridge Sunday, and a criminal investigation has been started, the region’s government reported in a post on Telegram.

Recent weeks have seen a number of fires and explosions in Russian regions near the border, including Kursk. An ammunition depot in the Belgorod region burned after explosions were heard, and authorities in the Voronezh region said an air defense system shot down a drone. An oil storage facility in Bryansk was engulfed by fire a week ago.

Fisch reported from Sloviansk. Associated Press journalists Jon Gambrell and Yuras Karmanau in Lviv, Mstyslav Chernov in Kharkiv, and AP staff around the world contributed to this report.