A San Francisco family was visiting New Zealand when a volcano erupted on White Island, killing at least five people.

WHAKATANE, New Zealand - A San Francisco family detailed a harrowing account of what happened when a volcano blew in New Zealand on Monday killing at least five, documenting the aftermath with photos and videos for all to see.

"There was panic and terror for everyone on the island," David Schade of Noe Valley told KTVU by phone on Monday.

Schade only fully grasped the devastation of what had truly happened until there was a second eruption and "smoke started to pour all over the island."

As he retold the story, Schade took several pauses, crying at times as he remembered what happened. "I will be better," he said. "I don't know if they will be." In addition to the five killed, dozens were missing and presumed dead. Eighteen others were rescued, and authorities said some of them severely burned. 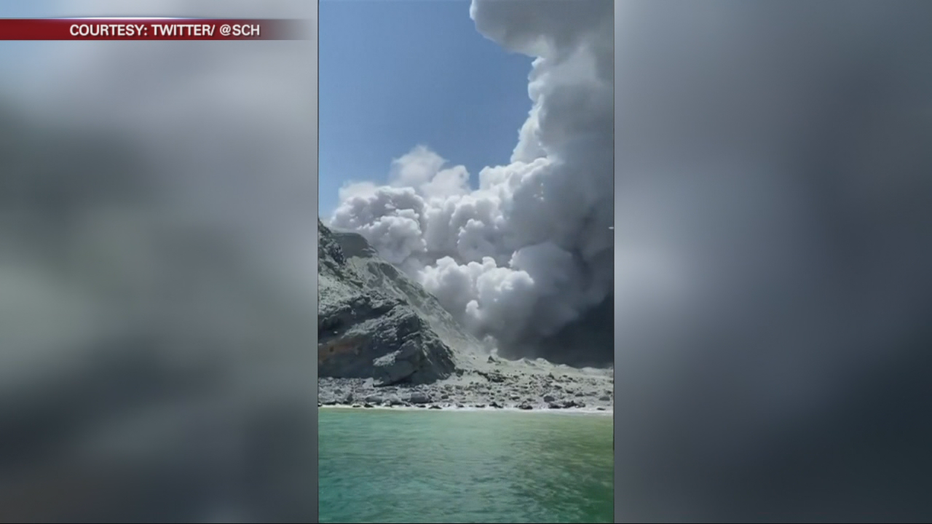 A volcano on a New Zealand island erupted Monday with a towering blast of ash and scalding steam as tourists were exploring the moon-like surface, killing five people and leaving perhaps two dozen others missing and presumed dead. Eighteen others wer

He and his wife, Dina, and son, Michael Schade, were on a "bucket-list" trip of a lifetime, and had embarked on a 14-day trip to New Zealand, where they booked a tour with White Island Tours. Schade described the tour company as very professional. He said the crew had gone over several safety precautions with them before they got off the boat and onto the volcano.

"We actually walked right up to the crater," David Schade said. "We saw volcanic activity coming out of the ground."

Schade said his family and the entire tour group had been at the edge of the crater just 30 minutes before the White Island volcano erupted. The volcano is a popular tourist spot about 30  miles off mainland New Zealand.

He noted that the birds in the area had been acting oddly and fish had been jumping out of the water just before the volcano blew. Bees had also just stung his wife, which someone told him was abnormal this time of year.

David Schade's son, Michael, took pictures while on his boat ride back, to show the devastation and heroism of the first responders.

Michael Schade's video showed a wall of ash and steam around White Island and a helicopter badly damaged and covered in ash.

“My thoughts with the families of those currently unaccounted for, the people recovering now, and especially the rescue workers,” Michael Schade wrote on Twitter.

David Schade said his wife had tried to help out by covering victims with blankets. He said that the victims were burned "head to toe."

Michael Schade's video showed a wall of ash and steam around the island and a helicopter badly damaged and covered in ash. He said one woman was badly injured but seemed “strong” by the end. Elissa Harrington reports

The terrifying disaster immediately raised questions of why people were allowed to visit the island after scientists had noted an uptick in volcanic activity in recent weeks. White Island is the tip of an undersea volcano.

The GeoNet agency, which monitors volcanoes and earthquakes in New Zealand, had raised the alert level on White Island on Nov. 18 from 1 to 2 on a scale where 5 represents a major eruption, noting an increase in sulfur dioxide gas, which originates from magma deep in the volcano. It also said that volcanic tremors had increased from weak to moderate strength.

Brad Scott, a volcanologist with research group GNS Science, said the alert level on White Island was often raised and then later dropped again without any eruption. He said there hadn’t been any major problems with tourists visiting the island in the past, though there had been some close calls.

As for the Schade family, this trip was supposed to be an adventure of a lifetime. It's left David Schade feeling saddened but also grateful.

"We could have died," he said.