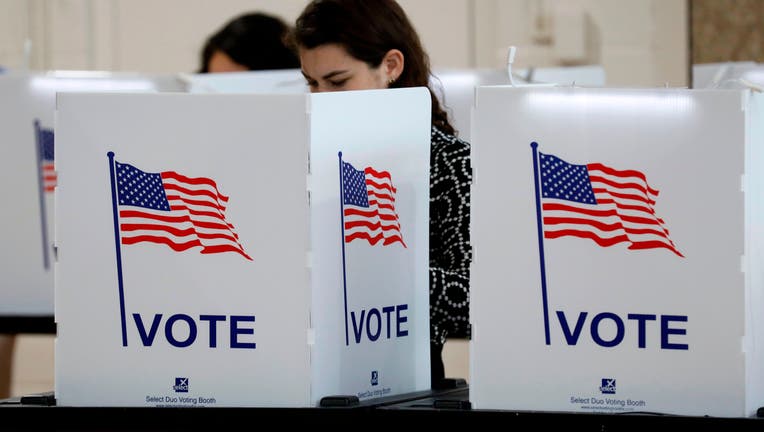 FORT LAUDERDALE, Fla. - Ohio's governor wants the state to delay in-person voting for the state's Tuesday presidential primary for three months to let the coronavirus outbreak subside, but Florida, Illinois and Arizona plan to push ahead.

Gov. Mike DeWine told a news conference Monday that he does not have the power to order the change, but some affected voters will file a lawsuit asking a judge to order it given the danger they would face if they had to go to the polls. He wants the new in-person date set for June 2.

“We should not force them to make that choice,” DeWine said. Absentee balloting would continue during the interim. Georgia already postponed next week's primary, and Louisiana has postponed its scheduled April 4 primary.

But Florida, Illinois and Arizona's governors' offices said Monday morning they were pushing forward with Tuesday's voting, even though they are losing polling sites and workers. However, Florida Gov. Ron DeSantis now has a late Monday afternoon press conference scheduled as does Arizona Gov. Doug Ducey.

In Illinois, there's no process for canceling or postponing the vote, said Matt Dietrich, spokesman for the State Board of Elections.

"This is unprecedented so it’s not clear exactly what the process would be for changing it, though it likely would involve a request to the attorney general to seek a court order," Dietrich said.

Turnout at the polling places is already expected to be light Tuesday as only the Democrats have a contested presidential primary and that is down to two contenders: Joe Biden and Bernie Sanders. Add in that the states were pushing early voting and vote-by-mail even before the outbreak and many fewer voters are expected to appear Tuesday at their neighborhood precinct.

The states are taking steps to limit voter and poll worker exposure to the coronavirus.

In Florida and Arizona, the states moved polling places located in nursing homes and assisted living facilities to avoid exposing the residents to outsiders. For some counties like Volusia, Florida, and Maricopa, Arizona — by far that state's largest — that became a benefit. The counties combined those polling places with others nearby, meaning they needed fewer workers.

In Arizona, the Republican governor and Democratic secretary of state released a video early Monday outlining the steps they’re taking to keep voters safe. Those include measures to keep distance between people, frequent hand washing by poll workers and disinfecting equipment regularly. They also asked voters to wash hands before and after visiting the polls.

“It’s been a lot of work but it’s well worth it because our democracy is worth it,” Secretary of State Katie Hobbs said in the video.

Broward County, Florida, is stocking its 421 polling locations with extra supplies, including 4,000 rolls of paper towels, gloves and more than 400 bars of soap.

“We’ve purchased gallons of rubbing alcohol and are having them transferred to spray bottles," said spokesperson Steve Vancore. “We've ordered cases upon case of Clorox wipes so polls workers can frequently wipe down the equipment and wipe down the voting booths."

The states have also been pushing early voting and voting by mail as a way to curtail any crowds at the polls. Chicago election officials say the effort paid off with 118,000 voters casting ballots in the mail in the city, which is an all-time record, according to the Chicago Board of Election Commissioners.

Despite the efforts, voters may experience disruptions Tuesday, particularly when polling places first open. In Pasco County, Florida, more than 150 poll workers dropped out, citing fears of the virus. Volunteers from the Tampa Bay-area county's shuttered schools are stepping in, but some polling places are being combined.

Noah Praetz, an elections consultant and former director of elections for Cook County, Illinois, said election officials in Illinois have done everything they can to manage the loss of polling locations and poll workers. But "the early morning hours will likely be shaky in some precincts as heroic poll workers get things up and running short handed."

He said he expected problems would be addressed quickly and hoped the voting process would be operating smoothly by late morning.

For most people, the new coronavirus causes only mild or moderate symptoms, such as fever and cough. For some, especially older adults and people with existing health problems, it can cause more severe illness, including pneumonia. The vast majority of people recover. According to the World Health Organization, people with mild illness recover in about two weeks, while those with more severe illness may take three to six weeks to recover.

If you feel sick

The Florida Department of Health has opened a COVID-19 Call Center at 1-866-779-6121. Agents will answer questions Monday through Friday, 8 a.m. to 5 p.m. Questions may also be emailed to covid-19@flhealth.gov. Email responses will be sent during call center hours.

CORONAVIRUS IN FLORIDA: What you need to know