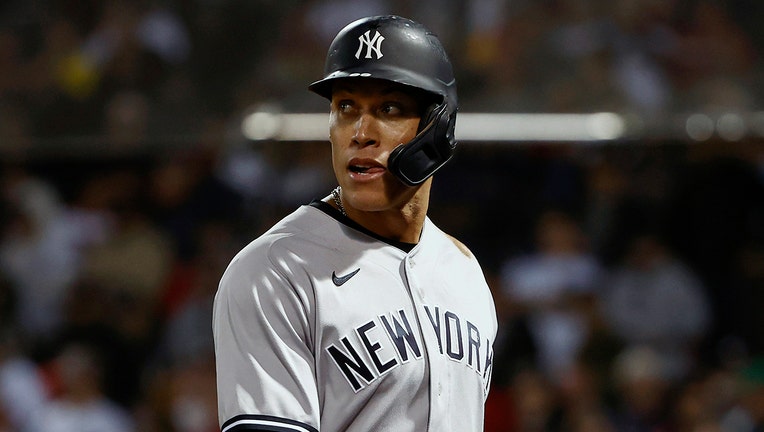 Aaron Judge of the New York Yankees during the AL Wild Card game against the Boston Red Sox at Fenway Park on Oct. 6, 2021, in Boston, Massachusetts. (Photo By Winslow Townson/Getty Images)

TAMPA, Fla. - Yankees star Aaron Judge refused to directly answer a question about his vaccine status Tuesday amid a requirement in New York City that every private sector employee be inoculated against the coronavirus.

"I'm still focused on just getting to the first game of spring training," Judge said from the team's Florida training complex. "So I think we'll cross that bridge after the time comes. But right now, so many things could change. So I'm not really too worried about that right now."

Just like Brooklyn Nets star Kyrie Irving, unvaccinated players on the Yankees and Mets will not be allowed to suit up at home due to the city's private employer mandate that went into effect Dec. 27.

The employer mandate is the same across the board, whether it's a sports team playing indoors or outdoors. A city hall official who was not authorized to speak on the record noted that the start of the season is a month away, too far out to make a determination about what will happen then as the city continues to monitor COVID-19 cases.

The Yankees said in a statement that team president Randy Levine was "working with city hall and all other appropriate officials on this matter."

"We will have no further comment," the team added.

The Yankees open their season at home against the rival Boston Red Sox on April 7.

Judge is a three-time All-Star and a leader in New York's clubhouse. He hit .287 with 39 homers last season and finished fourth in AL MVP balloting. He's eligible to become a free agent after this season, although he's expressed a strong interest in signing a long-term deal with New York.

Even if New York's mandate is lifted, unvaccinated Yankees players would have to sit out nine games scheduled in Toronto against the Blue Jays. Canada's government requires a person must have received a second vaccine dose — or one dose of Johnson & Johnson — at least 14 days prior to entry.

Major League Baseball and the players' association agreed as part of their new labor contract last week that unvaccinated players will not be paid for games in Toronto that they miss because of the mandate.

New York's first visit to Toronto is a three-game series that begins May 2.

Yankees manager Aaron Boone said Sunday that he is concerned about the roster impact of the COVID-19 rules in Toronto.

"It will be interesting, to say the least, how that situation unfolds," Boone said. "I think we still have a few guys at least that aren't vaccinated, so we'll be monitoring that situation closely and see how that plays out. But yeah, it's a concern."