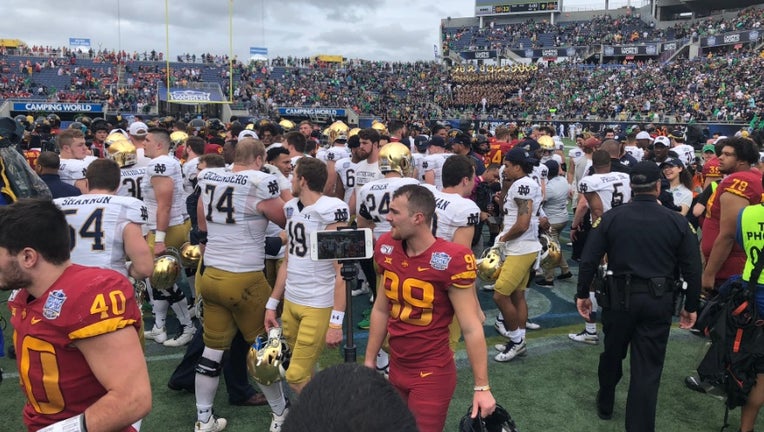 There were reportedly about 46,948 fans officially in attendance for the game -- the highest since 2016, according to FOX 35's Adam Shadoff.

Notre Dame is looking to the end the season with a six-game winning streak following a 45-14 loss at Michigan on Oct. 26. Iowa State has won 23 games over the past three seasons, which is one away from matching the best three-year stretch (1976-78) in school history.

The Iowa State defense against Notre Dame quarterback Ian Book. He became the first Fighting Irish QB to have at least 2,500 passing yards, 500 rushing yards and 30 touchdown passes in a season. Jalen Hurts was the only quarterback to do it in 2019.

Notre Dame: Wide receiver Chase Claypool caught 59 passes for 891 yards and 12 touchdowns this year. He has 2,013 receiving yards and 18 TDs overall, and is just the fourth Fighting Irish wide out since 1996 to have 400 or more yards in three consecutive seasons.

Iowa State: Sophomore Brock Purdy joins Jalen Hurts and Justin Fields are the only quarterbacks to have at least 27 passing touchdowns and eight rushing TDs in 2019. He has broken or tied 18 school records.

Notre Dame was 12th in the nation against FBS opponents by averaging 37.1 points on offense. The Fighting Irish defense was 12th in points allowed at 18.7. ... Iowa State has already set school records for touchdowns (53), points (409), passing TDs (29) and total offense (5,504 yards). ... Notre Dame and Alabama are the only teams not to have lost to an unranked team since the start of the 2017 season. ... Iowa State coach Matt Campbell has lead the Cyclones to bowl games in three straight seasons. It matches the school record (2000-02).

You can find more information HERE.