In the historic announcement, House Speaker Nancy Pelosi said she was authorizing the drafting of articles of impeachment against President Donald Trump.

In the historic announcement, Pelosi said “the president’s actions have seriously violated the Constitution,” and that Trump “leaves us no choice but to act.”

“If we allow a president to be above the law, we do so surely at the peril of our republic,” Pelosi said. 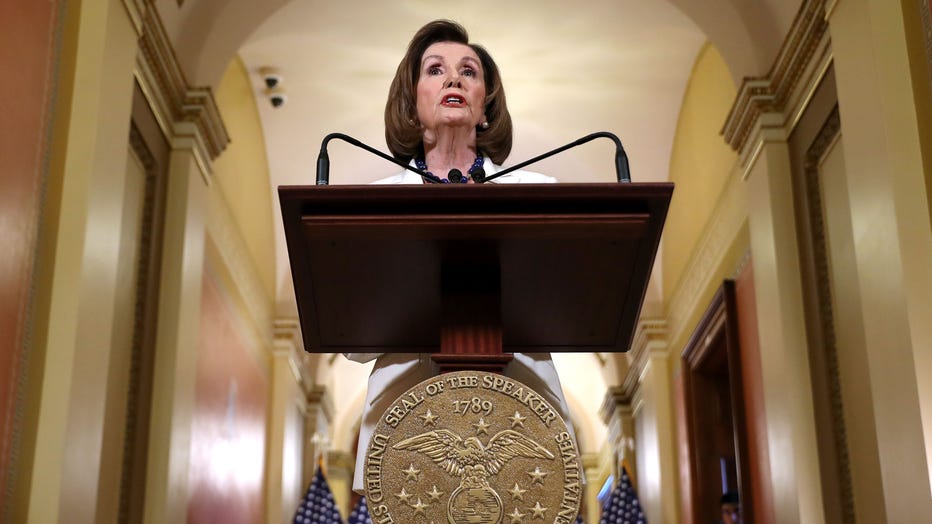 Speaker of the House Nancy Pelosi, D-Calif., announced that the House will proceed with articles of impeachment against President Donald Trump at the Speaker's Balcony in the U.S. Capitol on Dec. 5, 2019 in Washington, D.C. (Photo by Chip Somodevilla

With somber tones, drawing on the Constitution and the Founding Fathers, Pelosi stood at the speaker's office at the Capitol and said she was authorizing the drafting of formal charges “sadly but with confidence and humility.”

“With allegiance to our founders and a heart full of love for America, today I am asking our chairmen to proceed with articles of impeachment," she said.

At the heart of the impeachment probe is a July call with the president of Ukraine, in which Trump pressed the leader to investigate Democrats as Trump was withholding aid to the country.

On Twitter, Pelosi echoed her announcement, stating that Trump’s “abuse of power undermined our national security and jeopardized the integrity of our elections.”

Trump tweeted that if Democrats “are going to impeach me, do it now, fast." He said he wants to get on to a “fair trial” in the Senate. The president also said that Democrats have “gone crazy.”

At the White House, press secretary Stephanie Grisham tweeted that Pelosi and the Democrats “should be ashamed.”

The chairmen of the House committees conducting the impeachment inquiry will begin drafting the articles, and some lawmakers are expecting to remain in Washington over the weekend.

On Wednesday, Pelosi met behind closed doors with her Democratic caucus, asking, “Are you ready?” The answer was a resounding yes, according to those in the room.

Democrats have been charging toward a Christmastime vote on removing the 45th president, a situation Pelosi had originally hoped to avoid.

A fourth expert called by Republicans warned against rushing the process, arguing this would be the shortest of impeachment proceedings, with the “thinnest" record of evidence in modern times, setting a worrisome standard.

Trump is alleged to have abused the power of his office by putting personal political gain over national security interests, engaging in bribery by withholding $400 million in military aid Congress had approved for Ukraine; and then obstructing Congress by stonewalling the investigation.