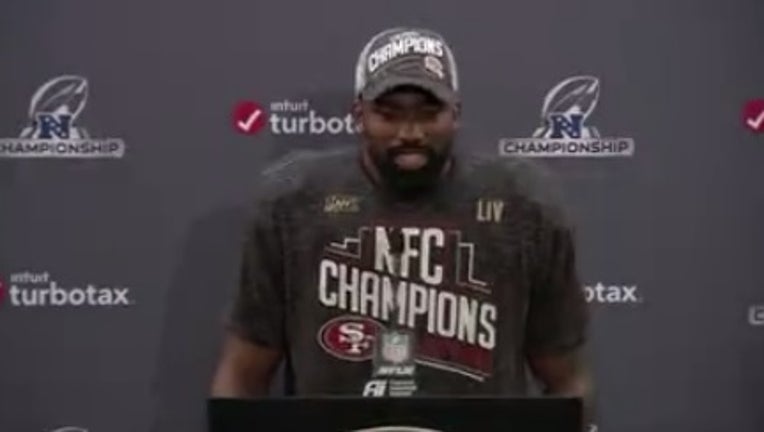 NEW SMYRNA BEACH, Fla. - Paddling out, “surfing” in the endzone, that signature touchdown celebration was seen around the world four times Sunday night during the NFC Championship game.

The man doing it, San Francisco 49ers running back Raheem Mostert, not forgetting where he came from in New Smyrna Beach.

The 27-year-old is going to the Super Bowl.

Jenkins says there are many things that set Mostert apart from the pack.

“Well for one, a 3.9 GPA. That says a lot about his character. And, he could run. He returned nine kickoffs in high school. He was a team leader,” Jenkins said.

Mostert also lettered in track. Those weren’t his only talents. He actually got approached to surf professionally.

But, the running back says he chose football because he wanted to make a difference.

“When I got that call from the guy who offered me the sponsorship to represent Billabong, I just said, 'Hey, I truly want to be the first person in my family to graduate and take the life lessons that come with going to college,” Mostert told FOX.

But this is where the “Cinderella story" starts. Mostert wasn’t recruited heavily out of high school.

“He didn’t have a single scholarship offer until after Thanksgiving of his senior year and it was Purdue, and he stuck by them,” Jenkins said.

He broke records on the football field as a Boilermaker and also on the track and field team.

Then, he faced another battle, trying to make it at the next level in the NFL.

Mostert wasn’t drafted, he signed as a free agent. He was released by six different NFL teams before San Francisco picked him up for their practice squad. The rest, as they say, is history.

“That’s a guy that’s been knocked down and keeps getting up,” Jenkins said.

While Coach Jenkins is proud of Mostert’s record-breaking 220 rushing yards and four rushing touchdowns in the NFC Championship game, he’s even more proud to see Mostert in his newest role as a dad.

“He had his child there with him, as a husband. To me that’s the important thing,” Jenkins said.

Mostert was seen in his postgame TV interviews holding his baby boy.

Folks around New Smyrna Beach are so proud of Mostert. Several described Mostert as a really nice, well-mannered hardworking kid.

An old neighbor of his told FOX 35 News that Mostert worked part-time at the Burger King on 44 in New Smyrna.

Several folks admitting they’ll be jumping on the 49er’s bandwagon to cheer on their hometown boy on.