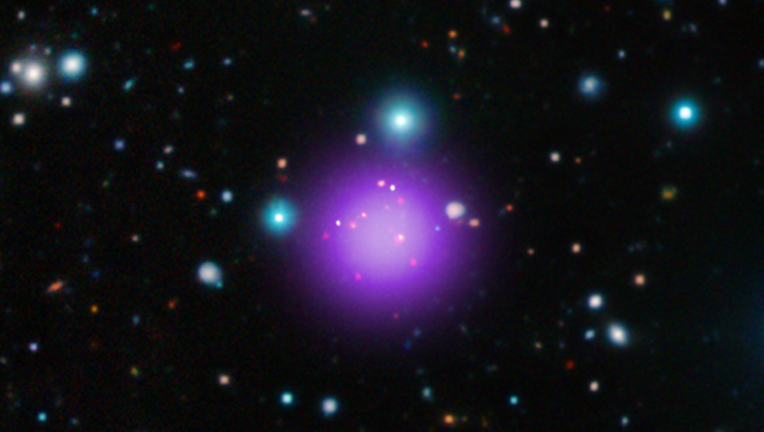 LOS ANGELES, CA (FOX 11) - A new record has been set for finding the farthest galaxy cluster known to man. The cluster called CL J1001+0220 is located about 11.1 billion light years from Earth.

The cluster is also known as CLJ1001, for short.

It was discovered by the Chandra X-ray Observatory in conjuction with the ESO's UltraVISTA telescope and the Atacame Large Millimeter Array. They used a method called reshifting to determing the distance of 11.1 billion light years.

Published in the Astrophysical Journal on August 30, 2016, Tao Wang of the French Alternative Energies and Atomic Energy Commission said, "This galaxy cluster isn't just remarkable for its distance, it's also going through an amazing growth spurt unlike any we've ever seen."

The cluster appears to still be forming to a mature cluster, and it is the first such cluster to be overserved at this stage of its evolution.  Inside the cluster are 17 galaxies, and nine of the 11 massive galaxies have new stars forming at a very high rate of about 3,400 suns per year.  To compare that to our own Milky Way galaxy, it only produces one sun per year.

Astronomers believe the galaxy cluster might have been caught right after birth.

Before this discovery, only loose collections of galaxies had been seen at these long distances. This discovery pushes back the formation time of galaxy clusters by 700 million years.

More information can be found at NASA's website here.