Credit: SES of Ukraine via Storyful

KYIV, Ukraine - Nearly half of Ukraine’s territory needs to be cleared of mines amid Russia’s war on the country, the country’s State Emergency Service (SES) estimated in a recent report — echoing a previous warning from President Volodymyr Zelenskyy.

Ukrinform, the state-run information news agency of Ukraine, reported on Monday that about 300,000 square kilometers of the Ukrainian territory need "humanitarian demining." With Russia’s recent retreat of Ukraine’s capital as well as other cities, shifting its focus east, the atrocities left behind and lingering dangers have come more into focus.

"According to our preliminary estimates, it is about 300,000 square kilometers, if we all understand, it is almost half of the territory of our country," Oleh Bondar, an SES official, told the news outlet, according to an English translation.

Bondar said that an average of 2,000 to 6,000 explosive devices are being removed and neutralized daily by pyrotechnic units, the news outlet reported.

"Compared to the period before the Russian invasion, these figures have increased almost 10 times," Bondar added.

Earlier this month, Zelenskyy warned his people that retreating Russian forces had created "a complete disaster" outside the capital of Kyiv, leaving mines across "the whole territory."

"They are mining homes, mining equipment, even the bodies of people who were killed," Zelenskyy said in a nightly video address to the nation. "There are a lot of tripwires, a lot of other dangers." 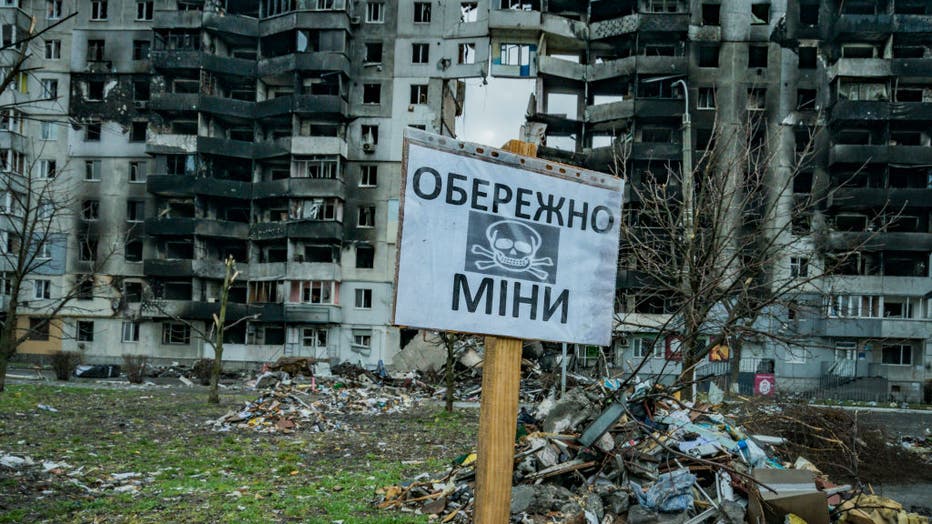 A mine warning sign is pictured in a destroyed park of Borodianka, a city near Kyiv, after the withdrawal of the Russian troops during the invasion of Russia on Ukraine, on April 9, 2022. (Photo by Celestino Arce/NurPhoto via Getty Images)

Zelenskyy told residents to wait to resume their normal lives until they are assured that the mines had been cleared and the danger of shelling had passed.

Meanwhile, Russian President Vladimir Putin this week vowed that Russia's bloody offensive in Ukraine would continue until its goals are fulfilled and insisted the campaign was going as planned — despite a major withdrawal in the face of stiff Ukrainian opposition and significant losses.

Russia invaded on Feb. 24, with the goal of taking Kyiv, toppling the government and installing a Moscow-friendly regime, according to Western officials. But in the six weeks since, Russia’s ground advance stalled, its forces lost potentially thousands of fighters and the military stands accused of killing civilians and other atrocities.

In recent days, Russian troops have shifted the focus to the eastern Donbas region, where Ukraine said it was investigating a claim that a poisonous substance had been dropped on its troops. It was not clear what the substance might be, but Western officials warned that any use of chemical weapons by Russia would be a serious escalation of the already devastating war.

On Wednesday, the presidents of Poland, Lithuania, Latvia and Estonia — all NATO countries that worry they may face a Russian attack in the future if Ukraine falls — visited Ukraine in a show of support and met with Zelenskyy.