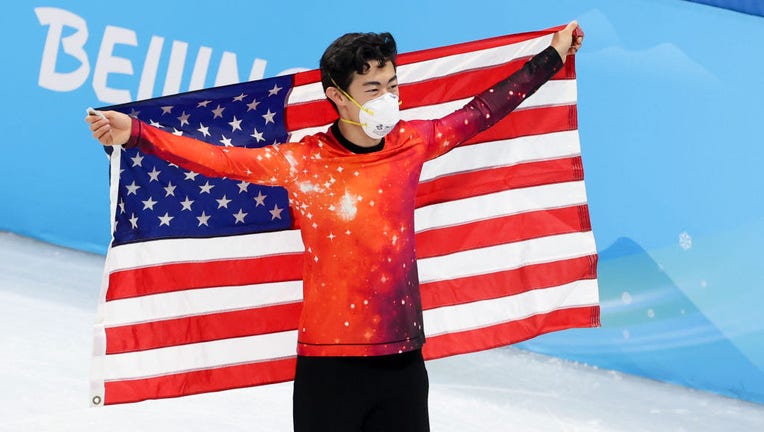 BEIJING - Nathan Chen remembers making the long drive with his mother from his home in Utah to Rafael Arutyunyan's training base in Southern California. He had started out in figure skating just a few years earlier, using his sister's skates and sleeping in the car to follow his Olympic dreams.

Ten years later, Chen sat alongside Arutyunyan as his scores were read and that dream realized.

With a nearly perfect free skate on the heels of a record-setting short program, the 22-year-old Yale student walked away with the gold medal at the Beijing Games on Thursday. He became the first American figure skating champion since Evan Lysacek in 2010 and capped one of the most dominant four-year runs in the history of the sport.

"My mom and I grew up quite poor. We really didn't have much money," Chen said. "She would just scrap together some dollars to try to pay Raf, and Raf obviously knew about the situation and thanks to the kindness of his heart, was able to just continue taking me in, and taking as much money as we could provide him."

Arutyunyan would try to give the money back sometimes, Chen said, "but I would always try to stick it in his pocket."

On Thursday, Chen was able to give his old coach something priceless.

"I’m happy. Just emotional," Arutyunyan said. "He made it."

Inside historic Capital Indoor Stadium in China, the nation both his parents immigrated from, Chen landed all five of his quads during his "Rocketman" program set to the soaring film score by Elton John. The statistics and data science major finished with an insurmountable total of 332.60 points, just three off his own world record and 22 points ahead of his closest competition. Yuma Kagiyama and Shoma Uno of Japan took silver and bronze.

Chen also firmly put in the past any lingering memories of his brutal disappointment four years ago in Pyeongchang, when not even a monumental free skate could rescue his medal hopes after a disastrous short program.

This gold medal might not be the last Chen takes home, either.

The Americans, who earned silver behind the Russians in the team event Monday, were awaiting confirmation from the IOC and International Skating Union that "legal issues" holding up the medal ceremony were related to reports of doping linked to their biggest star, Kamila Valieva. That could ultimately elevate the U.S. to the gold medal, a second for Chen.

"I mean, I don't really feel like I'm the most qualified person to talk about it," Chen said. "Whatever ends up being the case will be the case, but I'm still wrapped up in what I was able to do today."

The Salt Lake City native did his part for the American team with a winning short program last Friday. Vincent Zhou, who was forced to withdraw from the individual event due to a positive COVID-19 test, would also earn a gold medal for the U.S. because he performed his free skate on Sunday.

The suave, down-to-earth Chen and his Japanese rivals separated themselves from the field during their short programs, when Chen shattered the world record with a flawless performance to "La Boheme." When they took to the ice for the free skate, Kagiyama and Uno made just enough mistakes to clear the way for Chen's coronation.

Performing to "Bolero," one of the most popular musical selections of the Beijing Games, Uno under-rotated a quad salchow and quad toe loop, then was dinged for his combination spin late in the program to finish with 293 points.

Then it was the 18-year-old Kagiyama, performing to music from the film "Gladiator," who popped his triple toe loop and triple salchow. It was still enough to score 310.05 points and earn a fist pump in the kiss-and-cry area, but not enough to add any pressure on Chen, who was calmly skating across the placid ice as Kagiyama’s score was read.

With a socially distanced crowd watching Thursday afternoon in Beijing, and millions back home on late-night TV, Chen soared through his opening quad salchow. He landed four more effortless quads, his only slight bobble coming on a late combination sequence, and couldn't wipe the grin from his face as he seemingly reached for the sky.

The lyrics to "Rocketman" that played through the old home of ping-pong diplomacy — "And I think it’s gonna be a long, long time, ’til touchdown brings me ’round again" — seemed altogether fitting for the moment.

Chen basked in the spotlight in the middle of the ice, then headed off to hear his scores, which by that point were a mere formality. Once they were read, Chen's longtime coach raised his arm like a triumphant boxer.

"He deserves it," said American Jason Brown, who finished in sixth place. "I’ve gotten to compete with him over the last four years — at all the world championships, every national championship, the Grand Prix. There is no one more deserving. He worked so hard. He’s so unbelievably talented. I’m so proud to be a teammate."

While the spotlight shined bright as ever on Chen, it seemed to fade away for his longtime hero and Japanese rival.

Yuzuru Hanyu arrived in Beijing aiming to become the first men’s skater since Gillis Grafstrom in 1928 to win a third straight Olympic gold medal. But after missing most of the past year to an ankle injury, the 27-year-old struggled through his short program on Tuesday, essentially taking him out of contention for a medal.

All that was left for Hanyu was a go-for-broke shot at the quad axel, a 4 1/2-revolution jump that has never been landed in competition. He came close but couldn’t quite hold onto the landing, then fell again on his quad salchow before an emotional finish to what could be his final performance on Olympic ice.

His score left Hanyu in fourth, just out of the medals behind his two teammates.

And, of course, behind the new American champion.