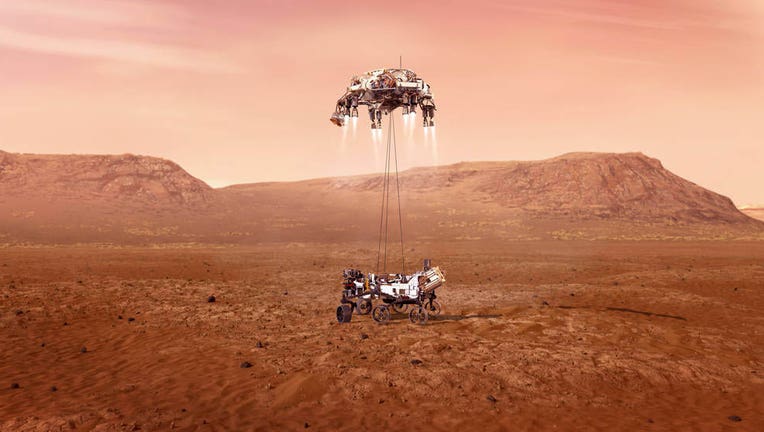 An illustration of NASA’s Perseverance rover landing safely on Mars. Hundreds of critical events must execute perfectly and exactly on time for the rover to land safely on Feb. 18, 2021. (Photo credit: NASA/JPL-Caltech)

Ingenuity, NASA's miniature Mars helicopter, is nearly ready to make history with the first powered flight on another planet.

The team at NASA's Jet Propulsion Laboratory announced Friday that it had completed final reviews of systems integrating the copter with the Perserverance rover.

JPL lead engineers Farah Alibay and Timothy Canham said they were readying for the historic mission.

"Yes, we are definitely very excited," Canham said in an update. "Right now, the helicopter is still attached to the rover. So, we're keeping it warm and fed. We're charging the batteries. And, we're also working with Farah's team to identify a final site for the helicopter."

On Wednesday, JPL announced that it had chosen the flight zone in which to deploy Ingenuity.

Alibay said the first thing her team has to do to prepare for the next mission is to drop the debris shield that protects the helicopter, its delivery system and the rover from rocks and other hazards.

"Then, we're going to travel several days to the helicopter dropoff location," she explained.

"Once we get there, it's actually going to take us about a week to deploy the helicopter," Alibay noted.

Around 60 days after Perseverance's Feb. 18 landing, the Mars Helicopter Delivery System will deploy the helicopter, rotating and releasing it about five inches above the Martian surface.

The helicopter's delivery system will remain attached to Perseverance for the remainder of its time on Mars.

Canham said he had been working very closely with Alibay's team to make sure all commands are ready to fire and to identify the perfect, flat site for Ingenuity with not too many big rocks but a good texture so that the rover's "navigation cameras can find their way across the surface."

After Perseverance releases Ingenuity, the helicopter -- which will be charged by its own solar panel -- has a month-long window for up to five test flights which are expected to begin no earlier than the first week of April.

On the ground, the rover will enable communication with mission controllers on Earth and provide environmental monitoring and imaging support.

On Tuesday, NASA is scheduled to hold a virtual briefing at 1:30 p.m. ET on the Ingenuity mission.

The briefing will be broadcast live on NASA Television, the NASA app, and the agency’s website and multiple social media platforms.