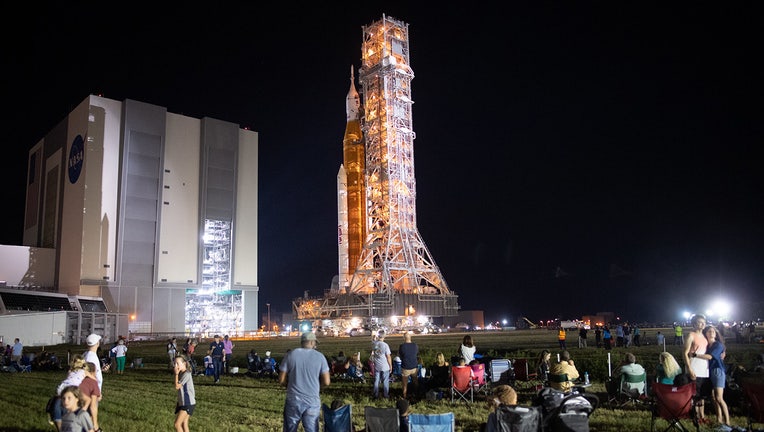 Invited guests and NASA employees watch as NASA’s Space Launch System (SLS) rocket with the Orion spacecraft aboard is rolled out of the Vehicle Assembly Building to Launch Pad 39B, Tuesday, Aug. 16, 2022, at NASA’s Kennedy Space Center in Florida. (

The Space Launch System rocket and Orion spacecraft exited the Vehicle Assembly Building (VAB) at Kennedy Space Center around 10 p.m., starting the journey on a vehicle known as the Crawler Transporter 2 to Launch Pad 39B, about 4 miles to the east. The trip takes between 8 and 11 hours as the crawler moves between 1 and 2 mph.

The High Bay 3 doors of the VAB opened Tuesday afternoon to reveal the mobile launcher and crawler inside getting ready for the move. 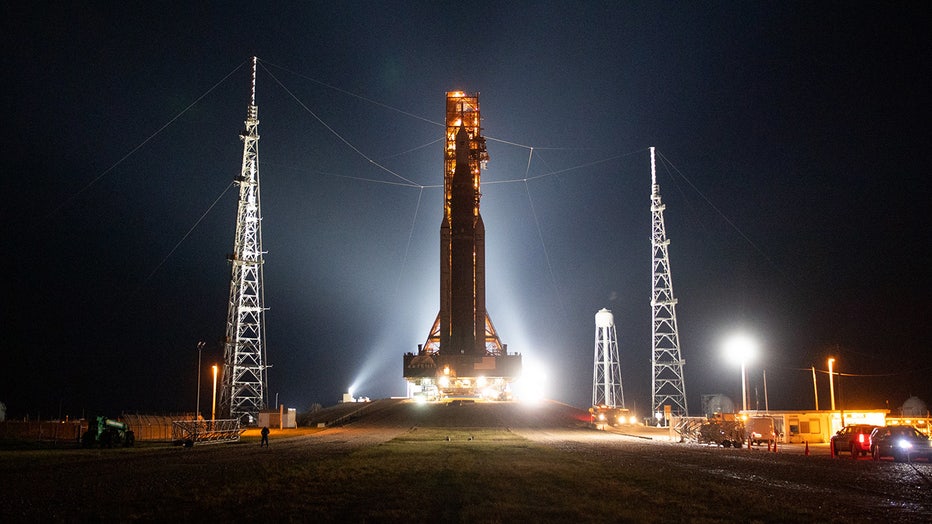 NASA’s Space Launch System (SLS) rocket with the Orion spacecraft aboard is seen atop the mobile launcher as it moves up the ramp at Launch Pad 39B, Wednesday, Aug. 17, 2022, at NASA’s Kennedy Space Center in Florida. (NASA/Joel Kowsky)

The first motion of the massive moon rocket was scheduled to start around 9 p.m. However, a storm cell brought lightning within 10 miles of the space center delaying the first motion. Florida is known for its summer thunderstorms, but this particular storm was the only one for about 200 miles, and it just happened to push over Kennedy Space Center when NASA intended to start the rollout.

After 10 p.m., NASA's worm logo and the full 322-foot-tall rocket and Orion spacecraft could be seen moving away from the VAB, which has been its home during the final months of launch preparations. Thousands of people came out to KSC, arriving hours early to see the rocket's last journey on Earth.

The crawler completed the SLS's journey to the launch pad early Wednesday morning. The same launch complex hosted the final Apollo mission to the moon in 1972. 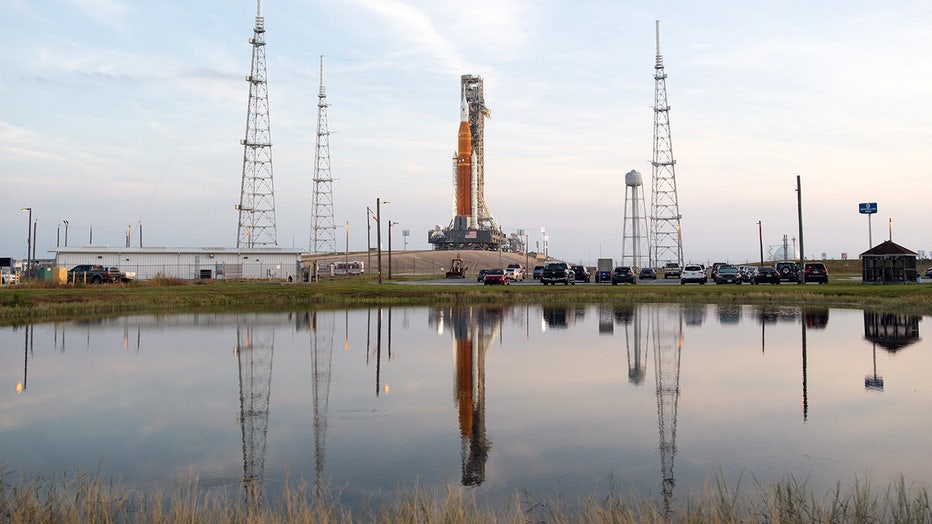 NASA’s Space Launch System (SLS) rocket with the Orion spacecraft aboard is seen atop the mobile launcher as it is rolled up the ramp at Launch Pad 39B, Wednesday, Aug. 17, 2022, at NASA’s Kennedy Space Center in Florida. (NASA/Joel Kowsky)

SLS is slated to launch the uncrewed Orion spacecraft beginning the Artemis 1 mission on Aug. 29 at 8:33 a.m. The liftoff will mark the first time a rocket has launched a human-rated spacecraft to lunar orbit in 50 years.

There are many goals of this test flight, including testing Orion’s communication, navigation and guidance systems, ensuring the overall launch and performance of SLS and ensuring Orion’s heat shield can withstand Earth re-entry at 25,000 mph.

Around 100,000 people are expected to travel to Florida's Space Coast to see the historic launch. If you're one of the thousands traveling to witness the launch, here is a list of possible viewing spots. 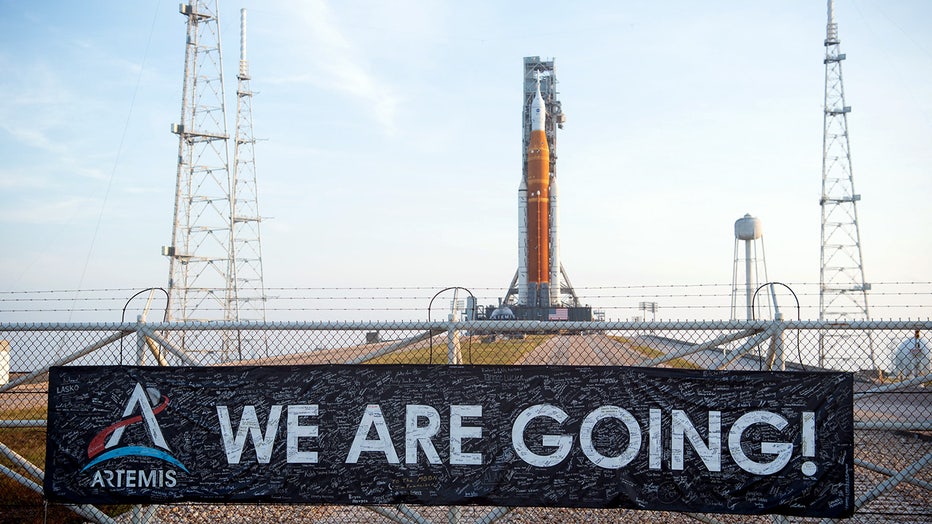 NASA’s Space Launch System (SLS) rocket with the Orion spacecraft aboard is seen atop a mobile launcher at Launch Pad 39B, Wednesday, Aug. 17, 2022, after being rolled out to the launch pad at NASA’s Kennedy Space Center in Florida. (NASA/Joel Kowsky

If the launch is delayed, the space agency also has Sept. 2 and Sept. 5 as backup launch dates.

While Artemis 1 will not have any humans aboard, there is one mannequin and two mannequin torsos loaded up the Orion spacecraft. The mannequins – dubbed "Moonikins" by NASA – will capture vital data for the future human crew.

The Artemis 2 mission is expected to launch a crew of four astronauts from NASA's Kennedy Space Center to lunar orbit. Later four astronauts will launch on the Artemis 3 mission making a historic return to the moon's surface by 2025.

LINK: Get more on this story at FOXweather.com