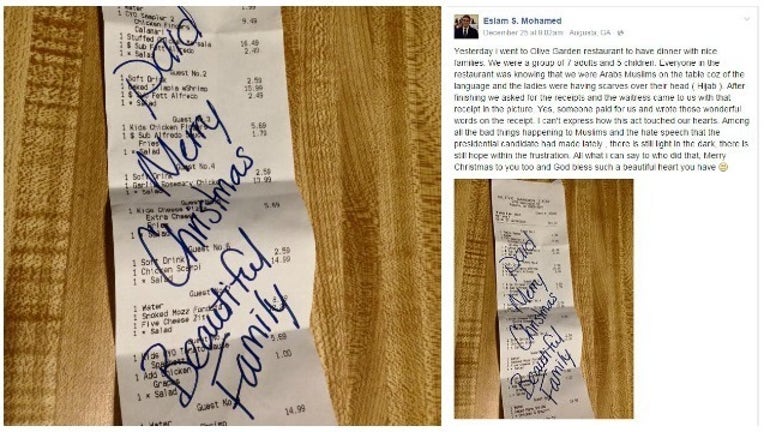 AUGUSTA, Ga. - A Muslim man received an unexpected surprise while dining at an Olive Garden in Augusta, Georgia last week.

Augusta resident Eslam Mohamed said he ate at the popular chain, located in the 2700 block of Washington Road, on Christmas Eve with a group of other Muslim families.

“Everyone in the restaurant was knowing that we were Arabs Muslims on the table coz of the language and the ladies were having scarves over their head (Hijab),” Mohamed wrote on Facebook.

Once they were finished eating, they asked for the receipts and that’s when the waitress handed them something they were not expecting... It was one large receipt with the following boldly written on top of it:

“Someone paid for us and wrote those wonderful words on the receipt. I can’t express how this act touched our hearts,” he said.  “Among all the bad things happening to Muslims and the hate speech that the presidential candidate had made lately, there is still light in the dark, there is still hope within the frustration.”

Mohamed wished the anonymous person who paid it forward a Merry Christmas and said “God bless such a beautiful heart you have.”

His post, which includes a photo of the receipt, has been shared more than 19,000 times. According to the photo, at least $138 was paid for.

APP USERS: View the photo of the receipt here