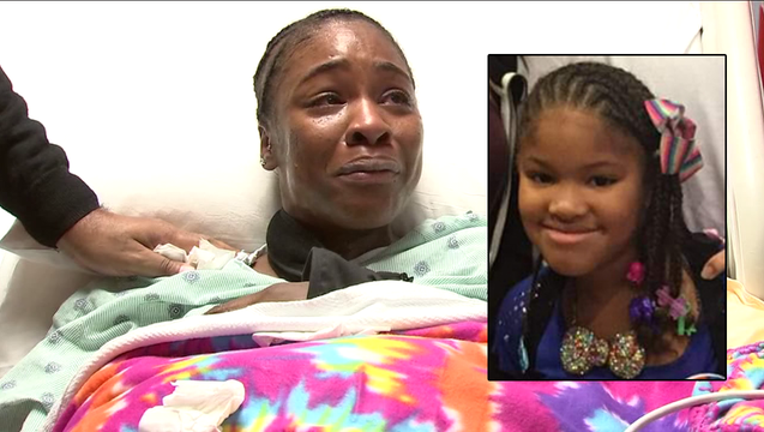 HOUSTON (FOX 26) - Her 7-year-old daughter was shot to death on Sunday and she, herself, is still in the hospital, but this mother in mourning is speaking out.  LaPorsha Washington hopes doing so will help catch her daughter’s killer.

From her hospital bed, Washington told a story that is certainly the stuff nightmares are made of. She says she and her daughters came face to face with evil and at the end of the encounter her 7-year-old daughter Jazmine Barnes was dead.

"This man took her away from us," she says. "You can’t be a human being doing something like this. You can’t."

When Washington woke up this morning, two days after her 7-year-old daughter was shot to death, she asked her best friend if it was all a bad dream.

"And we just looked at each other and then the news came on and my baby’s face popped up on the news, like this is not a dream,” Washington cries.

On Sunday, the mother of four and her daughters, ages 6 to 15 were off to an early start, headed to get coffee for mom. Then at a stop light on the East Sam Houston Parkway feeder near Wallisville Road, the man with a beard in the pickup truck next to them caught the 15-year-old’s eye.

"I was in the passenger seat and he was on my side and I looked at him and he looked at me and when the light turned green we just started going,” explains 15-year-old Alxis Dilbert.  Seconds later the man began shooting into the car full of four little girls and their mom, staring at them as he opened fire.

"He had blue eyes and a black hoodie on. He had no remorse. He looked my child right in the eye. He knew she was a baby,” says Washington.

"He was white and he had blue eyes. He had a hoodie on. His nose was kind of pointy and he looked like he was on drugs or something because his face was really pale,” says Alxis.

”She was on the door and I already knew because I saw the blood on the door.  So I knew already but I didn’t want to say it,” says the 15-year-old.

Still Washington tried driving her baby to the hospital until a shot out tire stopped them on the freeway.

With her mother losing consciousness and her 7-year-old sister shot dead, Alxis got out begging passing drivers for help.

“Everything now is blank.  I can barely think straight.  I’m the oldest so I feel like I should be strong and support my sisters but I’m hurting too,” says Alxis.

Who is this man who opened fire on a mother and four little girls?  Investigators have released a surveillance picture of the red pick up truck the killer is believed to have been driving.

"I’m praying for her to walk through that door and hug me and kiss me and tell me everything is OK and she’s not,” says the grieving mom.

Investigators believe the shooting was unprovoked.  They say the man who had a beard and was driving a red pick up truck may have now altered his appearance in some way.  They also believe he will tell someone what he did.  Detectives hope that person will help give this family justice.