More than 100 people had to spend the night on a highway, including nearly 30 who took refuge in a tunnel.

Dozens of people in Glenwood Springs, Colorado, were forced to spend the night on the highway — some inside a tunnel — after a mudslide buried part of a major interstate last week.

Interstate 70, which is Colorado’s main east-west thoroughfare through the Rocky Mountains, had "extreme damage" and remained blocked with piles of boulders and logs. A 46-mile stretch was closed with no timeline for reopening. Transportation officials this week advised long-distance truckers to detour north through Wyoming.

The mudslides happened Thursday night and were triggered by rain in an area burned by a wildfire.

More than 100 people had to spend the night on a highway, including nearly 30 who took refuge in a tunnel.

Those in the tunnel were stuck for about nine hours until crews could carve out a path through the mud to reach them at about 6:30 a.m. Friday, Garfield County Sheriff's Office spokesman Walt Stowe said. 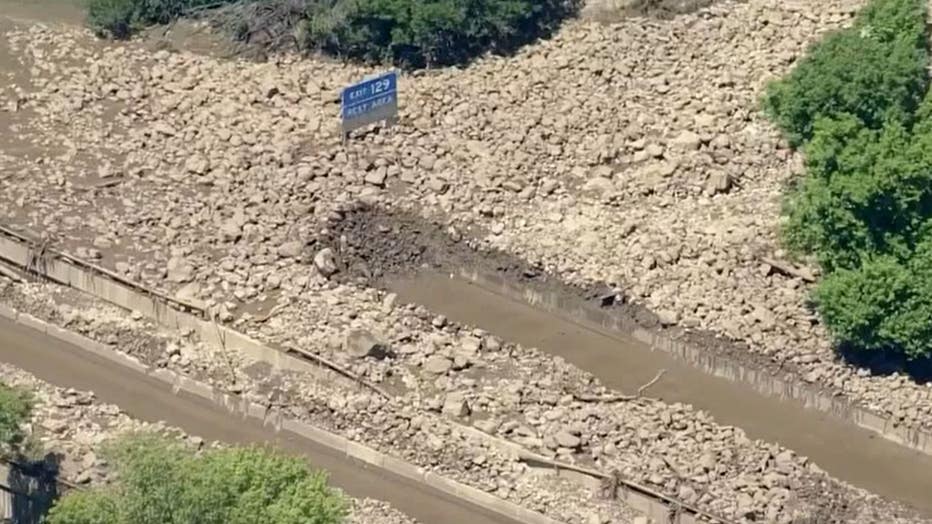 Between 65 and 70 people remained stranded at a rest stop later that afternoon as crews worked to punch a safe passage through the debris.

Mike Goolsby, a regional director for the transportation department, said the area was affected by about 10 slides, some 12 feet deep and up to 150 feet wide.

"I'm very grateful that no one was hurt. ... We’ve tried our hardest not to have people in the canyon when these flash flood warnings hit, but it was the best-case scenario for all of us based on the outcome," he said.

Colo. Gov. Jared Polis said the cleanup could continue to take "days or weeks" to complete, with the state reportedly preparing to issue a disaster declaration.

Glenwood Canyon has cliffs towering up to 2,000 feet above the Colorado River, making it prone to rockslides and mudslides. In recent weeks, rain over the area burned by a wildfire last summer has triggered frequent slides, resulting in closures of I-70. The closures have mostly occurred before the storm moves in, to prevent people from being trapped.

On Thursday, the canyon had temporarily closed earlier in the day as one storm cell approached but had reopened by the time a second storm cell moved in, which led to the vehicles and their passengers getting trapped.

The torrent of rocks that came tumbling down the canyon's steep walls smashed apart sections of the concrete roadway and sheared off a long section of steel guardrail, photos provided by state officials showed.

"It's not just clearing the debris. There's also the damage," said Colorado Department of Transportation spokesperson Tamara Rollison. "Our engineering staff have never seen anything like this before."

She said once crews can better assess the damage, they’ll have a better idea of when it can reopen.